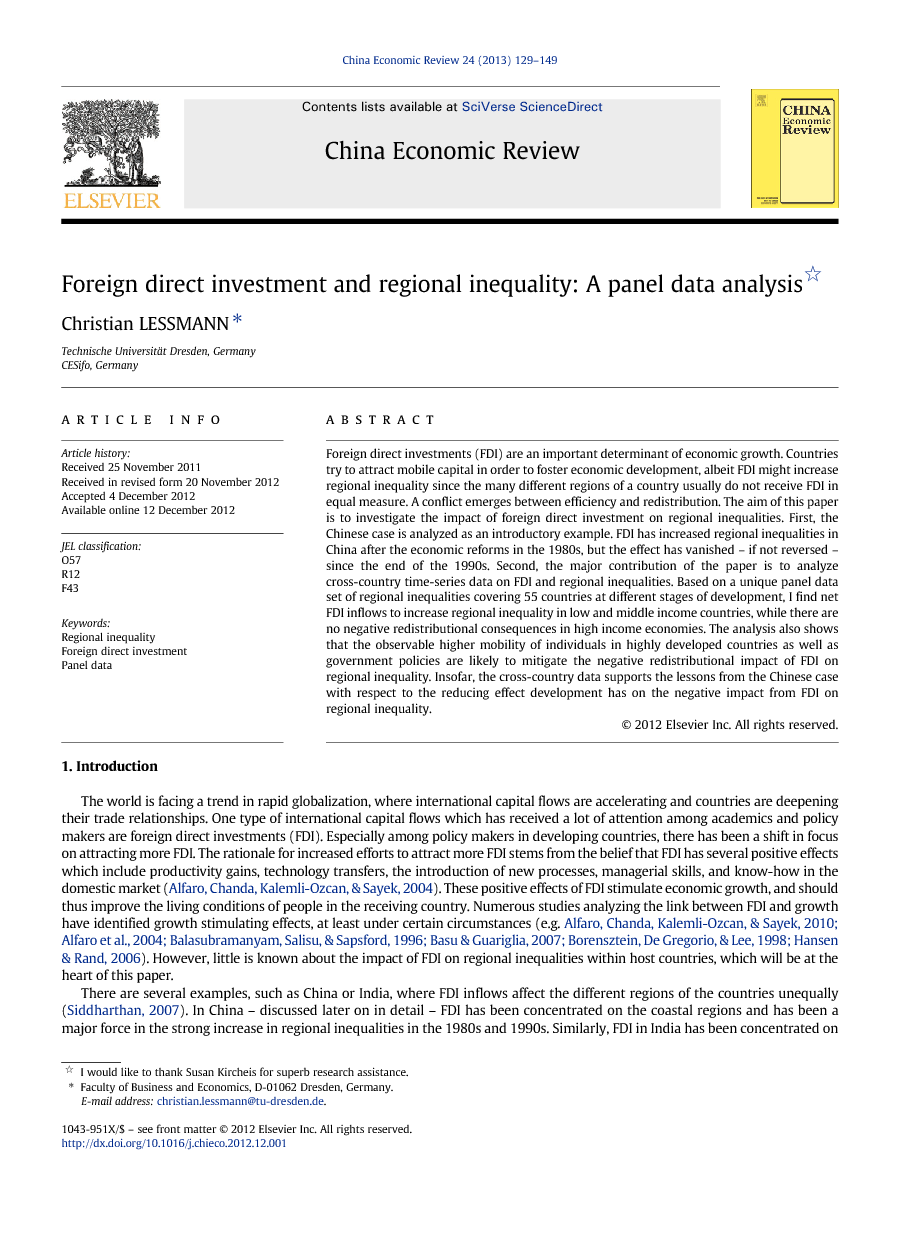 Countries try to attract foreign direct investments (FDI) in order to stimulate economic growth. At the same time, FDI might cause a rise in regional inequality, since capital investments usually distribute asymmetrically among the different regions of a country as the examples of China and India suggest. Increasing interregional inequalities may cause conflicts and increase undesirable interpersonal inequalities. Against this background, this paper studies the impact of FDI on regional inequality. This is particularly important, since studies on inequality and conflict suggest that vertical inequality – e.g. measured by the Gini coefficient of household incomes – is not robustly related to conflict measures, while horizontal inequality is (see Buhaug et al., 2012, Deiwiks et al., 2012, Lessmann, 2012b and Stewart, 2000). Economic theory suggests that the level of economic development has an impact on the FDI–regional inequality nexus. The higher the interregional mobility of individuals and the more effective government policies are in reallocating resources between regions, the weaker the negative redistributional consequences from FDI inflows should be. Both conditions are less appropriate for low and middle income countries than high income economies, therefore I hypothesize that the negative impact of FDI on regional inequality decreases with a higher level of economic development. The existing literature on FDI and regional inequality focuses on China or Chinese provinces; because of this the analysis starts with a review of the well-known Chinese case supplemented by some recent data. After the opening of the economy in the 1980s FDI inflows increased rapidly causing a sharp rise in regional inequality. As a reaction, the Chinese government started in the mid 1990s to channel FDI inflows to less developed western regions. Some recent data shows that this government intervention was successful, as regional inequalities have been falling since this time. Thus, during China's development from a low to a middle income economy, the negative redistributional consequences from FDI inflows vanished as suggested by the theoretical framework. The Chinese experience creates a motivation to study a cross-section of countries in order to be able to generalize the research findings. For this purpose, a unique data set of regional inequalities in 55 countries at all stages of economic development for the period 1980–2009 is analyzed in this paper. Panel regressions suggest that the Chinese experience also applies to the broader data set: While FDI fosters regional inequalities in low and middle income countries, the negative redistributional effects do not occur in high income economies. The estimations also suggest that the fit of the empirical model is much better for medium- and long-term data than for analyzing short run effects. Instrumental variable regressions considering issues related to weak instruments support the major findings. Finding economic development – as measured by the log of the GDP p.c. – to be an important determinant for the FDI–regional inequality nexus is interesting, but still somewhat unsatisfactory, since one cannot disentangle whether the higher mobility of factors is responsible for this result or government policies. Therefore, I have tried to find suitable approximations for both determinants “mobility of individuals” and “government reallocation policies”. Although the proxy variables are disputable, the estimations imply that both conditioning factors are important. In this respect, the evidence from the cross-section supports the Chinese experience, where government policies were the major determinant of the diminishing the negative impact of FDI on regional inequality (Wei et al., 2009). The findings of this study are compatible with the existing literature on FDI and growth. An important contribution is Alfaro et al. (2004) who find the relationship between FDI and growth to depend on the quality of financial institutions: the better the financial institutions of FDI hosting countries, the stronger is the growth enhancing effect of FDI. If we assume in line with Levine and Zervos (1998) that the quality of financial institutions – call it financial development – highly correlates with the level of economic development, than the findings of Alfaro et al. (2004) implies that high developed countries benefit stronger from FDI compared to less developed countries. This result may be driven at least to some extent by the negative redistributive effect of FDI on regional inequality in developing countries as this analysis shows. As discussed by Kanbur and Zhang (2005) regional inequality promotes interpersonal income inequality, which have a dampening effect on economic growth (Alesina & Rodrik, 1994). In light of the empirical findings, the policy conclusion from this analysis is that if governments aim to alleviate the negative redistributional consequences from FDI inflows as they occur in low and middle income countries, policies pointing at increased mobility of factors – such as enhanced infrastructure provision – seem to be appropriate as well as direct interventions through government expenditures.