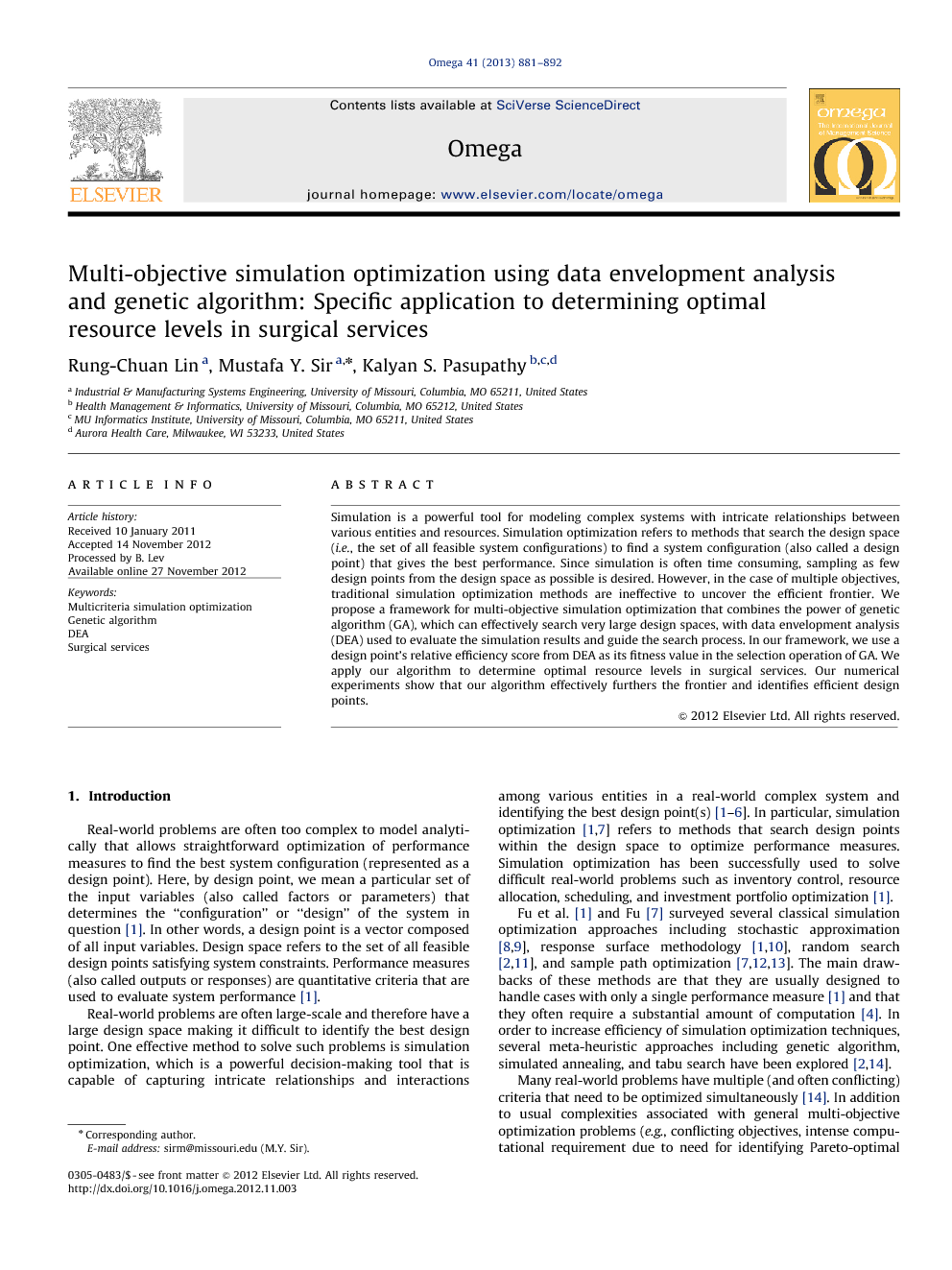 Simulation is a powerful tool for modeling complex systems with intricate relationships between various entities and resources. Simulation optimization refers to methods that search the design space (i.e., the set of all feasible system configurations) to find a system configuration (also called a design point) that gives the best performance. Since simulation is often time consuming, sampling as few design points from the design space as possible is desired. However, in the case of multiple objectives, traditional simulation optimization methods are ineffective to uncover the efficient frontier. We propose a framework for multi-objective simulation optimization that combines the power of genetic algorithm (GA), which can effectively search very large design spaces, with data envelopment analysis (DEA) used to evaluate the simulation results and guide the search process. In our framework, we use a design point's relative efficiency score from DEA as its fitness value in the selection operation of GA. We apply our algorithm to determine optimal resource levels in surgical services. Our numerical experiments show that our algorithm effectively furthers the frontier and identifies efficient design points.

In this paper, we develop a framework for multi-objective simulation optimization that combines the genetic algorithm with data envelopment analysis used to evaluate the simulation results and guide the search process of genetic algorithm. To evaluate the effectiveness of our algorithm in terms of finding Pareto-optimal design points and furthering the efficient frontier, we define two metrics, namely average efficiency score and percentage of efficient design points in each generation, with respect to an approximation of the “true” frontier obtained by sampling a large number of design points from the design space. The DEA component in our framework evaluates the efficiency relative to the current design points and all efficient design points identified in previous generations instead of simply evaluating the efficiency of design points in the current generation relative to each other. This substantially improves the discriminatory power of DEA and helps distinguishing truly efficient design points from inefficient ones. This approach, to the best of our knowledge, has not been used before in the works that combine GA and DEA. Our framework has been applied to a case study to identify efficient design points that correspond to Pareto-optimal usage of resources in surgical services. Surgical services are a complex system where several resources interact with each other and are used in multiple stages and high uncertainty in surgical procedure durations makes scheduling a challenge. For these reasons, it is not easy to establish analytical relationships between the input variables and performance measures. The numerical experiments demonstrate the applicability of the framework and the effectiveness of the algorithm to search large design spaces of complex systems such as surgical services. As shown in the case study, the algorithm approximates the overall efficient frontier by iteratively identifying design points that are increasingly efficient. Such a method can be adapted and used in other application domains. One inherent assumption in many of the DEA models is that the inputs and outputs should conform to interval scale implying that equal intervals of the scale have the same value. When this is coupled with the freedom to select weights for inputs and output, the underlying implication is that of a linear value function [77]. However, not all problems lend themselves to such a linearity assumption. Future research will focus on ways to relax the linearity assumptions in the formulations and adapt the framework proposed here. Another important future research direction is to apply our framework to problems where inputs are not comparable in the usual economic sense such as optimizing surgery schedules, which would be represented as inputs in the DEA component of our framework. Lovell and Pastor studied several radial DEA models without (or with constant) inputs or outputs [78]. These types of models can be used to extend our framework to simulation optimization problems where decision variables cannot be readily fit into a DEA model as inputs. In its current form, important qualitative variables such as quality of care cannot be readily incorporated into our GA/DEA framework. Since the omission of such significant variables in DEA has serious implications, future work will focus on incorporating these variables such as quality of care in strategic optimization of resource levels in surgical services. Lastly, a promising research direction is to incorporate a multi-objective computing budget allocation method into our framework to more efficiently allocate simulation replications subject to a limited simulation budget [21] and [27].