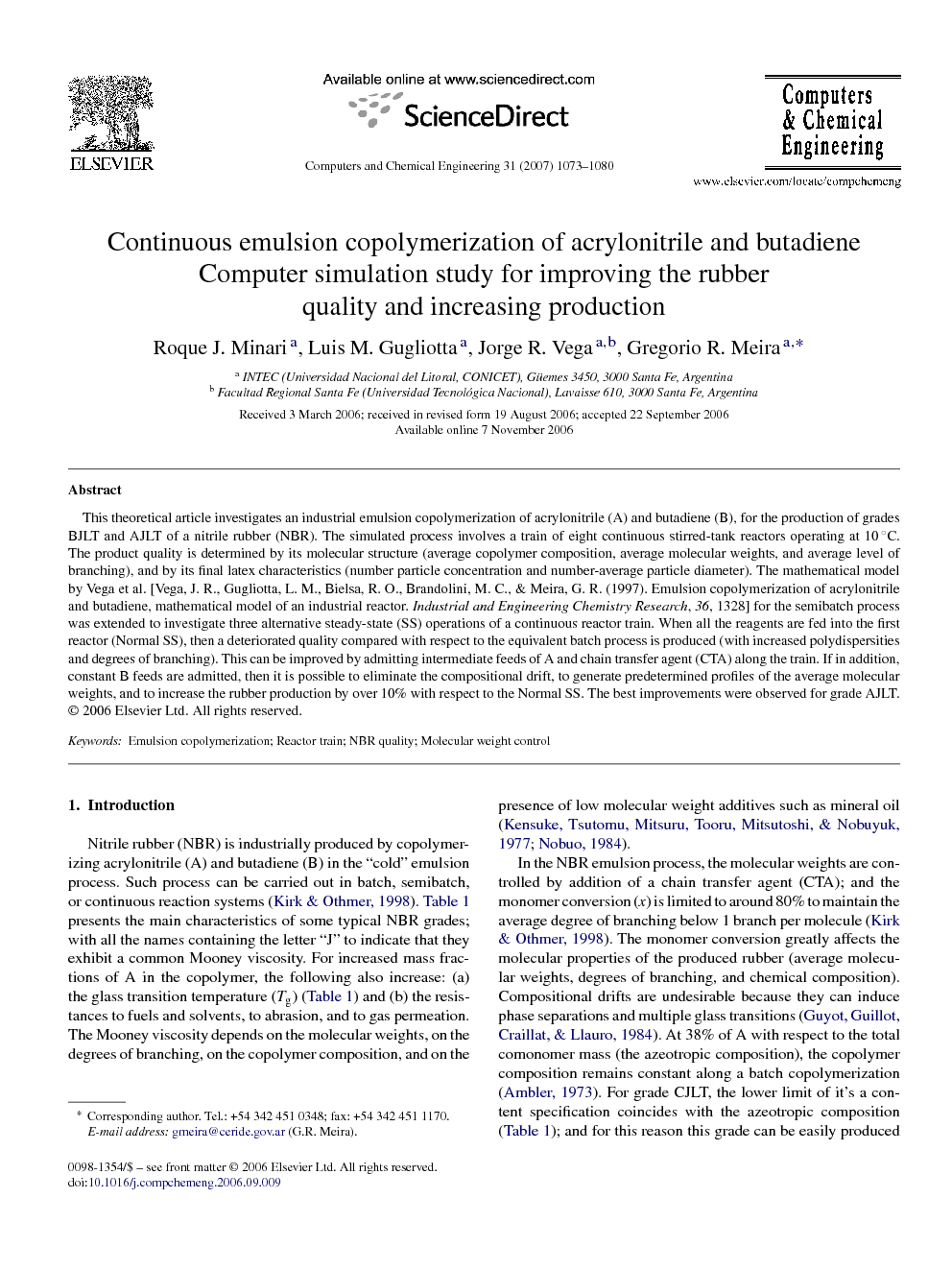 This theoretical article investigates an industrial emulsion copolymerization of acrylonitrile (A) and butadiene (B), for the production of grades BJLT and AJLT of a nitrile rubber (NBR). The simulated process involves a train of eight continuous stirred-tank reactors operating at 10 °C. The product quality is determined by its molecular structure (average copolymer composition, average molecular weights, and average level of branching), and by its final latex characteristics (number particle concentration and number-average particle diameter). The mathematical model by Vega et al. [Vega, J. R., Gugliotta, L. M., Bielsa, R. O., Brandolini, M. C., & Meira, G. R. (1997). Emulsion copolymerization of acrylonitrile and butadiene, mathematical model of an industrial reactor. Industrial and Engineering Chemistry Research, 36, 1328] for the semibatch process was extended to investigate three alternative steady-state (SS) operations of a continuous reactor train. When all the reagents are fed into the first reactor (Normal SS), then a deteriorated quality compared with respect to the equivalent batch process is produced (with increased polydispersities and degrees of branching). This can be improved by admitting intermediate feeds of A and chain transfer agent (CTA) along the train. If in addition, constant B feeds are admitted, then it is possible to eliminate the compositional drift, to generate predetermined profiles of the average molecular weights, and to increase the rubber production by over 10% with respect to the Normal SS. The best improvements were observed for grade AJLT.

Nitrile rubber (NBR) is industrially produced by copolymerizing acrylonitrile (A) and butadiene (B) in the “cold” emulsion process. Such process can be carried out in batch, semibatch, or continuous reaction systems (Kirk & Othmer, 1998). Table 1 presents the main characteristics of some typical NBR grades; with all the names containing the letter “J” to indicate that they exhibit a common Mooney viscosity. For increased mass fractions of A in the copolymer, the following also increase: (a) the glass transition temperature (Tg) (Table 1) and (b) the resistances to fuels and solvents, to abrasion, and to gas permeation. The Mooney viscosity depends on the molecular weights, on the degrees of branching, on the copolymer composition, and on the presence of low molecular weight additives such as mineral oil (Kensuke, Tsutomu, Mitsuru, Tooru, Mitsutoshi, & Nobuyuk, 1977; Nobuo, 1984). In the NBR emulsion process, the molecular weights are controlled by addition of a chain transfer agent (CTA); and the monomer conversion (x) is limited to around 80% to maintain the average degree of branching below 1 branch per molecule (Kirk & Othmer, 1998). The monomer conversion greatly affects the molecular properties of the produced rubber (average molecular weights, degrees of branching, and chemical composition). Compositional drifts are undesirable because they can induce phase separations and multiple glass transitions (Guyot, Guillot, Craillat, & Llauro, 1984). At 38% of A with respect to the total comonomer mass (the azeotropic composition), the copolymer composition remains constant along a batch copolymerization (Ambler, 1973). For grade CJLT, the lower limit of it's a content specification coincides with the azeotropic composition (Table 1); and for this reason this grade can be easily produced in batch reactors. In contrast, large compositional drifts are expected in the batch production of grade AJLT, with a decreasing mass fraction of A in the copolymer. The NBR emulsion process has been previously modeled by Dubé, Penlidis, Mutha, and Cluett (1996), Vega et al. (1997), and Rodríguez, Estenoz, Gugliotta, and Meira (2002). Vega et al. (1997) investigated the industrial batch production of grade BJLT with tert-dodecyl mercaptan as CTA. They observed that while the number-average molecular weight View the MathML source remained essentially constant along the reaction, the weight-average molecular weight View the MathML source and the average number of trifunctional branches per molecule View the MathML source both steadily increased. Also, an almost constant chemical composition could be produced by applying several discrete pulses of A (i.e. varying amounts of A added along short periods of time). The model by Vega et al. (1997) was later applied in Gugliotta, Vega, Antonione, and Meira (1999) and in Vega, Gugliotta, and Meira (2002), for estimating the monomer conversion, the copolymer composition, the average molecular weights, and the average degree of branching, on the basis of calorimetric measurements. In Vega et al. (2002), several (model-based and closed-loop) semibatch strategies were developed for controlling such estimates. Styrene–butadiene rubber (SBR) is normally produced in continuous emulsion processes; and several articles have been published in relation with their steady-states (SSs) and dynamic control. In contrast, no publications have been found on the continuous production of NBR. For continuous emulsion processes, Hamielec and MacGregor (1983) proposed to feed the comonomers mixture into the first reactors of the train for maximizing the polymer production by reducing the total “inert” monomer droplets volume. Following this idea, Vega, Gugliotta, Brandolini, and Meira (1995) and Minari, Vega, Gugliotta, and Meira (2006) suggested to simultaneously feeding CTA along the train for improving the final SBR quality. This theoretical work optimizes the SS operation of a continuous NBR process with the aims of: (i) eliminating the copolymer compositional drift and reproducing the average molecular weights of an equivalent batch process, without imposing a fixed final monomer conversion and (ii) increasing the polymer production, at a fixed final conversion, while simultaneously eliminating the compositional drift and reproducing the final molecular weights, degrees of branching, and particle characteristics of an equivalent batch process.

A train of CSTRs broadens the distribution of residence times with respect to an equivalent batch copolymerization. For this reason, the products of the Normal SS operations (where all the reagents are fed into the first reactor), exhibit increased values of the molecular weight polydispersity and average degree of branching. Two levels of improvement were proposed. The first level of improvement admitted intermediate constant feeds of CTA and A (i.e. the most reactive comonomer), with the result of reducing the molecular weight polydispersity and the degree of branching with respect to the Normal SSs, and with a more uniform copolymer composition. In a second level of improvement, constant feeds of B were also admitted; and in this case it is possible to further improve molecular properties, while simultaneously increasing production. In both cases, slightly increased consumptions of A and CTA are however required. For grade BJLT, the intermediate additions of A and CTA seems little justified, due to the negligible rubber quality improvements at an almost constant production. However, the second level of improvement increases BJLT production by 13%. For grade AJLT, both levels of improvement seem justifiable, since production increases by 8% with the first level of improvement, and by 14% with the second level of improvement. Intermediate reagent additions are uncommon in continuous NBR processes. However, the extra costs involved in equipment and in operation seem justified from the points of view of increasing production (in both grades), and of improving rubber quality in grade AJLT. The developed SS policies involved feeding the comonomers and CTA into most of the reactors in the train. However, suboptimal SS solutions are also feasible, by restricting the intermediate feeds to only two or three reactors.