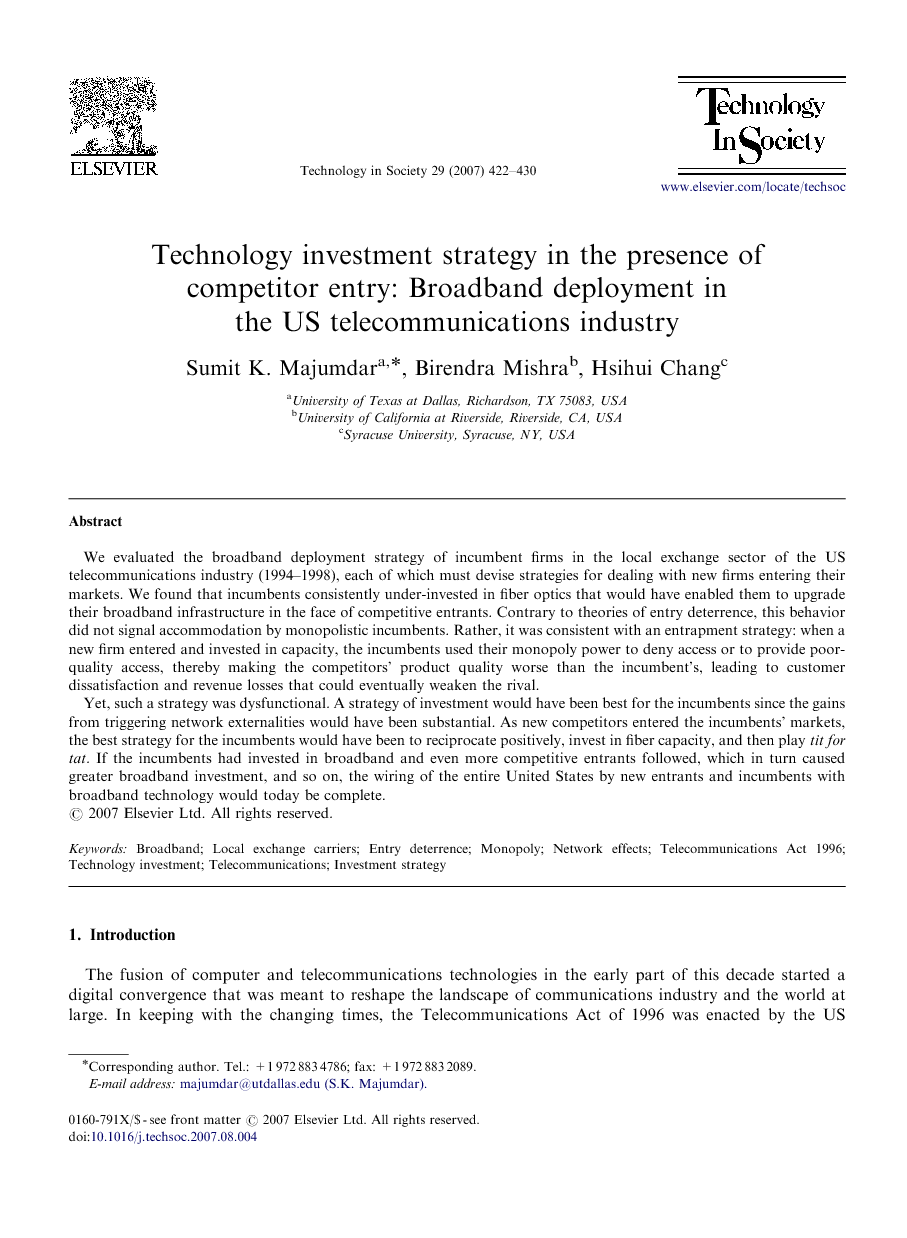 We evaluated the broadband deployment strategy of incumbent firms in the local exchange sector of the US telecommunications industry (1994–1998), each of which must devise strategies for dealing with new firms entering their markets. We found that incumbents consistently under-invested in fiber optics that would have enabled them to upgrade their broadband infrastructure in the face of competitive entrants. Contrary to theories of entry deterrence, this behavior did not signal accommodation by monopolistic incumbents. Rather, it was consistent with an entrapment strategy: when a new firm entered and invested in capacity, the incumbents used their monopoly power to deny access or to provide poor-quality access, thereby making the competitors’ product quality worse than the incumbent's, leading to customer dissatisfaction and revenue losses that could eventually weaken the rival. Yet, such a strategy was dysfunctional. A strategy of investment would have been best for the incumbents since the gains from triggering network externalities would have been substantial. As new competitors entered the incumbents’ markets, the best strategy for the incumbents would have been to reciprocate positively, invest in fiber capacity, and then play tit for tat. If the incumbents had invested in broadband and even more competitive entrants followed, which in turn caused greater broadband investment, and so on, the wiring of the entire United States by new entrants and incumbents with broadband technology would today be complete.

The fusion of computer and telecommunications technologies in the early part of this decade started a digital convergence that was meant to reshape the landscape of communications industry and the world at large. In keeping with the changing times, the Telecommunications Act of 1996 was enacted by the US Congress to update the Communications Act of 1934 and provide a new framework that relies on competition and market forces to advance the deployment of advanced communications infrastructures. One of the salient features of the act was that it strove to provide a level playing field for competitive local exchange carriers that sought to challenge the dominance of incumbent local exchange carriers (ILEC). The incumbent firms, mostly the ‘‘Baby Bell’’ operating companies, controlled the local loop—the connection from the home or business to the local switch—for over 100 years. The 1996 Act outlined the rules by which the incumbents would have to open up their networks so new competitors could interconnect and offer comparable services to local subscribers. At one time there were approximately 2000 new competitors in the United States. Yet, according to the Federal Communications Commission (FCC), by the turn of the 21st century the combined market share of these new competitors was less than 5%. The monopolistic incumbents still dominated the market, and of course, now the competitors are extinct. We investigated incumbent firms’ investment strategies in broadband capacity in the face of emergent competitive threats from new competitors. The issue of rivalry between incumbents and new entrants is ageold, and has received continual attention both from theorists and empirical scholars of strategy. There is scant evidence of incumbent behavior in response to entry threats in the communications sector because for so long the sector was a monopoly [1]. The 1996 Act provided fertile ground investigating incumbent firms’ behavior when faced with entry by competitors. We used data from the FCCs Statistics of Communications Common Carriers [2], the Federal-State Joint Board Monitoring Reports [3], and a report on Competition in the Telecommunications Industry [4]. Our results cover the period both before the Act of 1996 went into effect as well as after its implementation. We found that incumbent firms consistently under-invested in optical fiber when faced with competitive threats from new entrants. However, contrary to the classic theory of entry deterrence, this was not a signal of accommodation by the monopolistic incumbents that faced new entries into the market. Rather, underinvestment by a monopolist firm suggested that the monopolist was unwilling to share the market with entrants and unwilling to provide interconnection facilities to new entrants, which eventually created a scarcity of capacity. Unavailability of capacity would, then, render new competitors’ business models unsustainable. Consistent with this strategy, we found that an incumbent firm invested less in broadband when it held a higher proportion of business lines in its operating domain, thus not allowing the entrant to share potential opportunities in relatively lucrative market segments.

The intent of the Act of 1996 was to transform the telecommunication industry in the United States from a regulated monopoly to one that was fully competitive, unleashing market forces to lower consumer rates and accelerate deployment of broadband services throughout the nation. A report on the availability of broadband access put the total number of lines at just over 10 million in the early part of the 21st century. Approximately one-quarter of these were deployed by ILECs. Recalling the promises made by incumbent firms to invest in advanced networks while negotiating favorable terms from regulators, it must be noted that had the incumbent firms delivered on their promises, more than half of the United States would have been connected to fiber optic networks by early in the 21st century. However, this did not happen, and the gross under-investment by incumbent firms in the face of new competitive entrants is puzzling at best. On the other hand, what did occur was the gradual extinction of the new entrants, after an initial rush of entry following the implementation of the Act of 1996. We investigated broadband deployment strategies by the incumbent firms to understand and possibly explain how some pieces of this puzzle came together. We found that the incumbent firms consistently under-invested in optical fiber in the face of entry by new competitive local exchange carriers. These results were robust after controlling for a variety of factors that would influence broadband investment levels within the sector. Contrary to theories of entry deterrence, this approach did not signal accommodation by the monopolistic incumbent. In fact, this strategy was consistent with what we have called entrapment whereby the incumbents under-invested in fiber capacity when faced with new entrants. After a new firm entered the market and invested in its own capacity, the incumbent behaved like a top dog and used its market power to sap the entrant by either denying or providing poor-quality access, thereby leading to a degradation of the entrant’s business by making its product quality worse than that of the incumbent’s. This led to customer dissatisfaction and revenue drops that eventually weakened the rival such that it became a potential merger target or it exited the market after a brief period of intense competition. Our results also provided some oblique and indirect pointers about the anti-competitive behavior of incumbents, which, in the absence of direct confirming evidence, might at best be speculative as to why the new entrants became extinct in the United States within such a short space of time. Paradoxically, adopting a fat cat strategy in the face of competitive entry was the best for incumbents, not just from a pro-competitive stance, but because gains from triggering network externalities were substantial One has only to look at the success of open-source software to realize that the gains accruing from openness are substantial once bandwagon effects are triggered within a context in which network externalities are the dominant characteristic. Or one can look at the growth of the cable sector and the voice-over-Internetprotocol (VoIP) telephony sector—both competitors against incumbents—to realize that market opportunities in the United States are substantial. Perhaps the incumbents were faced with a prisoners’ dilemma situation, i.e., to invest or not invest as their strategic choice, while the entrants’ choice was to enter or not enter. As new competitors entered the incumbents’ markets, the best strategy for the incumbents was the seminal approach recommended by Axelrod [32]: to reciprocate positively, implying investment in the face of entry, and then play tit for tat. If, in identifying the optimal strategy for breaking the deadlock, the incumbents had invested in broadband, followed by more competitive entry, and thereafter greater broadband investment, and so on, the complete broadband wiring of all of the United States by the new entrants and the incumbents by now be complete.