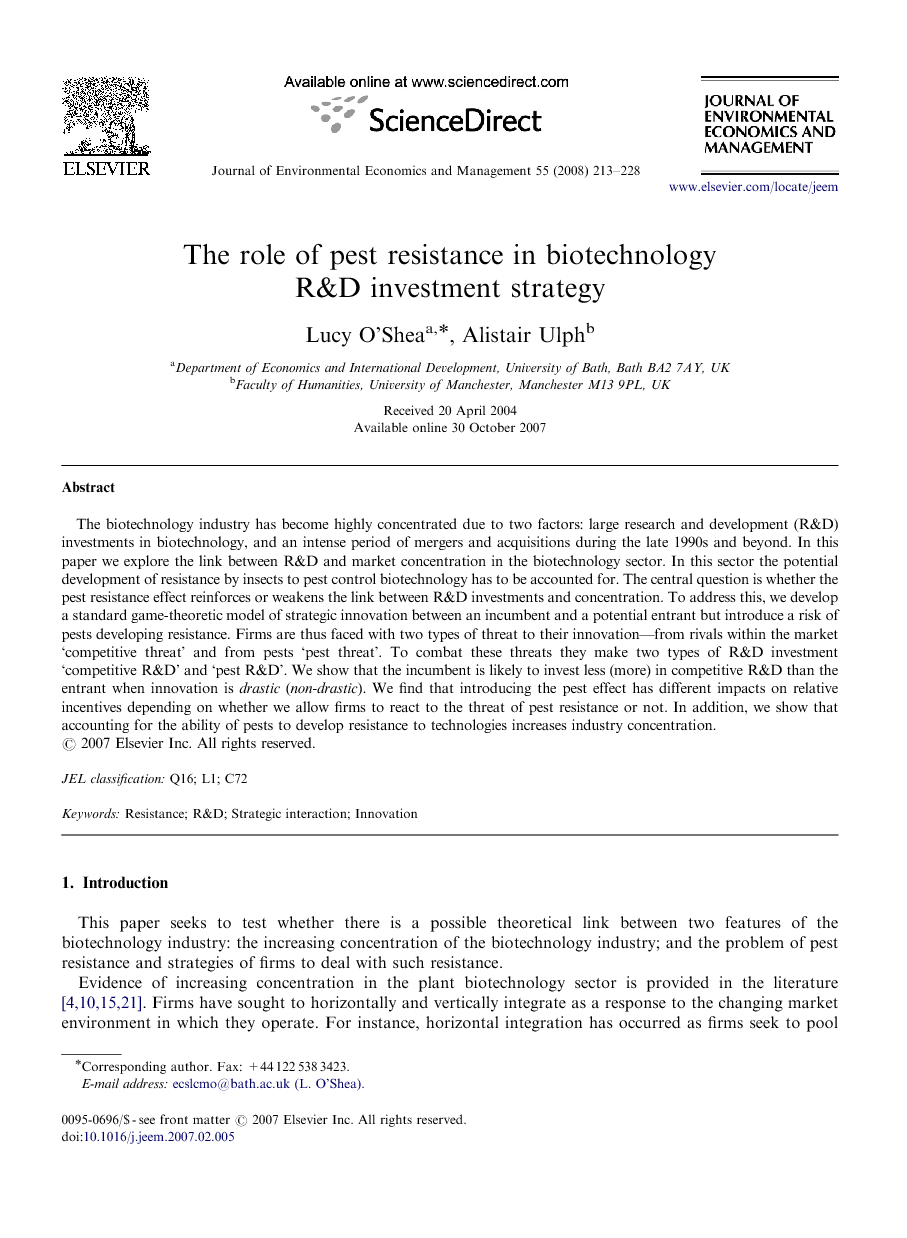 The biotechnology industry has become highly concentrated due to two factors: large research and development (R&D) investments in biotechnology, and an intense period of mergers and acquisitions during the late 1990s and beyond. In this paper we explore the link between R&D and market concentration in the biotechnology sector. In this sector the potential development of resistance by insects to pest control biotechnology has to be accounted for. The central question is whether the pest resistance effect reinforces or weakens the link between R&D investments and concentration. To address this, we develop a standard game-theoretic model of strategic innovation between an incumbent and a potential entrant but introduce a risk of pests developing resistance. Firms are thus faced with two types of threat to their innovation—from rivals within the market ‘competitive threat’ and from pests ‘pest threat’. To combat these threats they make two types of R&D investment ‘competitive R&D’ and ‘pest R&D’. We show that the incumbent is likely to invest less (more) in competitive R&D than the entrant when innovation is drastic (non-drastic). We find that introducing the pest effect has different impacts on relative incentives depending on whether we allow firms to react to the threat of pest resistance or not. In addition, we show that accounting for the ability of pests to develop resistance to technologies increases industry concentration.

This paper seeks to test whether there is a possible theoretical link between two features of the biotechnology industry: the increasing concentration of the biotechnology industry; and the problem of pest resistance and strategies of firms to deal with such resistance. Evidence of increasing concentration in the plant biotechnology sector is provided in the literature [4], [10], [15] and [21]. Firms have sought to horizontally and vertically integrate as a response to the changing market environment in which they operate. For instance, horizontal integration has occurred as firms seek to pool research and development (R&D) resources to exploit economies of scale and scope, increase the rate of innovation and reduce the unit cost of acquiring regulatory approval [10]. Vertical integration has occurred in response to the increasing relative importance of distribution and marketing channels to deliver the technology as it becomes commercialised.1 In addition to the market environment influencing the R&D strategies of these firms, a smaller number of firms are determining the direction and rate of innovation [4] and [9]. An increasingly important part of these firms’ investment portfolios is expenditure on extending the life of their technology, specifically through strategies aimed at delaying the development of pest resistance to the technology [2]. The substantial R&D and regulatory costs involved in bringing an innovation to the market limit the possibility of having a range of ‘back-up’ technologies should the current one fail. Many firms have collaborations with entomologists researching the dynamics of pest resistance. For example, Monsanto has extensive projects with scientists studying resistance in cotton pests [2]. In general, spending on the management of resistance by firms is substantial and rising [25]. Previous work on resistance within an industrial organisation framework has focused on how market structure affects the development of resistance, noting that, because monopolists suboptimally supply the market and resistance is positively related to the use of technology, the development of resistance will be slower than if the market is supplied competitively [2], [5], [12] and [19].2 Our paper takes a different stance: we address the implications of pest resistance for investment in R&D and how this in turn affects market structure.3 To think about this, consider the simplest case where there is a single (monopolistic) firm deciding how much to invest in a new technology, given that both it and its existing technology are subject to a given, exogenous, risk of pest resistance. It is straightforward to see that in such a situation, the effects of pest resistance on investment in R&D are ambiguous. By reducing the returns to future technology, pest resistance reduces the incentive to innovate. By reducing the returns to existing technology, it increases the incentive to innovate. Which effect dominates depends on how profitable the current technology is. In this paper, we go beyond this simple analysis in two respects. First we allow for firms to affect the risk of pest resistance by their choice of R&D. Second, we conduct our analysis in a context where there are strategic interactions between firms in both the product market and R&D. These strategic interactions affect market structure. Using a conventional model of strategic R&D between an incumbent and an entrant, introducing pest resistance and the possibility of using R&D to reduce pest resistance, we study both absolute and relative incentives to invest in R&D. As in the simple monopoly story, pest resistance reduces the returns to current and new technologies. However, it is not immediately clear whether it scales down all profits equally and hence, relative incentives remain unchanged, or whether there is a differential impact on incentives and hence, on market structure. In the following we distinguish between two categories of R&D investment. A firm faces two threats to the survival of its technology—from its rival and from pests. In response, it invests in R&D to stay ahead of its rival, which we will refer to as ‘competitive R&D’, and it also invests in R&D to combat pest resistance, which we will refer to as ‘pest R&D’. There are two possible outcomes of competitive R&D. The first is drastic innovation, where the new technology is so efficient it wipes out the incumbent's existing technology. The second is non-drastic, where the new and old technologies can co-exist in the market. We show that the incumbent is likely to invest less (more) in competitive R&D than the entrant when innovation is drastic (non-drastic). We find that introducing the pest effect has an opposing (reinforcing) impact on the gap between the competitive R&D of the incumbent and entrant, depending on whether or not we allow firms to react to the threat of pest resistance when innovation is drastic (non-drastic). In addition, we show that when we include pest resistance in the case of non-drastic innovation, industry concentration rises.

In this paper, we have considered the problem of resistance by pests and how it might affect the incentive to carry out R&D. We noted that in the simple case of a single firm, resistance could act as a positive or negative force on the incentive to carry out R&D with the net effect depending on the size of current profits. To answer the question of how resistance by pests might alter the incentives to carry out R&D when there is more than one firm, we set up a simple model of strategic innovation. Using this model, we examined relative incentives for the incumbent and the entrant under three pest regimes and two types of innovation. The regimes considered covered the benchmark case of no pest resistance, exogenous pest risk where firms could only invest in competitive R&D and endogenous pest risk where, in addition to competitive R&D, they could also invest in pest R&D. Our combined results from the analysis and simulations enable us to conclude that the incumbent will tend to invest less (more) than the entrant under drastic (non-drastic) innovation across all three pest regimes. The link between pest resistance and industry concentration was highlighted by focusing on the absolute incentive of the entrant in the non-drastic case. Our simulations showed that the introduction of pest resistance reduces the probability of duopoly, more so with exogenous risk than with endogenous risk. Hence, we could conclude that industry concentration rises when the pest effect is accounted for. This finding reflects what we have observed in the plant biotechnology industry, where the number of major players has contracted as firms engage in vertical and horizontal integration, as discussed at the outset of the paper. The general message of this paper is that introducing additional dimensions to R&D investment decisions, such as, increasing pest resistance or durability of an innovation has effects on both absolute and relative incentives to invest in R&D and hence on market concentration. This clearly has potential implications for policy, though we have not attempted the full welfare analysis that would be required for such policy analysis, since that would go beyond the scope of this paper. For example, this paper has focused on the strategic interaction in firms’ R&D decisions, which can lead to overinvestment in R&D, so the additional investment firms make in competitive R&D to protect themselves against a rival in the non-drastic case could be welfare-reducing. But R&D policy also needs to consider positive spillovers from R&D investments, which can lead firms to underinvest in R&D. Another externality that can arise in the present context is that of cross-resistance. In providing incentives for innovation through the institution of patents, policy should discourage the emergence of conditions whereby exposure to one technology produces resistance in pests to later technologies. The interaction between resistance and patent design and the role of policy when firms’ response to resistance by pests is to combine genes together are subjects for future research.