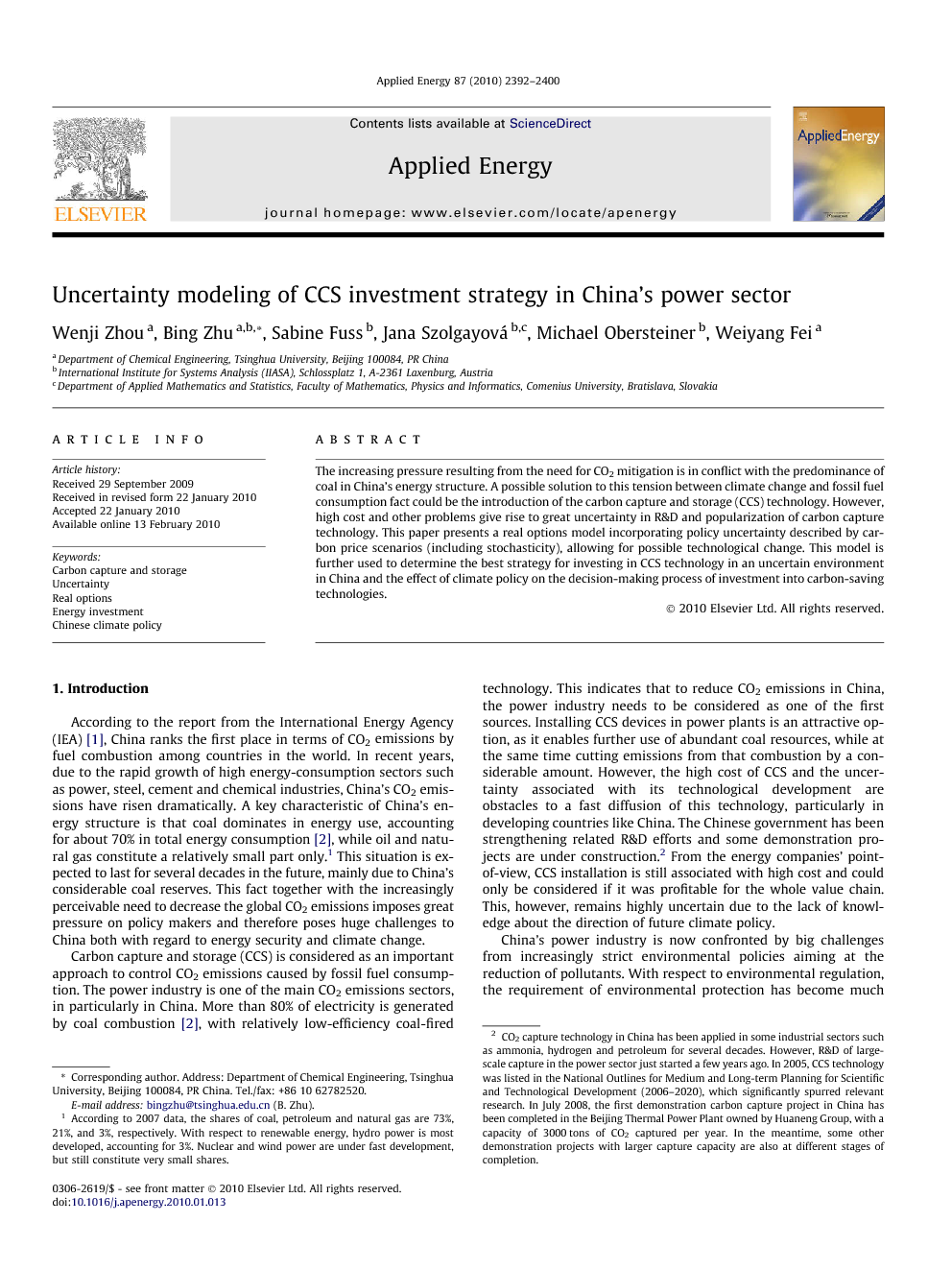 The increasing pressure resulting from the need for CO2 mitigation is in conflict with the predominance of coal in China’s energy structure. A possible solution to this tension between climate change and fossil fuel consumption fact could be the introduction of the carbon capture and storage (CCS) technology. However, high cost and other problems give rise to great uncertainty in R&D and popularization of carbon capture technology. This paper presents a real options model incorporating policy uncertainty described by carbon price scenarios (including stochasticity), allowing for possible technological change. This model is further used to determine the best strategy for investing in CCS technology in an uncertain environment in China and the effect of climate policy on the decision-making process of investment into carbon-saving technologies.

According to the report from the International Energy Agency (IEA) [1], China ranks the first place in terms of CO2 emissions by fuel combustion among countries in the world. In recent years, due to the rapid growth of high energy-consumption sectors such as power, steel, cement and chemical industries, China’s CO2 emissions have risen dramatically. A key characteristic of China’s energy structure is that coal dominates in energy use, accounting for about 70% in total energy consumption [2], while oil and natural gas constitute a relatively small part only.1 This situation is expected to last for several decades in the future, mainly due to China’s considerable coal reserves. This fact together with the increasingly perceivable need to decrease the global CO2 emissions imposes great pressure on policy makers and therefore poses huge challenges to China both with regard to energy security and climate change. Carbon capture and storage (CCS) is considered as an important approach to control CO2 emissions caused by fossil fuel consumption. The power industry is one of the main CO2 emissions sectors, in particularly in China. More than 80% of electricity is generated by coal combustion [2], with relatively low-efficiency coal-fired technology. This indicates that to reduce CO2 emissions in China, the power industry needs to be considered as one of the first sources. Installing CCS devices in power plants is an attractive option, as it enables further use of abundant coal resources, while at the same time cutting emissions from that combustion by a considerable amount. However, the high cost of CCS and the uncertainty associated with its technological development are obstacles to a fast diffusion of this technology, particularly in developing countries like China. The Chinese government has been strengthening related R&D efforts and some demonstration projects are under construction.2 From the energy companies’ point-of-view, CCS installation is still associated with high cost and could only be considered if it was profitable for the whole value chain. This, however, remains highly uncertain due to the lack of knowledge about the direction of future climate policy. China’s power industry is now confronted by big challenges from increasingly strict environmental policies aiming at the reduction of pollutants. With respect to environmental regulation, the requirement of environmental protection has become much stricter than before. For example, power plants are compelled to install desulfurization devices by regulation issued in recent years. However, there is currently not such a stringent requirement for China’s power industry to reduce greenhouse gas emissions. China is included in the clean development mechanism (CDM),3 however, and some energy enterprises have benefited from CDM projects. It is still hard to predict whether and when the situation will change and what kinds of policy instruments will be adopted in the post-Kyoto period. Moreover, in a cap-and-trade market, the CO2 price will fluctuate. In the face of such an uncertain environment, strategic decisions on investment into CO2 mitigation technology cannot be based on traditional discounted cash flow (DCF) analysis because companies possibly choose to delay the decision rather than immediately make a now-or-never decision by using DCF, as the investment is irreversible, involves high sunk costs and its payoff is uncertain. In order to capture these specific characteristics of the investment decision, real options analysis (ROA) has therefore been chosen for the analysis [3]. Generally, ROA is designed to take three important factors into account: the irreversibility of the investment, the uncertainty surrounding the future cash flows from the investment (here through volatile CO2 price processes), and the opportunity of timing the investment flexibly (here through adding the CCS module earlier or later in the planning period) [4]. Investment strategy in the power sector has been analyzed by using real options methods before, but only a few of them focus on climate change policies, and it is hard to find any discussion on this issue for developing countries like China. Laurikka [5] presents a simulation model implementing ROA to assess the impact of emissions trading scheme on integrated coal gasification combined cycle (IGCC). The study simulates three types of stochastic variables: the price of electricity, the price of fuel and the price of emission allowances. Yang et al. [6] value real options using a dynamic programming approach for technology investment choices under uncertain climate policy. Three cases for gas, coal and nuclear power investments are considered. Energy prices and the CO2 price are set to change randomly; for the latter one, a price jump was incorporated to represent policy-related shocks. All these studies are based on a specific emissions trading system, which cannot be applied directly to the case of China. Furthermore, the absence of technological improvement in those studies implies neglecting one of the most important drivers for low-carbon technology adoption. Kumbaroğlu et al. [7] integrate technological learning curves into a real options framework to appraise renewable energy technologies. Fuss and Szolgayová [8] use a real options model with stochastic technical change and stochastic fossil fuel prices, to investigate their impact on replacement investment decisions in the electricity sector. Unlike the studies above, this paper attempts to model and analyze climate policy uncertainty in China’s energy industry under consideration of technological change and establish a real options model to obtain CCS investment strategies from the point-of-view of a typical energy enterprise, hence providing policy implications for CO2 mitigation in the coming post-Kyoto period. The paper consists of six sections. Following this introduction, Section 2 presents the methodological framework of the real options model used in the study. In Section 3, the factors of policy uncertainty and technological progress are analyzed. Section 4 describes the features of three representative types of technologies considered. These are a pulverized coal power plant, a wind farm and an IGCC plant. The data used and the assumptions are explained in detail. The scenarios generated by varying underlying model parameters are analyzed in Section 5. Finally, the policy implications of the results from this real options model and its features as a policy analysis tool are presented in the conclusion.

Even though it is one of the major, potential CO2 mitigation measures, CCS needs to consume extra energy to reduce carbon emissions, which makes it less cost-effective than renewable energy alternatives and energy efficiency approaches. As a result, much debate has arisen on whether CCS should be further developed considering its high cost and energy inefficiency, which is especially important for developing countries like China. Water consumption in carbon capture operations may become another concern considering water shortage being a common problem in China. On the other hand, China still lacks integrated technologies for transportation, injection, monitoring and risk control, as well as robust knowledge about storage potentials. Large-scale leakage and geological disaster are also of concern in relation to CCS deployment in China, according to a survey [28]. These issues might become main barriers and hamper the large-scale deployment of CCS in China. Currently, most focus is put on energy efficiency improvements in China’s climate policy. In the national 11th five-year plan (from 2005 to 2010), energy-saving and pollutant-reducing actions are promoted and their implementation becomes a criterion for the assessment of government officials’ performance. The energy conservation law has also taken effect since August 2008. These policies give an incentive to enterprises to reduce energy consumption and thereby reduce CO2 emissions as well. However, these policies are not directly targeted at CO2 emissions and energy companies are not under any obligation to conduct such actions. Most of the projects aiming at CO2 mitigation in China are under the umbrella of CDM. The CDM projects in China involve renewable energy such as wind power, energy efficiency improvements of e.g. power plants. The trading price is actually very low with about 50–70 yuan per ton [29]. Whether developing countries with large emissions like China will be faced with commitments to CO2 reduction similar to Annex I countries some time in the future is still not clear given the current situation of international climate negotiation. The objective of this study has been to analyze investment strategies for CCS in China’s energy sector in an uncertain environment. To carry out the corresponding experiments, three kinds of technologies – a conventional pulverized coal power plant, an IGCC plant and a wind farm – have been selected as the representatives of the three approaches for CO2 mitigation (i.e. energy efficiency improvement, renewable energy, and carbon capture and storage) in China. Of these technologies, CCS modules can be added to the former two. To incorporate the uncertain factors into the decision process, a real options model has been developed, and scenarios to mimic various possible policy outcomes and rates of technical change have been analyzed and discussed. The key findings from the model and scenario analysis can be summarized as follows: (1)Flexibility in CCS investment decision making has an economic value, and it increases with an increase in CO2 price uncertainty. Some studies, as for example [30], present similar results. Moreover, this research illustrates that higher uncertainty with respect to the carbon market will increase the CCS option value, i.e., the economic value of the possibility to retrofit existing plants with CCS. (2)The responding time of companies to install CCS to climate policy is shorter when the policy is implemented in the beginning of the planning period. The result proves a conclusion from [18] by using a different approach. In particular, [18] (Energy Policy 2007, vol. 35, p. 5772) state that “the closer in time a company is to a change in policy, the greater the policy risk will be, and the greater the impact on investment decisions”. The real reason is that if the policy is enacted later, then the remaining planning horizon is shorter and then a higher price is needed to trigger the CCS investment. (3)The profitability of renewable energy will increase significantly in the long term. In a world more constrained by climate policy, the zero-CO2-emission advantage of renewable energy will improve the economics compared to fossil-fuel-consuming power plants. Technologies with zero fuel cost (e.g. wind, solar or hydro power) benefit even more because of zero fuel cost.13 For IGCC, the results show that its profit is not so competitive, except under more stringent climate policies. However, other advantages of IGCC, such as lower emission levels of other pollutants, have not been considered in this analysis. Therefore, a broader framework needs to be developed to assess this technology more comprehensively. (4)For China’s power industry, the expected profits of IGCC plants and conventional coal-fired power plants will not be very different when considering technical change. CCS should then be integrated in newly-built and more efficient power plants such as IGCC, which is due to their lower capture cost. Therefore, the three approaches to reduce carbon emissions in the electricity sector (CCS, energy efficiency and renewable energy) should always be considered in combination with respect to the overall strategy for CO2 mitigation. Furthermore, given the rather low cost of IGCC in Western countries, technology transfer could enable China’s power industry to implement CCS at a larger scale and more cost-effectively under a more stringent climate policy regime.