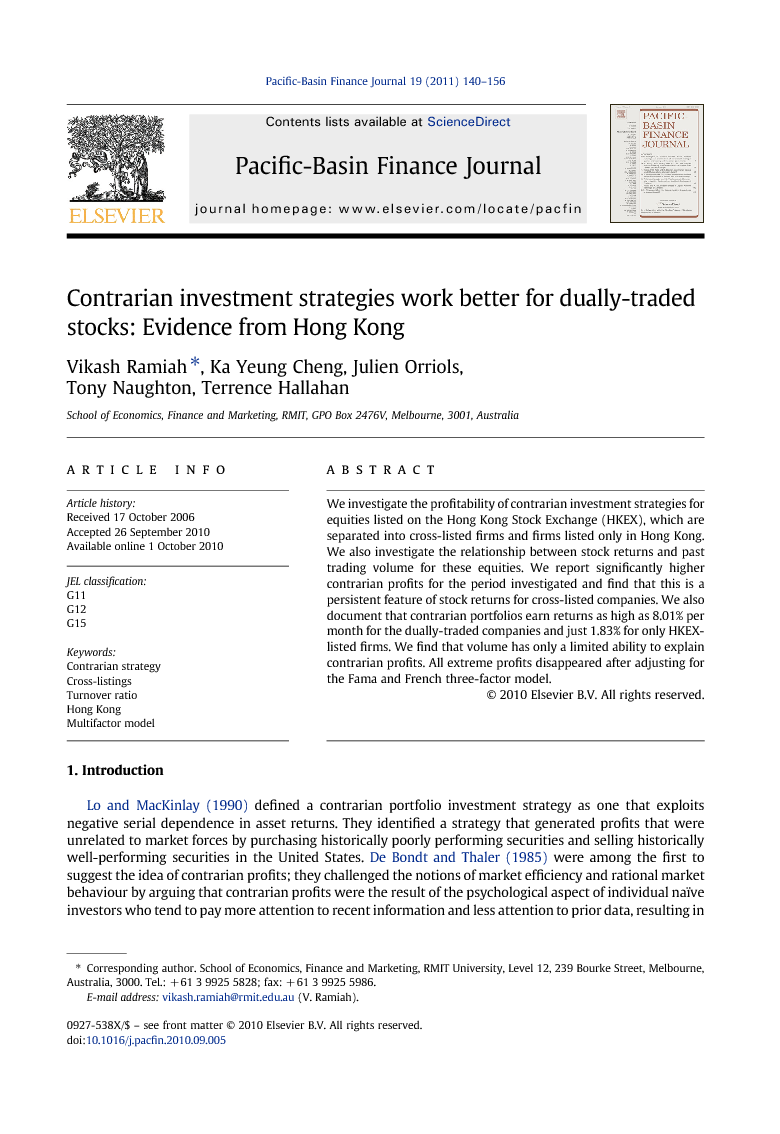 We investigate the profitability of contrarian investment strategies for equities listed on the Hong Kong Stock Exchange (HKEX), which are separated into cross-listed firms and firms listed only in Hong Kong. We also investigate the relationship between stock returns and past trading volume for these equities. We report significantly higher contrarian profits for the period investigated and find that this is a persistent feature of stock returns for cross-listed companies. We also document that contrarian portfolios earn returns as high as 8.01% per month for the dually-traded companies and just 1.83% for only HKEX-listed firms. We find that volume has only a limited ability to explain contrarian profits. All extreme profits disappeared after adjusting for the Fama and French three-factor model.

In this paper,weinvestigate various contrarian trading strategies for equities listed on theHongKongStock Exchange.We also consider the role of trading volume and test different formation and holding periods.We find evidence of substantial contrarian profits during the period from1992 to 2006. A zero-cost portfolio that goes long past losers and short past winners earns, on average, up to 8.01% per month. We also report that returns for dually-traded stocks were consistently higher than those for the Hong Kong only listed firms and can thus conclude that contrarian profits in Hong Kong aremainly driven by dually-traded stocks. Inconsistent with the literature, our results indicate that past trading volume does not play an explicit role in predicting future returns of stocks in shorter-term horizons. Moreover, our findings contradict the bulk of the literature aswe find that low trading volume has greater explanatory power than high volume does. An attempt is also made to explain the contrarian effect using the three-factormodel.While the three-factor model of Fama and French provides evidence in support of our strategies, all other profits disappear after adjusting for Fama– French risk factors.