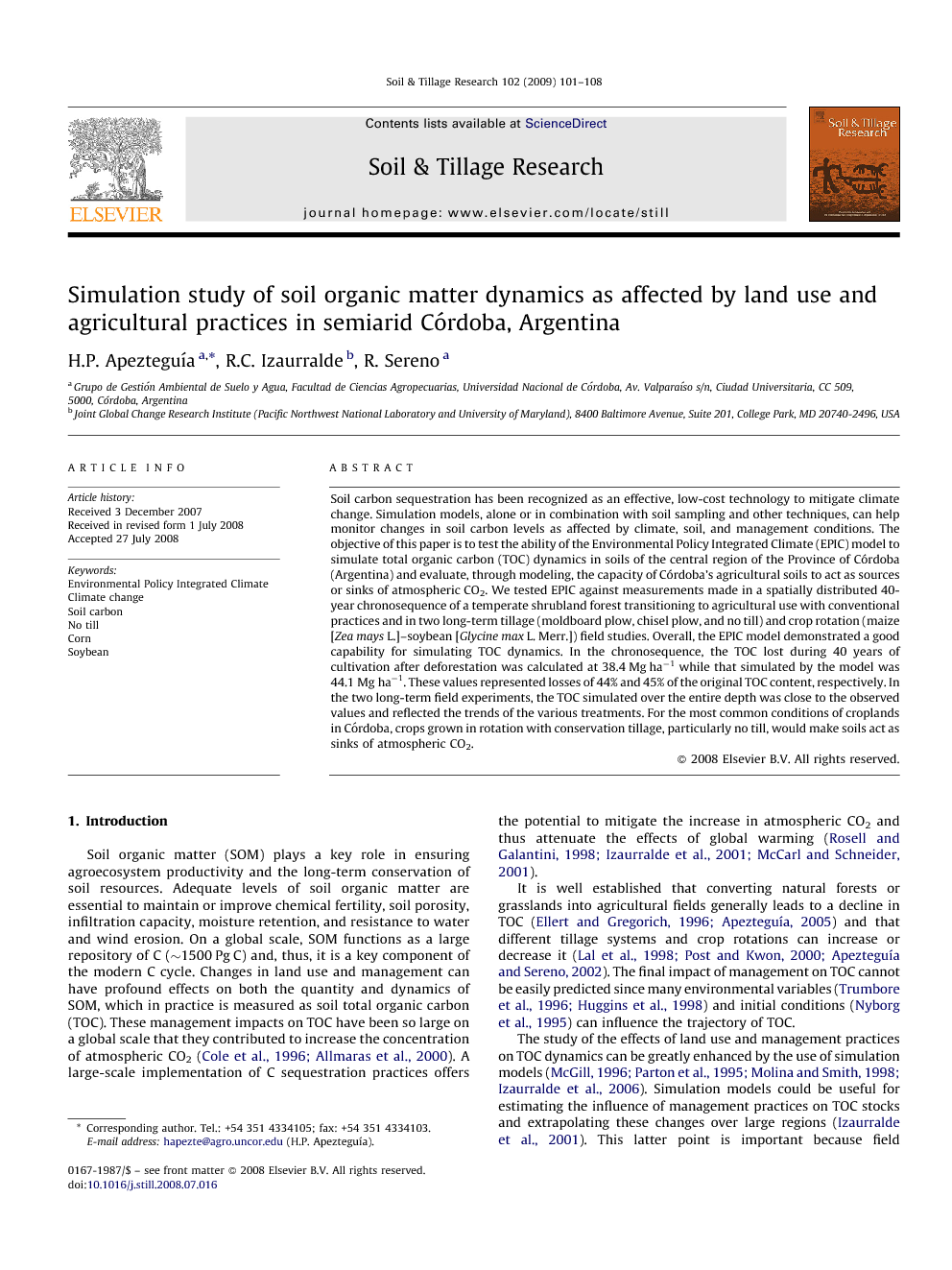 Soil carbon sequestration has been recognized as an effective, low-cost technology to mitigate climate change. Simulation models, alone or in combination with soil sampling and other techniques, can help monitor changes in soil carbon levels as affected by climate, soil, and management conditions. The objective of this paper is to test the ability of the Environmental Policy Integrated Climate (EPIC) model to simulate total organic carbon (TOC) dynamics in soils of the central region of the Province of Córdoba (Argentina) and evaluate, through modeling, the capacity of Córdoba's agricultural soils to act as sources or sinks of atmospheric CO2. We tested EPIC against measurements made in a spatially distributed 40-year chronosequence of a temperate shrubland forest transitioning to agricultural use with conventional practices and in two long-term tillage (moldboard plow, chisel plow, and no till) and crop rotation (maize [Zea mays L.]–soybean [Glycine max L. Merr.]) field studies. Overall, the EPIC model demonstrated a good capability for simulating TOC dynamics. In the chronosequence, the TOC lost during 40 years of cultivation after deforestation was calculated at 38.4 Mg ha−1 while that simulated by the model was 44.1 Mg ha−1. These values represented losses of 44% and 45% of the original TOC content, respectively. In the two long-term field experiments, the TOC simulated over the entire depth was close to the observed values and reflected the trends of the various treatments. For the most common conditions of croplands in Córdoba, crops grown in rotation with conservation tillage, particularly no till, would make soils act as sinks of atmospheric CO2.

Soil organic matter (SOM) plays a key role in ensuring agroecosystem productivity and the long-term conservation of soil resources. Adequate levels of soil organic matter are essential to maintain or improve chemical fertility, soil porosity, infiltration capacity, moisture retention, and resistance to water and wind erosion. On a global scale, SOM functions as a large repository of C (∼1500 Pg C) and, thus, it is a key component of the modern C cycle. Changes in land use and management can have profound effects on both the quantity and dynamics of SOM, which in practice is measured as soil total organic carbon (TOC). These management impacts on TOC have been so large on a global scale that they contributed to increase the concentration of atmospheric CO2 (Cole et al., 1996 and Allmaras et al., 2000). A large-scale implementation of C sequestration practices offers the potential to mitigate the increase in atmospheric CO2 and thus attenuate the effects of global warming (Rosell and Galantini, 1998, Izaurralde et al., 2001 and McCarl and Schneider, 2001). It is well established that converting natural forests or grasslands into agricultural fields generally leads to a decline in TOC (Ellert and Gregorich, 1996 and Apezteguía, 2005) and that different tillage systems and crop rotations can increase or decrease it (Lal et al., 1998, Post and Kwon, 2000 and Apezteguía and Sereno, 2002). The final impact of management on TOC cannot be easily predicted since many environmental variables (Trumbore et al., 1996 and Huggins et al., 1998) and initial conditions (Nyborg et al., 1995) can influence the trajectory of TOC. The study of the effects of land use and management practices on TOC dynamics can be greatly enhanced by the use of simulation models (McGill, 1996, Parton et al., 1995, Molina and Smith, 1998 and Izaurralde et al., 2006). Simulation models could be useful for estimating the influence of management practices on TOC stocks and extrapolating these changes over large regions (Izaurralde et al., 2001). This latter point is important because field measurements of soil TOC changes are relatively expensive to make and time consuming. The Environmental Policy Integrated Climate (EPIC) model was originally designed to quantify the effects of erosion on soil productivity (Williams et al., 1984 and Williams, 1990). Numerous improvements and tests conducted since its first version released in 1984 have transformed it into a model capable of describing many agroecosystem processes including crop growth, water and nutrient balances, erosion, CO2 fertilization effects, and pesticide fate (Williams, 1995). In one of these improvements, concepts and equations from the Century model (Parton and Rassmussen, 1994 and Vitousek et al., 1994) were used to build a sub model describing C and N transformations and flows in as many as 15 soil layers (Izaurralde et al., 2006). The SOM sub model in EPIC includes an algorithm to calculate changes in soil bulk density (Db) as affected by changes in SOM content. While the goodness-of-fit of EPIC has been tested at several sites in North America (Causarano et al., 2007; He et al., 2006, Izaurralde et al., 2006 and Izaurralde et al., 2007), it has never been tested against field data in South America. Thus, the objectives of this paper are to (a) test the performance of the EPIC model in simulating plant productivity and TOC dynamics of Haplustolls of the central region of the Province of Córdoba (Argentina) and (b) evaluate, through modeling, the capacity of these soils to act as source or sink of atmospheric CO2.

(a) The EPIC model adequately described plant productivity and soil C dynamics of land use change and crop systems experiments of the Haplustolls of the central region of the province of Córdoba, Argentina. (b) As tested here, the EPIC model provided clear evidence of whether Haplustolls of central Córdoba behave as sources or sinks of atmospheric CO2. The model was able to mimic the observed effect of land use change from forest to agriculture in releasing CO2 from soil to the atmosphere. Conversely, the EPIC model also captured the observed effect of soil C sequestration under conservation tillage (particularly NT) and crop rotation practices. The results of this study give confidence for using EPIC to simulate TOC dynamics and soil C sequestration at the regional scale in other temperate regions of Argentina and South America