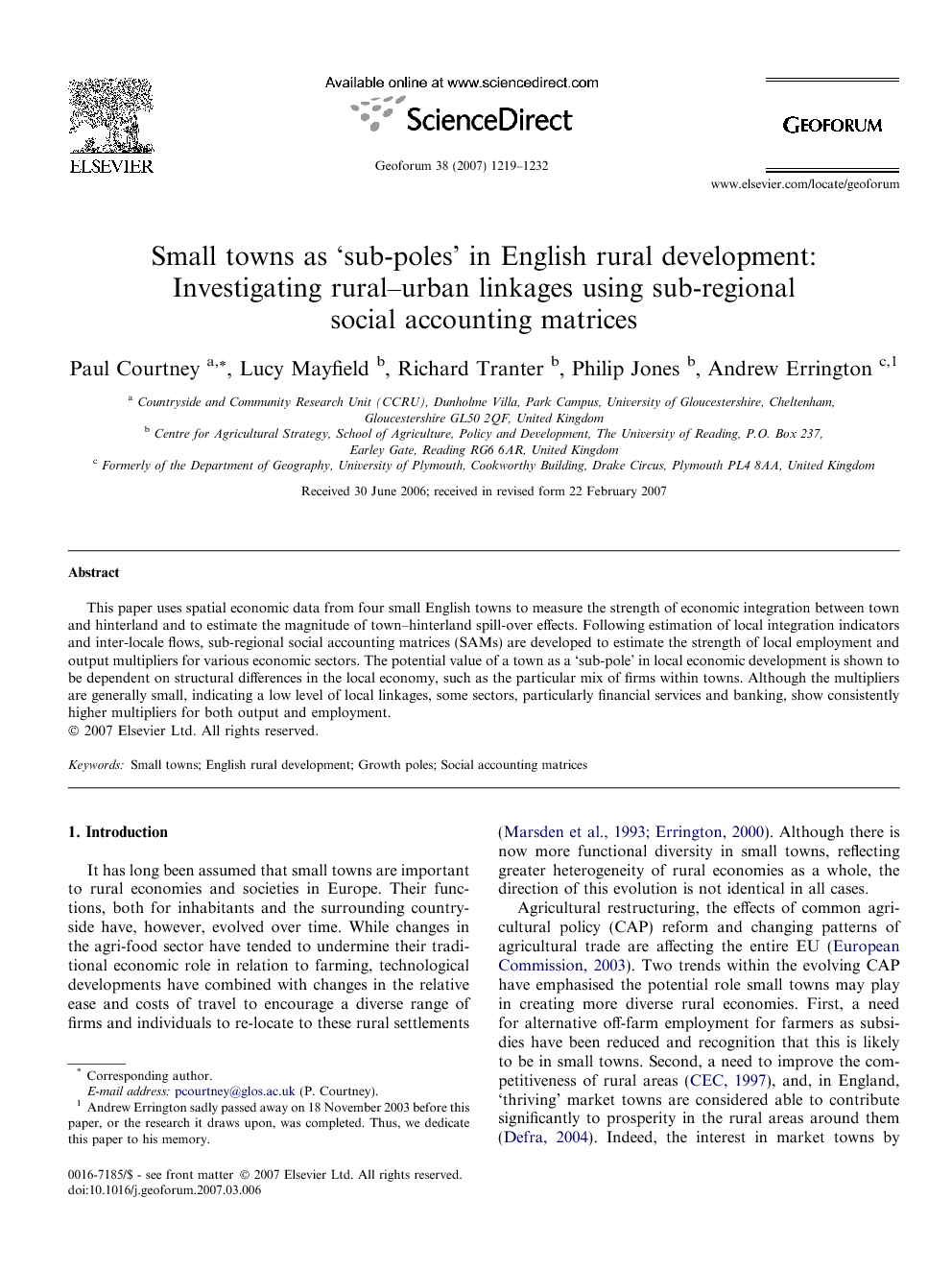 This paper uses spatial economic data from four small English towns to measure the strength of economic integration between town and hinterland and to estimate the magnitude of town–hinterland spill-over effects. Following estimation of local integration indicators and inter-locale flows, sub-regional social accounting matrices (SAMs) are developed to estimate the strength of local employment and output multipliers for various economic sectors. The potential value of a town as a ‘sub-pole’ in local economic development is shown to be dependent on structural differences in the local economy, such as the particular mix of firms within towns. Although the multipliers are generally small, indicating a low level of local linkages, some sectors, particularly financial services and banking, show consistently higher multipliers for both output and employment.

With respect to the flows of goods and services between town and hinterland, and the spill-overs that they generate, small and medium-sized towns do not appear to act as ‘sub-poles’ within English rural economies. These towns do, however, provide an important employment function to local residents, although our findings indicate that jobs for local residents tend to be relatively poorly paid compared to those for in-commuters and those commuting out to larger centres. More positively, there are certain sectors that exhibit strong levels of local economic integration, which has potentially important implications for policies aimed at fostering self-containment and local economic growth. In particular, Banking and financial services, chemicals, plastics, rubber and glass and machinery and computing. This is interesting given the potential of this type of industry to provide quality well-paid employment. With its relatively large multipliers, agriculture does appear to retain links with small and medium-sized towns and much of its impact continues to be felt in the town itself. Thus, agricultural policy may still have an important impact on rural communities. This paper has concentrated on the spatial orientation and structural effects of production linkages, and we can identify two main areas that would benefit from further research. First, given the potential, and limitations, of the employment function of small towns, understanding the dynamics of these local labour markets may, in turn, help secure their role in rural economies, and help improve their competitiveness in the wider arena. Second, the paper has not considered any cultural effects associated with the observed patterns of economic activity. For example, the personal characteristics of local business people and residents, and their desire to buy and sell locally – either to support the local economy or to exploit or reinforce social networks (see, for example, Granovetter, 1985; Henry and Pinch, 2000; Murdoch, 2000) – require further exploration in this context. While we have examined the economic linkages in, and around, case study towns, and have thus contributed to the debate on the way these towns are currently functioning with regard to their hinterlands, there would be further benefits from research into the factors which influence both the nature and strength of economic linkages, and the future development of small towns.