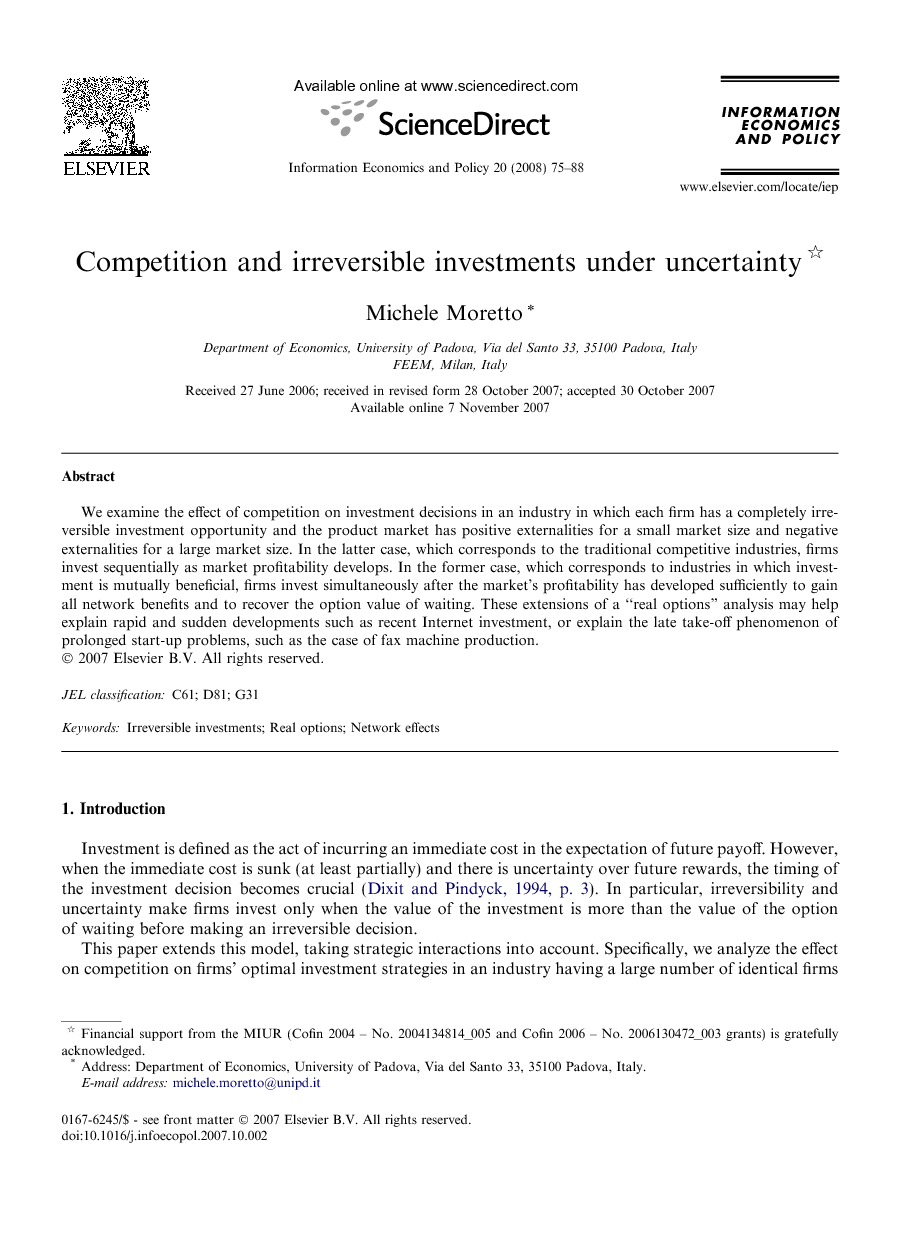 We examine the effect of competition on investment decisions in an industry in which each firm has a completely irreversible investment opportunity and the product market has positive externalities for a small market size and negative externalities for a large market size. In the latter case, which corresponds to the traditional competitive industries, firms invest sequentially as market profitability develops. In the former case, which corresponds to industries in which investment is mutually beneficial, firms invest simultaneously after the market’s profitability has developed sufficiently to gain all network benefits and to recover the option value of waiting. These extensions of a “real options” analysis may help explain rapid and sudden developments such as recent Internet investment, or explain the late take-off phenomenon of prolonged start-up problems, such as the case of fax machine production.

Investment is defined as the act of incurring an immediate cost in the expectation of future payoff. However, when the immediate cost is sunk (at least partially) and there is uncertainty over future rewards, the timing of the investment decision becomes crucial (Dixit and Pindyck, 1994, p. 3). In particular, irreversibility and uncertainty make firms invest only when the value of the investment is more than the value of the option of waiting before making an irreversible decision. This paper extends this model, taking strategic interactions into account. Specifically, we analyze the effect on competition on firms’ optimal investment strategies in an industry having a large number of identical firms engaged in an investment game to enter a new product market. We consider a sector where each firm has only one completely irreversible investment opportunity and the market has an inverted U-shape relation between profits and industry size. That is, positive externalities tend to dominate for low initial market size, while negative externalities dominate at higher market levels. Although we do not refer to a particular product, there are many markets that have greater profitability when more than one firm has already invested. In the case of goods with “network externalities”, consumer’s advantage increases as the total number of consumers purchasing the same or compatible brands increases. An example is the decision by rival firms to set up an interconnected network to satisfy an interdependent demand for telecommunication services by many potential customers (Rohlfs, 2001, p. 34).1 Another relevant case involves a high degree of complementarity between different goods e.g. for software and hardware (Katz and Shapiro, 1985). Generally, software packages are produced by many firms so that they can be used by the same hardware. Thus, the greater the variety of software supporting a certain hardware, the greater the value of this hardware and the greater the advantage consumers directly gain from the variety of software supporting that hardware. Some authors refer to this as “indirect network externalities” (Shy, 2001, p. 52 ) or “complementary bandwagon effects” (Rohlfs, 2001, pp. 47–48).2 In other cases, the utility of each consumer decreases as more consumers buy the good. This occurs because of congestion, as the communication and information-based industries are recently experiencing. Even though the introduction of a new Web site increases the value of the Internet to every existing user, the progressive increase of its use increases congestion measured in term of excessive delay of transmission (longer connection time spent to load a Web page) or loss of service altogether (Odlyzko, 1999). Congestion then reduces consumers’ utility of joining the Internet and passes this disadvantage to the firms by reducing the demand of access.3 The negative externalities case corresponds to the traditional competitive industry in which the investment of one firm lowers the profitability of the others. In this case the introduction of competition has two opposing effects which offset each other. Firstly, competition reduces the expected profit flow that derives from the investment, which tends to delay investment. Secondly, competition introduces a strategic benefit in favour of the investment as it deters the investments by rivals. Leahy (1993) first discovered this property, showing that the optimal investment strategy of a competitive firm is equal to that of a single firm in isolation. In this case, firms enter sequentially as market profitability increases. On the contrary, when investments are mutually beneficial, the optimal investment policy is essentially a question of coordination. As the timing of a firm’s entry is influenced by the entry decisions of others, Leahy’s result cannot be applied. Two equilibria can emerge: either the industry remains locked-in with no entry as long as very pessimistic expectations dominate the market, or a mass of firms simultaneously runs to enter, driven by the expected rents generated by the positive externalities.4 Excluding the former, we show that this “network run” is triggered when the profitability of the market has developed sufficiently to allow the firms to capture all bandwagon benefits and to recover the option value of waiting due to the irreversibility. This also determines endogenously the optimal start-up size of the industry. Therefore, our model is an extension of the dynamic equilibrium in a competitive industry presented by Leahy, 1993 and Dixit and Pindyck, 1994.5 Furthermore, Nielsen (2002), focusing on a duopoly model with positive externalities, predicts a similar result to ours, namely that firms invest simultaneously at the market profitability given by the duopoly solution.6 More generally, this result holds in a free entry framework. The paper is organized as follows. Section 2 states the basic assumptions behind the model. Section 3 gives the main results of the paper, namely the optimal entry strategy in the presence of positive and negative externalities. Section 4 places the paper within the context of the literature on irreversible investment and market structure. Section 5 concludes and the Appendix contains the proofs omitted in the text.

We have offered a preliminary investigation into the effect of competition on firms’ irreversible investment decisions under uncertainty as a generalization of the “real options” approach. We considered a product market that allows simultaneous treatment of positive externalities for a small market size and negative externalities for a large market size. The latter corresponds to a traditional competitive industries where the investment of one firm lowers the profitability of others. In that case, firms invest sequentially as market profitability develops. The former case corresponds to industries in which investment is mutually beneficial, i.e. the investment of one firm increases the profitability of other firms’ investments. In this case we find that firms invest simultaneously after the profitability of the market has developed sufficiently. The profit level that triggers an initial investment under negative externalities endogenously determines the optimal start-up size of the industry. Our theoretical results may help to explain both the rapid and sudden development that has occurred for certain network goods such as the telecommunication services (Williams et al., 1988, Rogers, 1995, Schoder, 2000 and Lim et al., 2003), as well as for the recent boom of Internet investment, for example the setting up of dotcoms on the World Wide Web for e-commerce (Odlyzko, 1999), and the many prolonged start-up problems while awaiting market development as in the case of digital fax machines (Rohlfs, 1974, Rohlfs, 2001 and Economides and Himmelberg, 1995).22 Furthermore, our results complement the recent new line of research on adoption and diffusion of new technology. This line of research incorporates the idea that any single decision by a potential user is not between adopting or not adopting, but is a choice between adopting now or deferring the decision later. From this point of view, the adoption of a new technology is similar to any other investment decision under uncertainty about future benefits and irreversibility, which generates an option value of waiting (Stoneman, 2001, Luque, 2002 and Hall and Khan, 2003). Then the adopter’s decision process can be modelled as suggested by Dixit and Pindyck (1994), and used here, providing another reason why diffusion of new technology may be rather slow (Hall and Khan, 2003, p. 3). Some extensions can easily be incorporated, such as the inclusion of finitely-lived capital projects, stage investments, growth options, and operative options that lead to suspension or definitive abandonment of the investment. The model also permits study of the efficiency of the investment-entry pattern. Is the equilibrium investment-entry time efficient? Does the efficient entry pattern occur in equilibrium? Such a study can be conducted considering the cooperative solution where by the investment decisions are determined by maximizing the sum of the firms’ value functions or introducing a true social value function. Finally, a more substantial modification concerns a comparison with the case in which there is a monopolist who possesses all investment opportunities. Although the start-up problem in that case is much simpler, the analysis of the start-up conditions and the optimal network size is particularly interesting. Specifically, where network externalities are present, it may be profitable for the monopolist to sacrifice profits in the short-run in the hope of raising prices in the future after demand has grown and consumers are enjoying network effects.