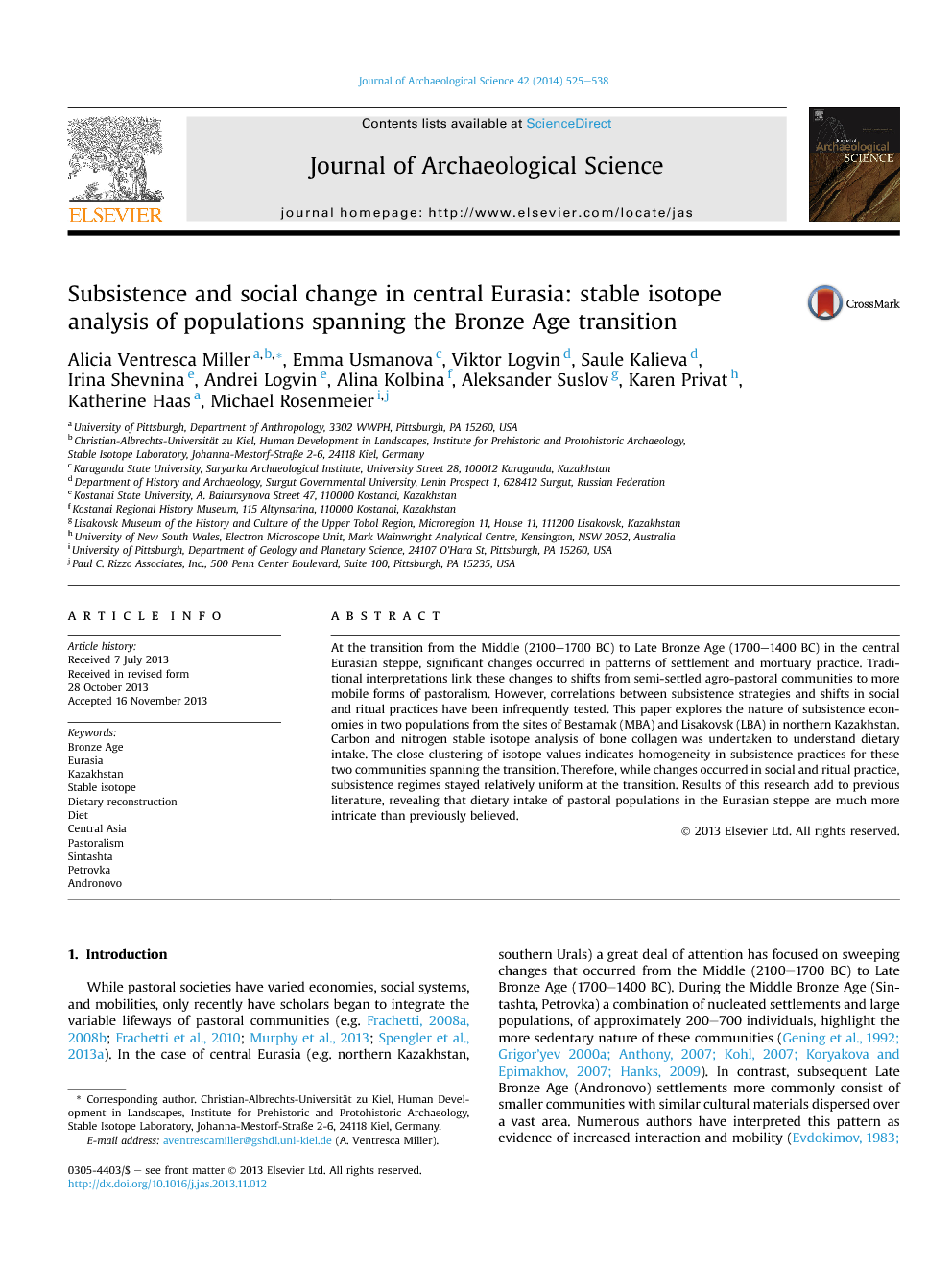 At the transition from the Middle (2100–1700 BC) to Late Bronze Age (1700–1400 BC) in the central Eurasian steppe, significant changes occurred in patterns of settlement and mortuary practice. Traditional interpretations link these changes to shifts from semi-settled agro-pastoral communities to more mobile forms of pastoralism. However, correlations between subsistence strategies and shifts in social and ritual practices have been infrequently tested. This paper explores the nature of subsistence economies in two populations from the sites of Bestamak (MBA) and Lisakovsk (LBA) in northern Kazakhstan. Carbon and nitrogen stable isotope analysis of bone collagen was undertaken to understand dietary intake. The close clustering of isotope values indicates homogeneity in subsistence practices for these two communities spanning the transition. Therefore, while changes occurred in social and ritual practice, subsistence regimes stayed relatively uniform at the transition. Results of this research add to previous literature, revealing that dietary intake of pastoral populations in the Eurasian steppe are much more intricate than previously believed.

While pastoral societies have varied economies, social systems, and mobilities, only recently have scholars began to integrate the variable lifeways of pastoral communities (e.g. Frachetti, 2008a and Frachetii, 2008b; Frachetti et al., 2010; Murphy et al., 2013; Spengler et al., 2013a). In the case of central Eurasia (e.g. northern Kazakhstan, southern Urals) a great deal of attention has focused on sweeping changes that occurred from the Middle (2100–1700 BC) to Late Bronze Age (1700–1400 BC). During the Middle Bronze Age (Sintashta, Petrovka) a combination of nucleated settlements and large populations, of approximately 200–700 individuals, highlight the more sedentary nature of these communities (Gening et al., 1992, Grigor'yev, 2000, Anthony, 2007, Kohl, 2007, Koryakova and Epimakhov, 2007 and Hanks, 2009). In contrast, subsequent Late Bronze Age (Andronovo) settlements more commonly consist of smaller communities with similar cultural materials dispersed over a vast area. Numerous authors have interpreted this pattern as evidence of increased interaction and mobility (Evdokimov, 1983, Potemkina, 1983, Habdulina and Zdanovich, 1984, Kuz'mina, 2007 and Koryakova and Epimakhov, 2007). Explaining the shift from aggregated to dispersed communities is challenging because the subsistence economies of local communities remain undetermined. This has resulted in models that equate aggregated communities with agro-pastoralism, and the dispersal of these groups as a move towards nomadic pastoralism.

The validity of isotopic data as a dietary measure is based on the assumption that contamination of the collagen has not occurred post-mortem. For collagen, C:N ratios are the most commonly used measure of diagenesis and its potential impact on δ13C and δ15N values. Bone collagen with a C:N ratio that falls outside the range of 2.9–3.7 is considered to have been affected by post-mortem alteration (DeNiro, 1985; Schoeninger et al., 1989; Ambrose and Norr, 1993). For this research, 49 of 51 human bone samples (96%) and 6 of 6 animal bone samples (100%) had atomic C:N ratios between 3.0 and 3.6 (Tables 1 and 2). These ratios fall within the range of 2.9–3.7, indicating that collagen was not contaminated or degraded (DeNiro, 1985, Schoeninger et al., 1989 and Ambrose and Norr, 1993). The two samples that fell outside of the acceptable range for C:N ratios (3.70 and 3.76 respectively) were not used in this study. Tables 1 and 2 present the results of stable isotope analysis for each cemetery with unacceptable ratios shaded (samples 3503 and 3176).