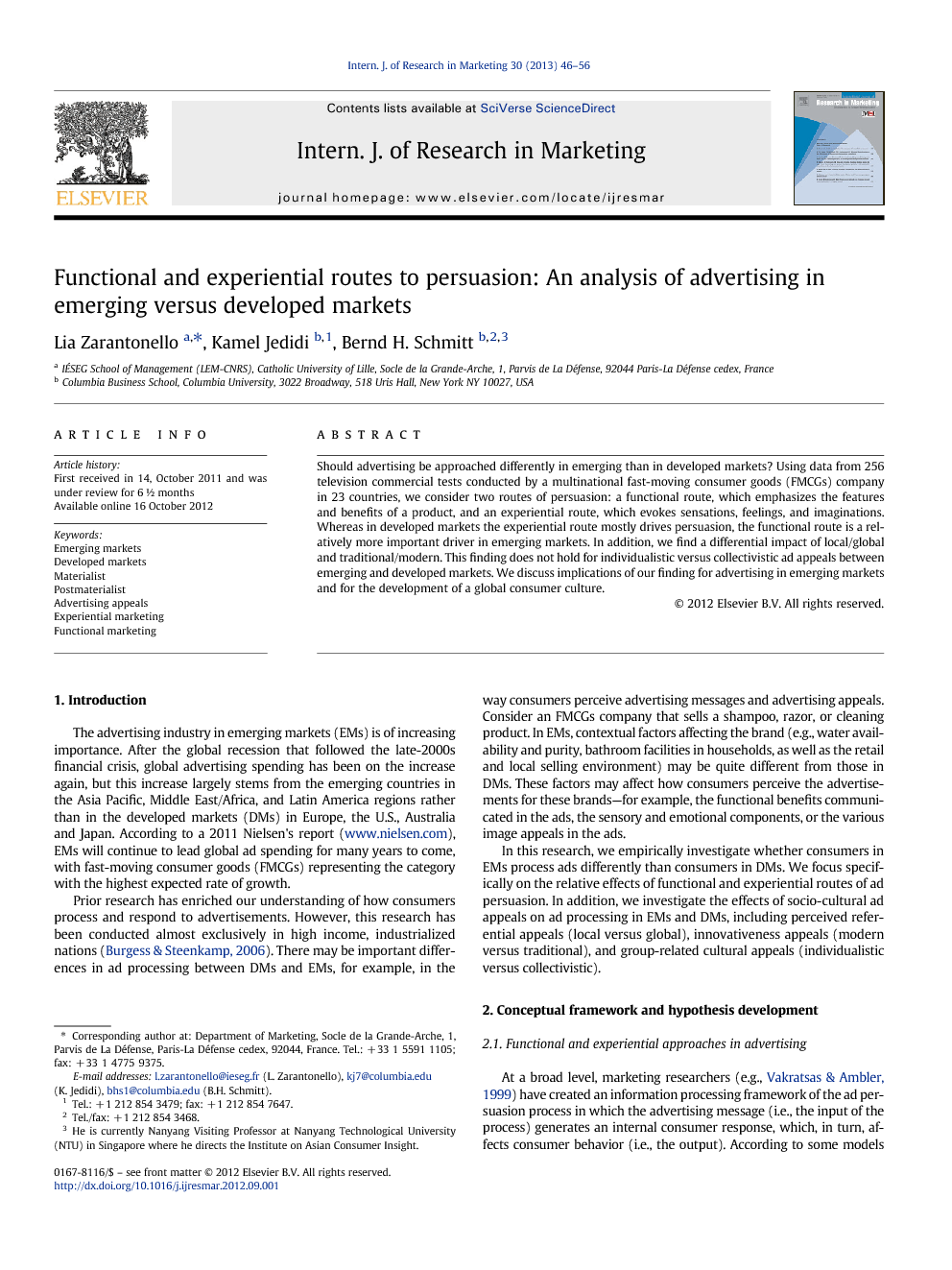 Should advertising be approached differently in emerging than in developed markets? Using data from 256 television commercial tests conducted by a multinational fast-moving consumer goods (FMCGs) company in 23 countries, we consider two routes of persuasion: a functional route, which emphasizes the features and benefits of a product, and an experiential route, which evokes sensations, feelings, and imaginations. Whereas in developed markets the experiential route mostly drives persuasion, the functional route is a relatively more important driver in emerging markets. In addition, we find a differential impact of local/global and traditional/modern. This finding does not hold for individualistic versus collectivistic ad appeals between emerging and developed markets. We discuss implications of our finding for advertising in emerging markets and for the development of a global consumer culture.

1. Introduction The advertising industry in emerging markets (EMs) is of increasing importance. After the global recession that followed the late-2000s financial crisis, global advertising spending has been on the increase again, but this increase largely stems from the emerging countries in the Asia Pacific, Middle East/Africa, and Latin America regions rather than in the developed markets (DMs) in Europe, the U.S., Australia and Japan. According to a 2011 Nielsen's report (www.nielsen.com), EMs will continue to lead global ad spending for many years to come, with fast-moving consumer goods (FMCGs) representing the category with the highest expected rate of growth. Prior research has enriched our understanding of how consumers process and respond to advertisements. However, this research has been conducted almost exclusively in high income, industrialized nations (Burgess & Steenkamp, 2006). There may be important differences in ad processing between DMs and EMs, for example, in the way consumers perceive advertising messages and advertising appeals. Consider an FMCGs company that sells a shampoo, razor, or cleaning product. In EMs, contextual factors affecting the brand (e.g., water availability and purity, bathroom facilities in households, as well as the retail and local selling environment) may be quite different from those in DMs. These factors may affect how consumers perceive the advertisements for these brands—for example, the functional benefits communicated in the ads, the sensory and emotional components, or the various image appeals in the ads. In this research, we empirically investigate whether consumers in EMs process ads differently than consumers in DMs. We focus specifically on the relative effects of functional and experiential routes of ad persuasion. In addition, we investigate the effects of socio-cultural ad appeals on ad processing in EMs and DMs, including perceived referential appeals (local versus global), innovativeness appeals (modern versus traditional), and group-related cultural appeals (individualistic versus collectivistic).

Using an extensive data set from an FMCGs company of 256 television commercials for cleaning brands from 23 countries around the world, we find important ad processing differences between EMs and DMs. In DMs, experiential advertising significantly impacts affect and does not impact cognition. Functional advertising also impacts affect, albeit to a lesser degree. In contrast, in EMs, functional advertising significantly impacts cognition and affect. Both cognition and affect are significant drivers of purchase intent. However, in EMs, experiential advertising has no significant impact on cognition or affect. Thus, in DMs, the experiential route is a more important driver of persuasion; however, the functional route is the key driver of persuasion in EMs. Importantly, these effects are significantly different across DM and EM countries. This supports our overall hypothesis: in DMs, the experiential route best describes the advertising process of persuasion, whereas in EMs, it is the functional route that best describes ad persuasion. Our results also show that, unexpectedly, the functional route influences affect in EMs and, to a lesser degree, in DMs. This result means that functional aspects of the ads, such as product attributes and applications, lead consumers to enjoy the ad and to perceive the brand as attractive. This effect may occur because many products, by their very nature (especially the cleaning products featured herein), offer functionality that creates value, and from this value creation, consumers derive positive affect (Chandy, Tellis, MacInnis, & Thaivanich, 2001). Our second overall hypothesis, which states that global, modern, and individualistic ad appeals are more likely to stimulate affect in DMs, whereas in EMs, such appeals are more likely to stimulate cognition, received only partial support. The effects of local/global and modern/traditional ad appeals are largely supported, whereas we find no effects for individualistic versus collectivistic appeals on the persuasion process. As predicted, the global appeal impacts affect in DMs and impacts cognition in EMs; global appeal also has cognitive effects. This impact, however, is not significantly different across the two country groups. With regards to traditional/modern appeals, as predicted, the modern appeal impacts affect in DMs and impacts cognition in EMs. Importantly, this impact is significantly different across the two country groups.