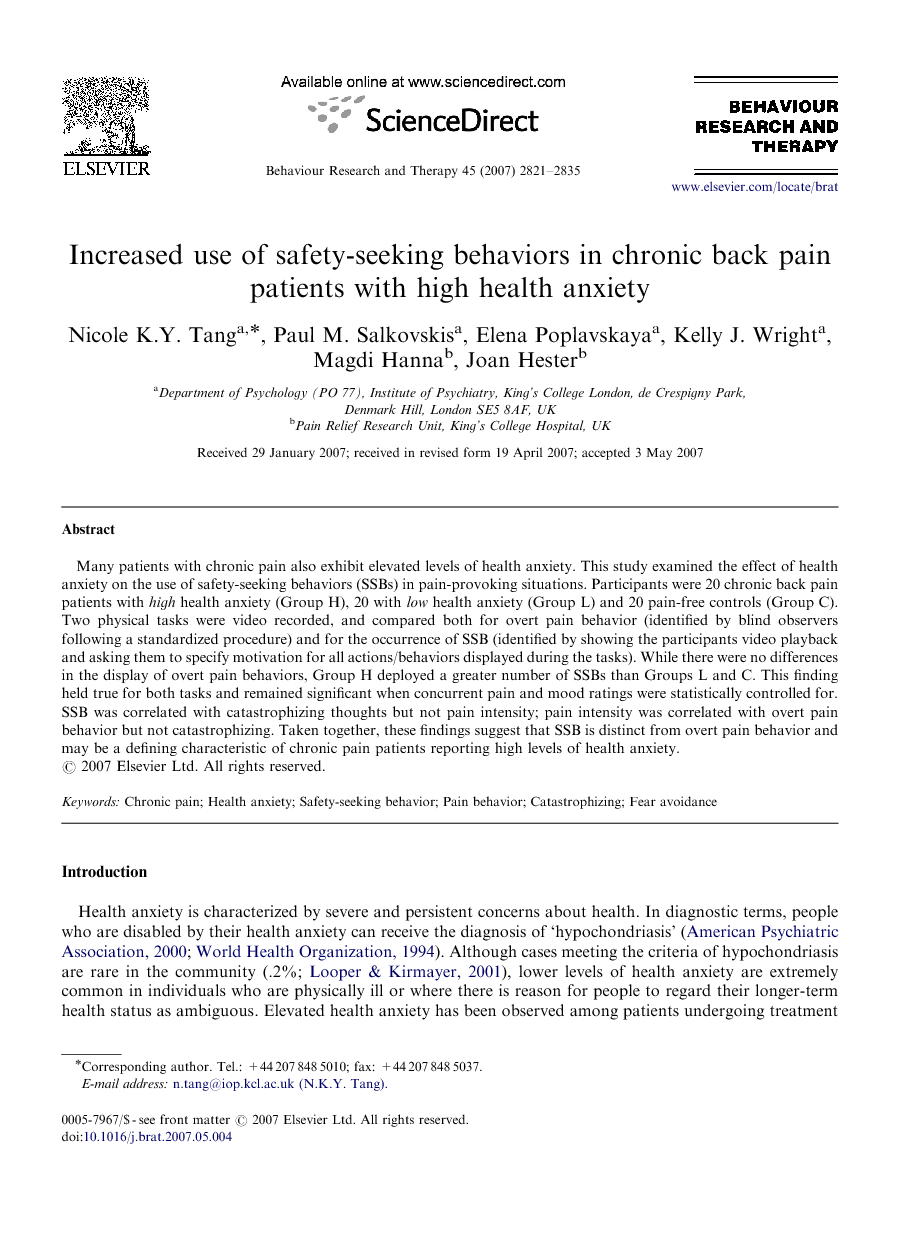 Many patients with chronic pain also exhibit elevated levels of health anxiety. This study examined the effect of health anxiety on the use of safety-seeking behaviors (SSBs) in pain-provoking situations. Participants were 20 chronic back pain patients with high health anxiety (Group H), 20 with low health anxiety (Group L) and 20 pain-free controls (Group C). Two physical tasks were video recorded, and compared both for overt pain behavior (identified by blind observers following a standardized procedure) and for the occurrence of SSB (identified by showing the participants video playback and asking them to specify motivation for all actions/behaviors displayed during the tasks). While there were no differences in the display of overt pain behaviors, Group H deployed a greater number of SSBs than Groups L and C. This finding held true for both tasks and remained significant when concurrent pain and mood ratings were statistically controlled for. SSB was correlated with catastrophizing thoughts but not pain intensity; pain intensity was correlated with overt pain behavior but not catastrophizing. Taken together, these findings suggest that SSB is distinct from overt pain behavior and may be a defining characteristic of chronic pain patients reporting high levels of health anxiety.

Health anxiety is characterized by severe and persistent concerns about health. In diagnostic terms, people who are disabled by their health anxiety can receive the diagnosis of ‘hypochondriasis’ (American Psychiatric Association, 2000; World Health Organization, 1994). Although cases meeting the criteria of hypochondriasis are rare in the community (.2%; Looper & Kirmayer, 2001), lower levels of health anxiety are extremely common in individuals who are physically ill or where there is reason for people to regard their longer-term health status as ambiguous. Elevated health anxiety has been observed among patients undergoing treatment for chronic pain (Hadjistavropoulos, Owens, Hadjistavropoulos, & Asmundson, 2001). In a recent study, Rode, Salkovskis, Dowd, and Hanna (2006) examined the occurrence of severe and persistent health anxiety in patients consecutively recruited from a specialist pain clinic. On the basis of responses to the Short Health Anxiety Inventory (SHAI; Salkovskis, Rimes, Warwick, & Clark, 2002), these authors conservatively estimated the prevalence of hypochondriasis (i.e., SHAI⩾18) to be at least 37% and of severe health anxiety (i.e., SHAI⩾15) to be at least 51% among patients with chronic pain. These figures were much higher than the rates observed in both controls with pain (hypochondriasis: 3%; severe health anxiety: 18%) and controls without pain (hypochondriasis: 1%; severe health anxiety: 10%), consistent with the possible role of health anxiety as a causal and/or maintaining factor in chronic pain. The value of linking chronic pain to health anxiety lies in the possibility of applying theoretical and empirical work across these currently distinct areas. The cognitive theory of health anxiety (Salkovskis & Bass, 1997; Salkovskis & Warwick, 1986; Warwick & Salkovskis, 1990) suggests that people with persistent and severe health anxiety have a relatively enduring tendency to misinterpret bodily symptoms and health-relevant information as evidence that they are suffering from (or are at high risk of developing) a serious physical illness. Such negative/catastrophic interpretation of health-relevant information is characteristic of people experiencing high levels of health anxiety, and results in a range of reactions, which can serve to maintain and increase their negative beliefs. These reactions can manifest in multiple domains including the cognitive (e.g., selective and enhanced attention to illness-related information, negative appraisal of symptoms), affective (e.g., anxiety, depression, anger), physiological (e.g., increased bodily arousal, sleep disturbance) and behavioral (e.g., increased checking/reassurance seeking) systems. Though not intended, such reactions increase the sufferer's preoccupation with health and may worsen hypochondriacal symptoms in the longer term (Clark, 1999; Salkovskis, 1996b; Salkovskis, Clark, & Gelder, 1996). It has been proposed that the cognitive–behavioral model of health anxiety can be applied to chronic pain patients in whom health anxiety is a major feature of clinical presentation (Hadjistavropoulos et al., 2001; Rode et al., 2006). The enduring tendency of health anxious patients to misinterpret pain sensations either as an indication of an underlying disease process (e.g., cancer) or as a sign that they may be vulnerable to or have already sustained serious physical damage (e.g., a crumbling spinal column) is likely to intensify the pain experience through similar cognitive, affective, physiological and behavioral mechanisms found in hypochondriasis. If this is so, then it should be possible to adapt the treatment strategies which have proven so effective in the treatment of health anxiety (Salkovskis, Warwick, & Deale, 2003) for use in people suffering from chronic pain syndromes and co-existing health anxiety. Such an approach is consistent with the recognition of chronic pain as a heterogeneous disorder, and the suggestion that matching treatment to patients’ psychological characteristics may improve the efficacy of cognitive behavior therapies for chronic pain (Vlaeyen & Morley, 2005). In a well-designed series of experimental studies, Hadistavropoulos and her colleagues (see Hadjistavropoulos & Hadjistavropoulos, 2003 for a review) have been able to demonstrate that, compared to non-health anxious individuals, health anxious pain patients are more likely to show selective attention to bodily sensations, detect heightened physical symptoms, report more intense pain, exhibit lower pain tolerance, report greater anxiety, engage in catastrophizing thinking and seek medical reassurance. These findings not only illustrate the interaction between health anxiety and pain but also demonstrate the clinical benefits of psychological subtyping according to patients’ levels of health anxiety. However, full application of the health anxiety model to the study of chronic pain relies on research validating the specific mechanisms hypothesized to be involved in maintaining the syndrome. One major prediction of the model that awaits empirical evaluation is the use of “safety-seeking behavior (SSB)” among chronic pain patients with high health anxiety. The concept of “SSB” has its origin in the anxiety disorder literature. It is defined as a behavior performed as a strategy intended to prevent or minimize a feared catastrophe ( Salkovskis, 1996b; Salkovskis et al., 1996, 1986). SSB refers not only to total avoidance of a feared situation (e.g., “I won’t lift anything heavy because that would damage my back”) but also to escape behaviors which are performed to terminate exposure to a feared situation (e.g., “I’ll stop doing these household chores at the first sign of pain in case I damage my back”) and subtle avoidance behaviors which are performed to prevent the feared catastrophe while remaining in the feared situation (e.g., “I’d make sure that I don’t lean forward when I’m holding something heavy because that might break my spine”). Thus, while there is some degree of overlap, SSB is theoretically distinguished from “overt pain behavior” described in the operant theory (e.g., Fordyce, 1982) and “pain avoidance” outlined in the existing cognitive–behavioral models of chronic pain (e.g., Lethem, Slade, Troup, & Bentley, 1983; Philips, 1987; Vlaeyen, Kole-Snijders, Boeren, & van, 1995; Vlaeyen & Linton, 2000). The introduction of the concept of SSB has led to significant advances in the theoretical understanding and clinical management of a range of anxiety disorders (e.g., Salkovskis, Clark, Hackmann, Wells, & Gelder, 1999; Wells, Clark, Salkovskis, & Ludgate, 1995); its specific application to the study of chronic pain under the health anxiety framework therefore needs further development ( Sharp, 2001). This is the purpose of the present study.