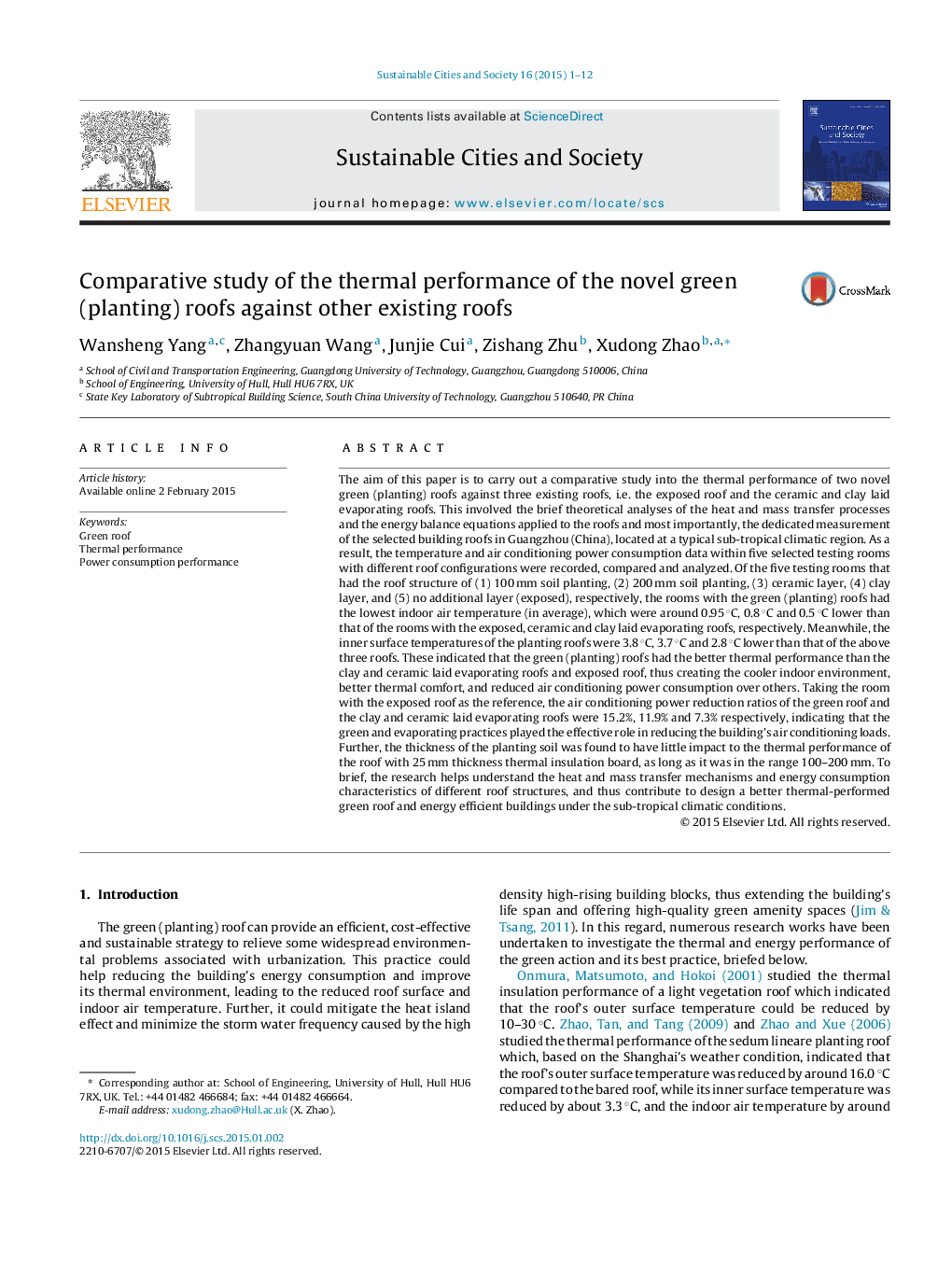 The aim of this paper is to carry out a comparative study into the thermal performance of two novel green (planting) roofs against three existing roofs, i.e. the exposed roof and the ceramic and clay laid evaporating roofs. This involved the brief theoretical analyses of the heat and mass transfer processes and the energy balance equations applied to the roofs and most importantly, the dedicated measurement of the selected building roofs in Guangzhou (China), located at a typical sub-tropical climatic region. As a result, the temperature and air conditioning power consumption data within five selected testing rooms with different roof configurations were recorded, compared and analyzed. Of the five testing rooms that had the roof structure of (1) 100 mm soil planting, (2) 200 mm soil planting, (3) ceramic layer, (4) clay layer, and (5) no additional layer (exposed), respectively, the rooms with the green (planting) roofs had the lowest indoor air temperature (in average), which were around 0.95 °C, 0.8 °C and 0.5 °C lower than that of the rooms with the exposed, ceramic and clay laid evaporating roofs, respectively. Meanwhile, the inner surface temperatures of the planting roofs were 3.8 °C, 3.7 °C and 2.8 °C lower than that of the above three roofs. These indicated that the green (planting) roofs had the better thermal performance than the clay and ceramic laid evaporating roofs and exposed roof, thus creating the cooler indoor environment, better thermal comfort, and reduced air conditioning power consumption over others. Taking the room with the exposed roof as the reference, the air conditioning power reduction ratios of the green roof and the clay and ceramic laid evaporating roofs were 15.2%, 11.9% and 7.3% respectively, indicating that the green and evaporating practices played the effective role in reducing the building's air conditioning loads. Further, the thickness of the planting soil was found to have little impact to the thermal performance of the roof with 25 mm thickness thermal insulation board, as long as it was in the range 100–200 mm. To brief, the research helps understand the heat and mass transfer mechanisms and energy consumption characteristics of different roof structures, and thus contribute to design a better thermal-performed green roof and energy efficient buildings under the sub-tropical climatic conditions.