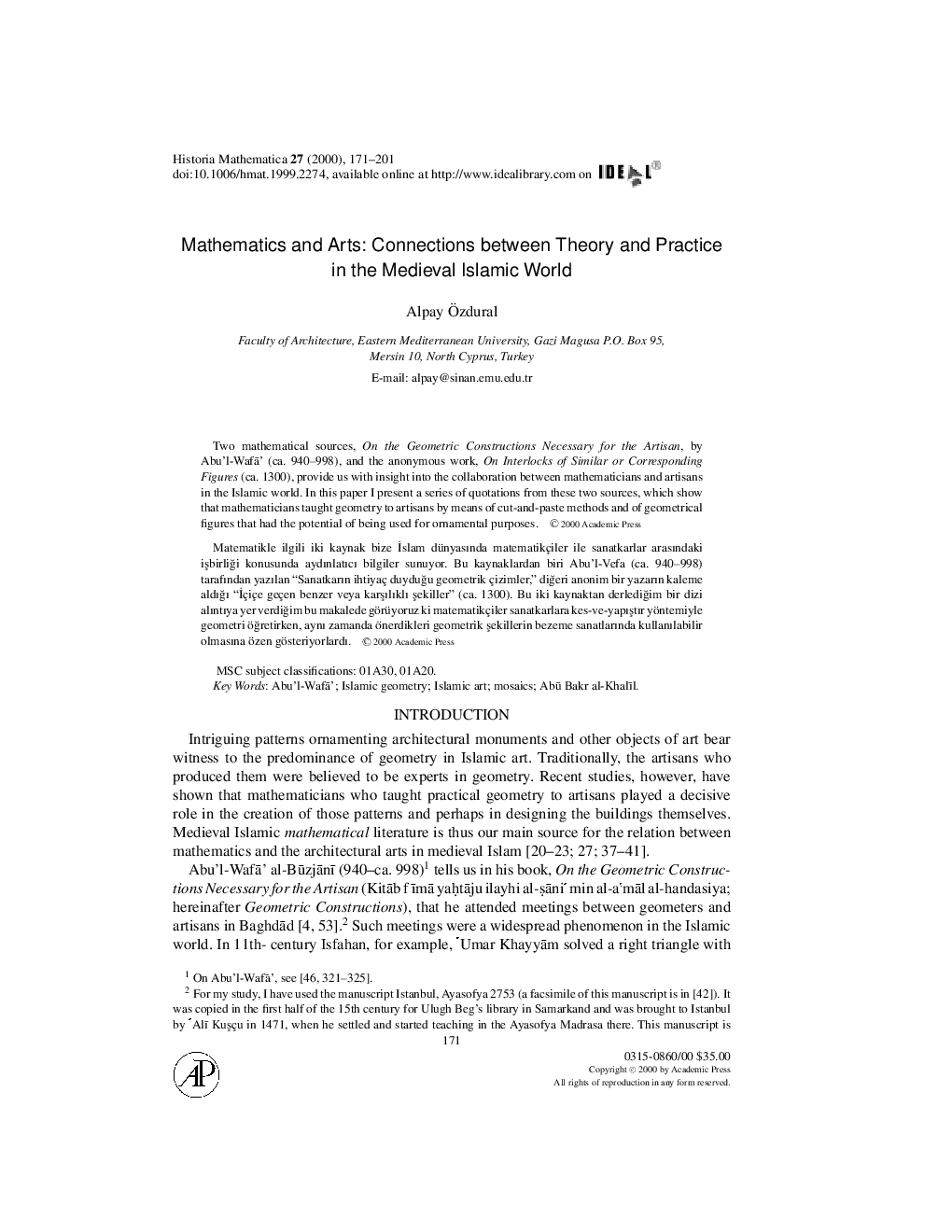 Two mathematical sources, On the Geometric Constructions Necessary for the Artisan, by Abu'l-Wafā' (ca. 940–998), and the anonymous work, On Interlocks of Similar or Corresponding Figures (ca. 1300), provide us with insight into the collaboration between mathematicians and artisans in the Islamic world. In this paper I present a series of quotations from these two sources, which show that mathematicians taught geometry to artisans by means of cut-and-paste methods and of geometrical figures that had the potential of being used for ornamental purposes.

Intriguing patterns ornamenting architectural monuments and other objects of art bear witness to the predominance of geometry in Islamic art. Traditionally, the artisans who produced them were believed to be experts in geometry. Recent studies, however, have shown that mathematicians who taught practical geometry to artisans played a decisive role in the creation of those patterns and perhaps in designing the buildings themselves. Medieval Islamic mathematical literature is thus our main source for the relation between mathematics and the architectural arts in medieval Islam [20–23; 27; 37–41]. Abu’l-Waf¯a’ al-B¯uzj¯an¯ı (940–ca. 998)1 tells us in his book, On the Geometric Constructions Necessary for the Artisan (Kit¯ab f ¯ım¯a yah. t¯aju ilayhi al-s. ¯ani min al-a m¯al al-handasiya; hereinafter Geometric Constructions), that he attended meetings between geometers and artisans in Baghd¯ad [4, 53].2 Such meetings were a widespread phenomenon in the Islamic world. In 11th- century Isfahan, for example, Umar Khayy¯am solved a right triangle with the aid of a cubic equation in an untitled treatise. He explained that the treatisewas prompted by a question at a meeting, which seems to have been attended by artisans and geometers [12; 31; 34; 43]. In the 15th century, Ghiy¯ath al-D¯ın Jamsh¯ıd al-K¯ash¯ı solved a problem about a triangular leveling instrument at the construction site of the astronomical observatory in Samarkand during a meeting of artisans, mathematicians, and other dignitaries [29, 101]. We learn from Ca fer Efendi that meetings between architects and geometers were held frequently in Istanbul in the late 16th and early 17th centuries [16, 28]. Ca fer Efendi reportedly compiled a treatise from his notes taken at such meetings over a period of 20 years [16, 22–23], although no copies of this treatise have yet been found. Here, I discuss an anonymous Persian work on ornamental geometry, which may be similar to the lost work by Ca fer Efendi, and which seems to have been compiled from notes taken by a scribe at a series of meetings between geometers and artisans.3 The title of the work appears as a vertical marginal note: Interlocks of Similar or Corresponding Figures (F¯ı tad¯akhul al-ashk¯al al-mutash¯abiha aw al-mutaw¯afiqa; hereinafter Interlocks of Figures) [11]. This work can be dated to around 1300 because the mathematician, Ab¯u Bakr al-Khal¯ıl al-T¯ajir al-Ras.ad¯ı (ca. 1300),4 is cited twice as one of the participants of the discussions, and the text probably came from Tabr¯ız.5 The mathematicians seemed pleased to be introduced to a field full of rewarding concrete applications. For instance, Umar Khayy¯am says, “If it were not for the highness of this meeting, may its highness last forever, and for the appropriateness of the proposer of the question, may God bless him, I would have been far away from this field” [12, 336; 43, 90]. It is thus conceivable that some of the aesthetic, spatial, and structural innovations of Islamic architecture are due to mathematicians.6 The meetings between mathematicians and artisans were normally not documented, but fortunately there are exceptions. The account by Abu’l-Waf¯a’ in Geometric Constructions and the descriptions in Interlocks of Figures provide insights into how mathematicians and artisans collaborated. At some sessions, mathematicians gave instructions on certain principles and practices of geometry. At others, they worked on geometric constructions of two- or three-dimensional ornamental patterns or gave advice on the application of geometry to architectural construction. Below, I argue that the mathematicians used cutand- paste methods as a didactical tool in teaching geometry to artisans. By presenting literal dedicated to the Buyid ruler Al-Mans. ¯ur Bah¯a’ al-Dawla, who is referred to by the title Sh¯ahinsh¯ah. This title could have been used only for the rulers of Persia, and Al-Mans. ¯ur was the ruler of Persia from A.D. 998 to 1013. Therefore, the text was probably compiled by a student of Abu’l-Waf ¯a’ after the death of his master in 998. This argument can be supported by the fact that passages such as “Abu’l-Waf ¯a’ (or the professor or the sage) said” appear in the text. For other manuscript copies, commentaries, and modern translations of Abu’l-Waf ¯a’s text, see [1–3; 5–8; 14–15; 32–33; 42; 47–48]. 3 In [40], I have argued that this treatise was a compilation of notes taken over a period of time. 4 According to the information kindly provided byMohammadBagheri and Mehran Akhbarifar (both ofTehran), Ab¯u Bakr al-Khal¯ıl is cited as the father of the copyist of a manuscript in Mashhad. Since the manuscript was copied in 1327–1328, Ab¯u Bakr al-Khal¯ıl must have been active around 1300. The only other available information about this mathematician is a remark found at the end of an anonymous undated Persian treatise (in the same Paris manuscript as Interlocks of Figures), praising him as “the pride of geometers” [10, 118v]. 5 The provenance of Interlocks of Figures and the milieu in which it was written will be discussed below, and in my English translation with commentary, to appear in due course. For modern studies on this work, see [13, 315–340; 15, 73–95; 17–19; 35, 129–181; 40]. 6 In [41], I have argued that Umar Khayy¯am was the designer of the North Dome Chamber of the Friday Mosque of Isfahan, which is celebrated for the maturity and elegance of its proportions. translations with modern interpretations of passages from the Geometric Constructions and from the Interlocks of Figures, I aim to shed light on the exact nature of the collaboration between mathematicians and artisans in the medieval Islamic world.

We have little information on what artisans of the Islamic world knew about geometry, but we learn from several sources that mathematicians, throughout the centuries, taught the basic principles of geometry to artisans and architects. In this brief study of Geometric Constructions (ca. 998) and Interlocks of Figures (ca. 1300), I have argued that mathematicians used cut-and-paste methods in their teaching of geometry for two purposes: to prove the correctness of certain constructions in a concrete way that could be easily understood by the artisans, and to present the constructions in such a way that the figures could be used to create new decorative patterns. In the hands of some talented mathematicians, the method turned out to be very effective and led to the discovery of a number of new patterns that became quite popular. Thus the artisans and architects of the Islamic world benefited from the cooperation and expertise of these mathematicians, who enriched Islamic art and architecture. The same artisans, however, did not seem to use the opportunity to develop their own knowledge of geometry. Although Abu’l-Waf¯a’ wrote his Geometric Constructions especially for that purpose, the Interlocks of Figures shows that artisans were still dealing with geometry in their unmethodical and incorrect way three centuries after Abu’l-Waf¯a’. The reason may have been that artisans always had access to the advice of mathematicians at their meetings, and therefore never took the trouble to acquire the knowledge themselves. Ca fer Efendi reported that a mathematician who taught geometry to artisans of the royal court in Istanbul still complained in 1570 about their ignorance of geometry. His words suggest that not much had changed in the six centuries after Abu’l-Waf¯a’’s time: “Regarding that which is called the science of geometry, in this age, if the science of geometry is discussed among architects (mi mar) and learned men ( ¯alim), each one [of the architects] will answer, ‘Yes, we have heard of it, but in essence we have not heard how the science of geometry works and what it deals with’” [16, 28].