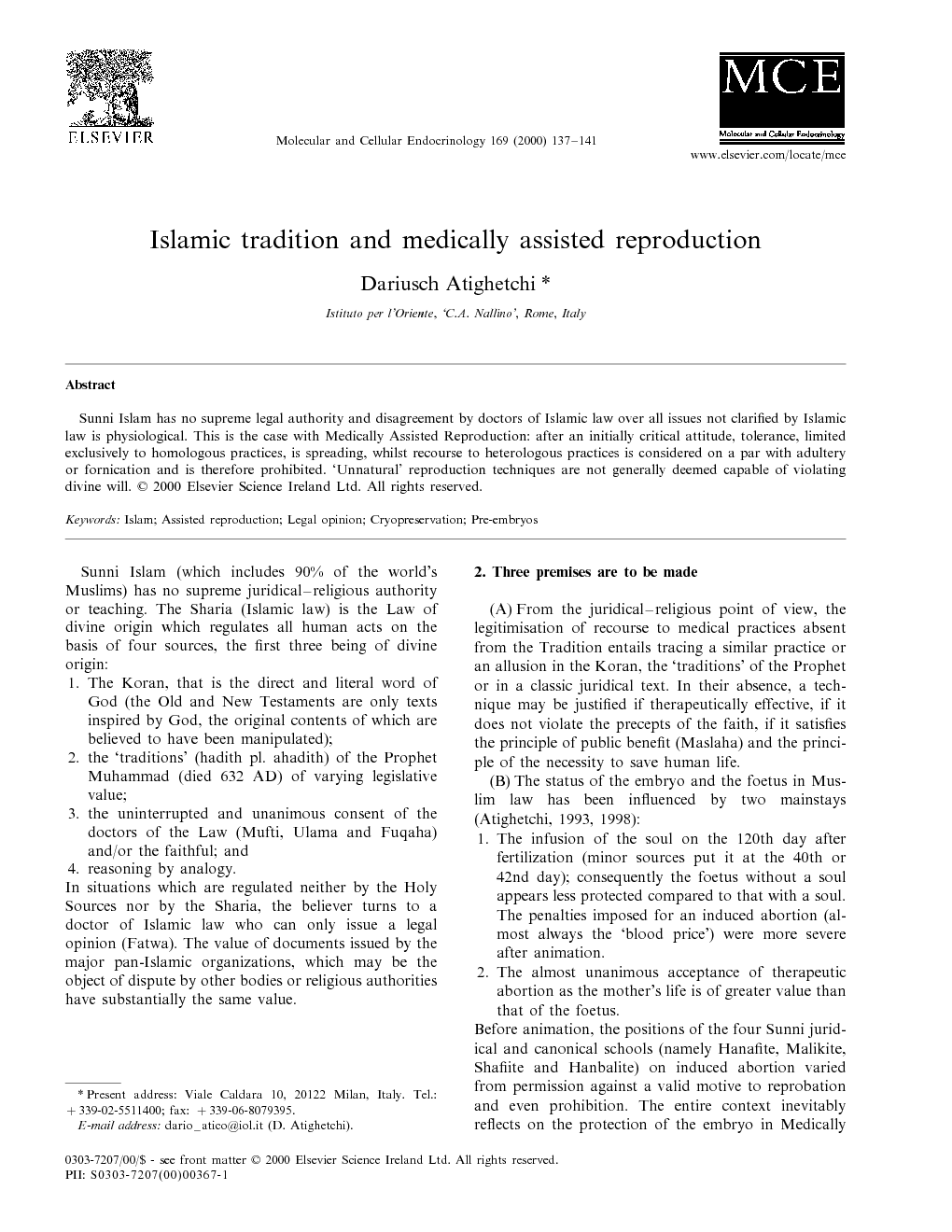 Sunni Islam has no supreme legal authority and disagreement by doctors of Islamic law over all issues not clarified by Islamic law is physiological. This is the case with Medically Assisted Reproduction: after an initially critical attitude, tolerance, limited exclusively to homologous practices, is spreading, whilst recourse to heterologous practices is considered on a par with adultery or fornication and is therefore prohibited. ‘Unnatural’ reproduction techniques are not generally deemed capable of violating divine will.

The first successful experiment of artificial fertilization (Fivet) in the Arab world appears to have been carried out in Jordan in 1987. This took place after a Fatwa pronounced by the Mufti of the Hashemite kingdom, Sheikh Ezzedine al-Khatib, who stated he was in favour of the practice on condition that the parents were married; the result was the birth of two male twins from two mothers (Le Monde, 5/5/1997). Despite the fact that modern medical centres are often capable of using the most advanced reproductive techniques, artificial insemination remains rarely practised due to diffidence caused by religious, cultural, social and economic factors. Due to the high running costs of these centres, the States prefer to leave their management to private initiative, thus limiting the clientele however to the affluent classes. Moreover, these countries have other priorities to deal with in the socio-sanitary field, demographic growth for example, the reason why the legislative effort of the States to regulate artificial reproduction remains weak, until there is agreement between the political and the religious authorities on the subject. (Aboulghar, 1990). The vast majority of Muslim states do not have specific legislation regulating MAR practices. In Malaysia and Saudi Arabia, ministerial regulations are applied. In the Saudi kingdom and Indonesia, authorization for the centres comes from government authorities. In Lebanon, Tunisia and in other states the directives of the professional associations are followed. One emblematic exception both for the itinerary followed and the solution adopted, is represented by the Libyan Arab Republic, the first Arab country to establish legislation with Law 175 of 7/12/1972, art. 403 a–b of the penal Code which prohibited any kind of artificial insemination, whether homologous or heterologous. This totally negative position was surpassed in 1986 by Law 17 on medical responsibility which accepts artificial insemination and homologous FIVET if necessary, with the consent of the couple and when the marriage is valid. In Muslim countries where reproductive techniques are used, they are exclusively for married heterosexual couples, even if travel to certain Western countries for heterologous fertilization by couples with serious problems of fertility is on the increase. Cryopreservation of embryos takes place (Schenker and Shushan, 1996) in Iran, Jordan, Malaysia, Lebanon and Pakistan. It is not carried out in Indonesia, Saudi Arabia and the Gulf States. Micromanipulation is generally carried out, with the exception of Malaysia, Pakistan and Indonesia. Multiple pregnancy reduction is practised in Jordan, Malaysia, Lebanon and Saudi Arabia; it appears to be absent in Indonesia, Iran and Pakistan.