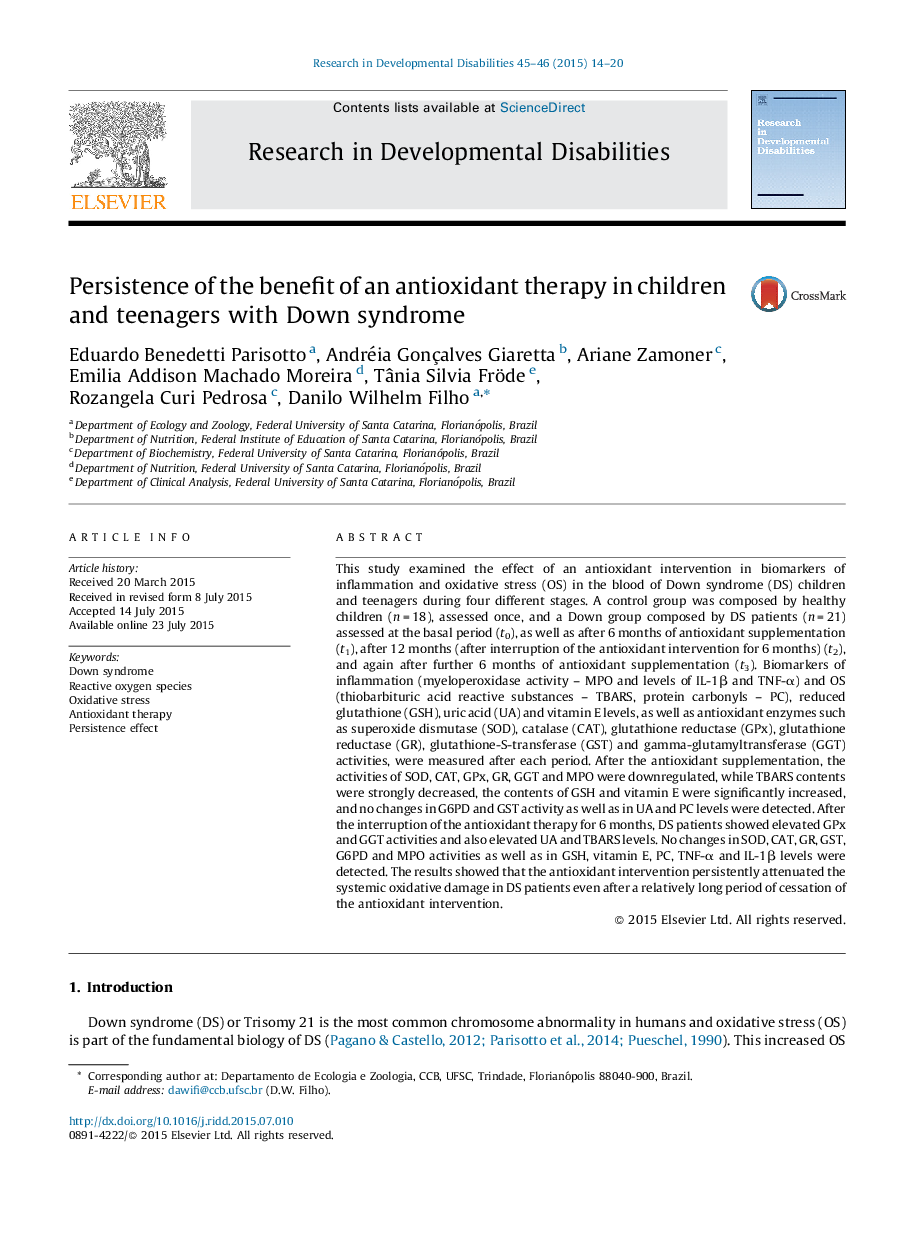 This study examined the effect of an antioxidant intervention in biomarkers of inflammation and oxidative stress (OS) in the blood of Down syndrome (DS) children and teenagers during four different stages. A control group was composed by healthy children (n = 18), assessed once, and a Down group composed by DS patients (n = 21) assessed at the basal period (t0), as well as after 6 months of antioxidant supplementation (t1), after 12 months (after interruption of the antioxidant intervention for 6 months) (t2), and again after further 6 months of antioxidant supplementation (t3). Biomarkers of inflammation (myeloperoxidase activity – MPO and levels of IL-1β and TNF-α) and OS (thiobarbituric acid reactive substances – TBARS, protein carbonyls – PC), reduced glutathione (GSH), uric acid (UA) and vitamin E levels, as well as antioxidant enzymes such as superoxide dismutase (SOD), catalase (CAT), glutathione reductase (GPx), glutathione reductase (GR), glutathione-S-transferase (GST) and gamma-glutamyltransferase (GGT) activities, were measured after each period. After the antioxidant supplementation, the activities of SOD, CAT, GPx, GR, GGT and MPO were downregulated, while TBARS contents were strongly decreased, the contents of GSH and vitamin E were significantly increased, and no changes in G6PD and GST activity as well as in UA and PC levels were detected. After the interruption of the antioxidant therapy for 6 months, DS patients showed elevated GPx and GGT activities and also elevated UA and TBARS levels. No changes in SOD, CAT, GR, GST, G6PD and MPO activities as well as in GSH, vitamin E, PC, TNF-α and IL-1β levels were detected. The results showed that the antioxidant intervention persistently attenuated the systemic oxidative damage in DS patients even after a relatively long period of cessation of the antioxidant intervention.