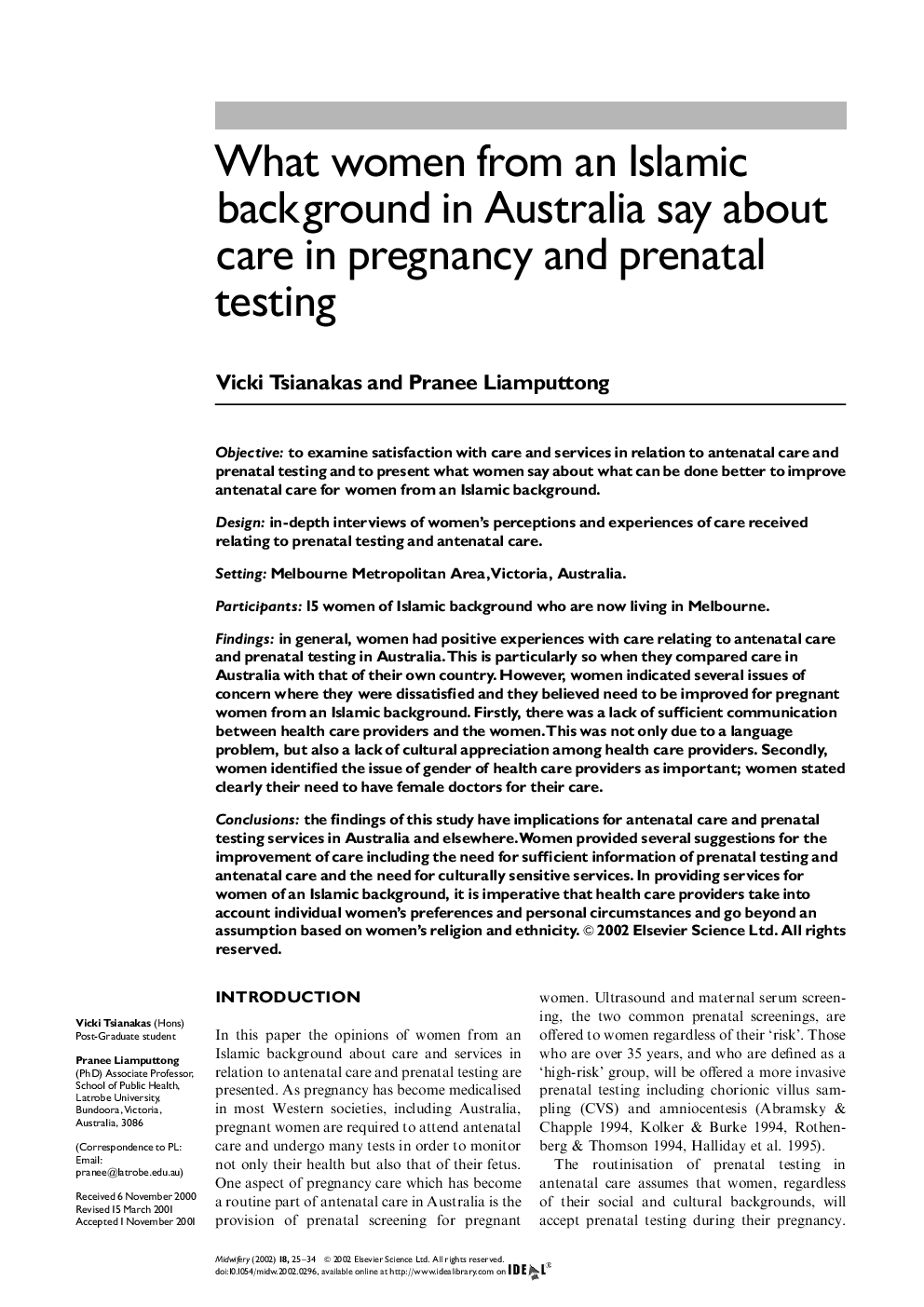 Objective: to examine satisfaction with care and services in relation to antenatal care and prenatal testing and to present what women say about what can be done better to improve antenatal care for women from an Islamic background. Design: in-depth interviews of women's perceptions and experiences of care received relating to prenatal testing and antenatal care. Setting: Melbourne Metropolitan Area, Victoria, Australia. Participants: 15 women of Islamic background who are now living in Melbourne. Findings: in general, women had positive experiences with care relating to antenatal care and prenatal testing in Australia. This is particularly so when they compared care in Australia with that of their own country. However, women indicated several issues of concern where they were dissatisfied and they believed need to be improved for pregnant women from an Islamic background. Firstly, there was a lack of sufficient communication between health care providers and the women. This was not only due to a language problem, but also a lack of cultural appreciation among health care providers. Secondly, women identified the issue of gender of health care providers as important; women stated clearly their need to have female doctors for their care. Conclusions: the findings of this study have implications for antenatal care and prenatal testing services in Australia and elsewhere. Women provided several suggestions for the improvement of care including the need for sufficient information of prenatal testing and antenatal care and the need for culturally sensitive services. In providing services for women of an Islamic background, it is imperative that health care providers take into account individual women's preferences and personal circumstances and go beyond an assumption based on women's religion and ethnicity.

Due to the qualitative nature of the study on which this paper is based, the findings cannot represent the perceptions and the experiences of all women of Islamic backgrounds. Qualitative research does not provide findings which can be generalised. However, it provides readers with a better understanding of women’s subjective experience since the information can be obtained through their own voices (Daly et al. 1997, Liamputtong Rice & Ezzy 1999). Additionally, the findings of this study may have some limitations as, although the women share an Islamic religion, they come from different countries. This difference may influence the opinions given in this study. However, due to its length, it is beyond the scope of this paper to discuss this influence in great depth.