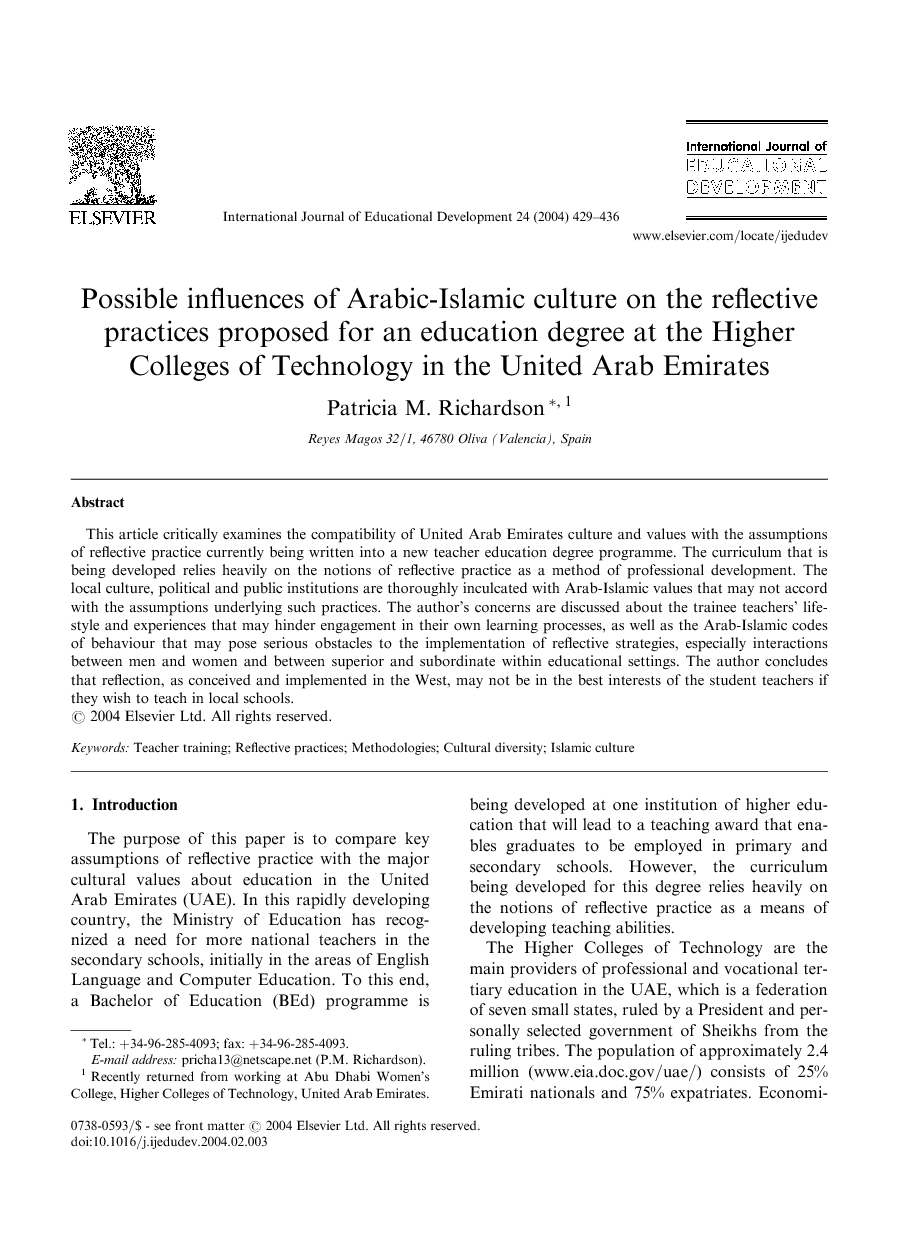 This article critically examines the compatibility of United Arab Emirates culture and values with the assumptions of reflective practice currently being written into a new teacher education degree programme. The curriculum that is being developed relies heavily on the notions of reflective practice as a method of professional development. The local culture, political and public institutions are thoroughly inculcated with Arab-Islamic values that may not accord with the assumptions underlying such practices. The author’s concerns are discussed about the trainee teachers’ lifestyle and experiences that may hinder engagement in their own learning processes, as well as the Arab-Islamic codes of behaviour that may pose serious obstacles to the implementation of reflective strategies, especially interactions between men and women and between superior and subordinate within educational settings. The author concludes that reflection, as conceived and implemented in the West, may not be in the best interests of the student teachers if they wish to teach in local schools.

The purpose of this paper is to compare key assumptions of reflective practice with the major cultural values about education in the United Arab Emirates (UAE). In this rapidly developing country, the Ministry of Education has recognized a need for more national teachers in the secondary schools, initially in the areas of English Language and Computer Education. To this end, a Bachelor of Education (BEd) programme is being developed at one institution of higher education that will lead to a teaching award that enables graduates to be employed in primary and secondary schools. However, the curriculum being developed for this degree relies heavily on the notions of reflective practice as a means of developing teaching abilities. The Higher Colleges of Technology are the main providers of professional and vocational tertiary education in the UAE, which is a federation of seven small states, ruled by a President and personally selected government of Sheikhs from the ruling tribes. The population of approximately 2.4 million (www.eia.doc.gov/uae/) consists of 25% Emirati nationals and 75% expatriates. Economically, massive revenues from oil and gas ‘rents’ accrue directly to the state and the government distributes these oil rents to the national population in the form of secure government jobs, free public education, subsidised housing and medical services. Culturally the Emirates represent a stronghold of Muslim-Arab values which drive all aspects of life, as shown in the lack of separation between civil and religious law (Richardson, 2002). The private sector of the economy is run mainly by an expatriate labour force and, until recently, jobs in this sector held little appeal for nationals, due to the lower salaries given and longer working hours required compared with the public sector. However, the UAE government recently instigated a programme of nationalisation in all sectors with a view to reducing the country’s reliance on expatriate workers. This is partially driven by expressed concern from the government and Emirati society that traditional Arab-Islamic values are being eroded by “western” values, even though this appears to conflict with their desire for economic globalization and demand for international business practices. Despite these conflicts, UAE educational policy and practice is strongly influenced by cultural and religious ideologies (Richardson, 2002). At the Higher Colleges of Technology (HCT), several teacher education programmes are being developed to cater for future Emiratisation (nationalisation) of the teaching profession. According to National Consultative Council officials, there is a great need for local teachers in schools and other institutes in the country, and officials called for training of UAE graduates to take up jobs as teachers (Gulf News, 2000). In the case under discussion, I was involved in developing a teaching practicum for the BEd programme. Although the degree could be for both men and women teacher trainees, the concerns I address in this paper are solely about women students, as I worked in a women-only college and my observations and experiences of culture and customs relate mainly to Emirati women students. Colleagues who are developing these degree awards come mainly from Australia, North America, Ireland and the UK, bringing with them ‘western’ notions of knowledge and educational practices. Because of the educational backgrounds and experiences of these curriculum writers, reflective practices are automatically included as key components of teacher education programmes. Such inclusion can be attributed to the popularity and widespread influence of the constructivist paradigm, in particular, its use on professional development courses at postgraduate level in Australia and Great Britain (Crossley and Vulliamy, 1997). These reflective practices are assumed to be essential elements in the development of teaching effectiveness and promoting a sense of professionalism among trainee teachers. As Irvine (1999: 1) says, to enable this, … opportunities for critical reflexiveness that go beyond simply the review of practice and classroom management skills will have to be regarded as a central element. Trainee teachers, therefore, will need to be required to interrogate curriculum content, context and value, along with establishing its relevance for the students they teach, to ensure that the skills, knowledge and understanding gained by their students are helping to prepare them for the uncertainty of the world to come. As Minnis (1999) reports in his article about Brunei’s education system, (which is also a predominantly Muslim country), many western teacher educators are committed to a constructivist epistemology and ideology, “that is one in which knowledge is personally empowering and fulfilling and, through individual enlightenment, society is enriched’’ (Grundy & Hatton 1995 cited by Minnis 1999: 172). Minnis also cites recent research that emphasises the problems that can occur when western educational concepts and innovations are uncritically transferred to foreign cultures. This is supported by Hofstede, 1980 and Hofstede, 1997 comparative studies on the problems occurring when western business practices are imported to developing countries. Minnis concludes that educational practices must be filtered through the local culture if they are to be successfully adapted and states that a ‘culture-sensitive’ pedagogy for developing countries is needed, using curricula and teaching methods that take account of the day-to-day behaviour patterns at home and in schools which would be more relevant to students’ understanding.

This paper has attempted to demonstrate that the cultural value frameworks underpinning society and education in the United Arab Emirates carry with them assumptions about the social world and about teaching and learning that are incongruent with the underlying assumptions of reflective practice. Although there has been no research done of how the Emirati students view the conflict between ‘western’ and ‘eastern’ values and beliefs, it is clear that cultural values represent powerful constraints on individual behavior which could limit the success of reflective practices for trainee teachers in local schools. Even though the HCT was invited to set up a tertiary educational institution based on a ‘western’ curriculum, it is not unreasonable to suggest that the Arab, Islamic beliefs and values of the society do not readily lend themselves to the transfer of western teacher education concepts and models. It is possible that the teaching practice could start with the technical level of reflection where trainees would be encouraged to reflect on their teaching strategies, classroom management skills and assessment procedures. I also recommend that supervisors and curriculum writers should be made more aware of the cultural influences on such concepts as reflexive practice, so that the curriculum is culturally grounded and therefore more relevant to students’ understanding. The HCT also needs to strengthen the relationship with local schools to ensure cooperation and goodwill between the sectors before attempting to persuade the schools to engage in the different needs required for a reflective teaching practicum. I conclude with a quote that suggests a convergence of ideas may be occurring. It sets out the fundamental convictions of The Arab Education Forum whose purpose is to create an on-going dialogue concerning education, in the broadest sense, in Arab countries: Sustainable development is built on what people have, and not on what people lack. The most valuable asset every person/group has is their experiences and what they do. Reflecting on one’s practice and expressing what people do are, thus, the most valuable abilities/habits one can acquire in relation to learning. In addition, they are crucial in building authentic Arab discourse and thought concerning education, and in contributing to current discussions concerning education around the world.