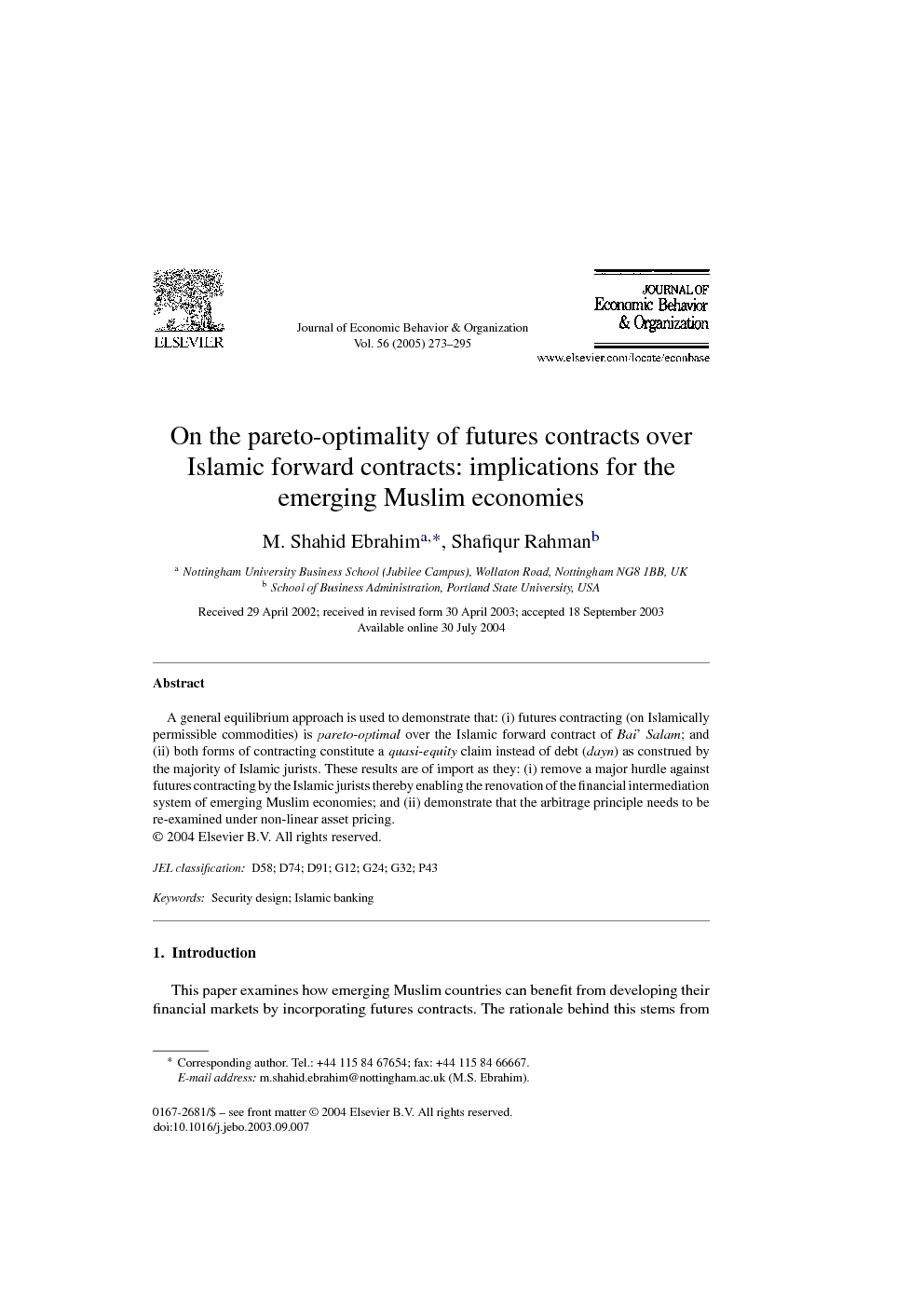 A general equilibrium approach is used to demonstrate that: (i) futures contracting (on Islamically permissible commodities) is pareto-optimal over the Islamic forward contract of Bai’ Salam; and (ii) both forms of contracting constitute a quasi-equity claim instead of debt (dayn) as construed by the majority of Islamic jurists. These results are of import as they: (i) remove a major hurdle against futures contracting by the Islamic jurists thereby enabling the renovation of the financial intermediation system of emerging Muslim economies; and (ii) demonstrate that the arbitrage principle needs to be re-examined under non-linear asset pricing.

This study investigates the efficiency of conventional futures over that of the classical Bai’ Salam contract. Despite the subtle difference in the timing of the payment of the two contracts, we find the futures contract to be pareto-optimal. This is due to the fact that the futures contract is more flexible under agent heterogeneity in the form of level endowments (wealth) and risk aversion. This result has implications for mainstream economists as it implies that the concept of arbitrage needs to be re-examined under non-linear asset pricing. Furthermore, our result, identifying futures as a quasi-equity claim, eliminates a major hurdle against their implementation: their classification as debt (dayn) by the majority of the contemporary Islamic scholars. Our results are consistent with the framework of the Islamic law (Shari’ah) as elaborated earlier. Since the objective (maqsad) of the Islamic law (Shari’ah) (as advocated by Ibn Qayyim Al-Jawziyya) is the welfare of the people in this world as well as in the hereafter, we conclude that the welfare of the emerging Muslim economies would be reinforced by substituting modern futures on Islamically allowed commodities for Bai’ Salam. Currently four Muslim countries (Indonesia, Kazakhstan, Malaysia and Turkey) have initiated the same in a limited way ( Bacha, 2002, Kamali, 2002 and Peck, 2000). The remaining Muslim countries need to follow their trend to benefit from the effects of financial deepening. The welfare gains anticipated by modernizing the financial intermediation of emerging Muslim countries would lead to their economic expansion. Our results also have major implication for global banking industry in general and Islamic banking in particular. In the last two decades, Islamic banks have grown in size and number around the world. Even conventional commercial banks from developed countries have started to offer Islamic banking services. Islamic banking and its expansion worldwide depend on the ability of the industry to develop and offer a wide range of more creative and competitive products. The introduction of a financially engineered package consisting of conventional futures contracts on Islamically permissible commodities and an Islamic credit facility discussed in this paper will allow the industry to move in the right direction.