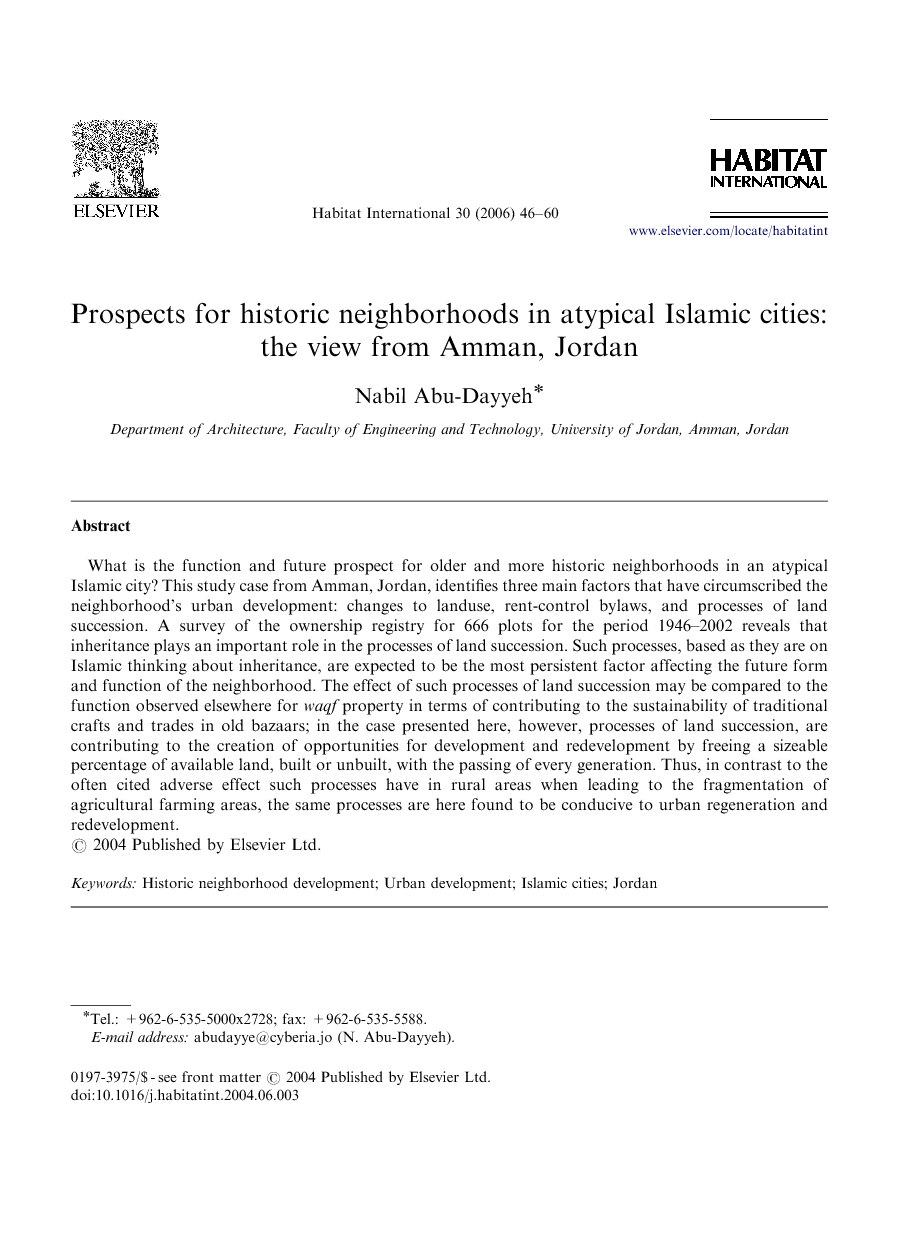 What is the function and future prospect for older and more historic neighborhoods in an atypical Islamic city? This study case from Amman, Jordan, identifies three main factors that have circumscribed the neighborhood's urban development: changes to landuse, rent-control bylaws, and processes of land succession. A survey of the ownership registry for 666 plots for the period 1946–2002 reveals that inheritance plays an important role in the processes of land succession. Such processes, based as they are on Islamic thinking about inheritance, are expected to be the most persistent factor affecting the future form and function of the neighborhood. The effect of such processes of land succession may be compared to the function observed elsewhere for waqf property in terms of contributing to the sustainability of traditional crafts and trades in old bazaars; in the case presented here, however, processes of land succession, are contributing to the creation of opportunities for development and redevelopment by freeing a sizeable percentage of available land, built or unbuilt, with the passing of every generation. Thus, in contrast to the often cited adverse effect such processes have in rural areas when leading to the fragmentation of agricultural farming areas, the same processes are here found to be conducive to urban regeneration and redevelopment.

The intersection of issues related to land ownership and succession, zoning ordinances, rent-control bylaws, and a rising aesthetic and historical consciousness, within one of the historical neighborhoods of Amman, is considered a unique case for understanding the main factors that circumscribe urban development and redevelopment at the scale of a neighborhood. In spite of the uniqueness of this case, the results shed light on possible patterns of urban development not only in other historic neighborhoods of the city of Amman but possibly in other Islamic cities where similar land succession processes, dependent on Islamic thinking about inheritance, are applied. For some time now, processes of land succession have been recognized as a determining force in the shaping of Arab-Islamic cities in general. The formation of the characteristic physical urban fabric of the pre-modern Arab-Islamic city, such as can be seen by looking at the aerial photo of the older parts of traditional Arab-Islamic cities from Fez to Aleppo, woven, as these are, out of a large number of miniscule residential units that have no apparent geometrical order or definition, shouldering each other in a continuous fabric without any setbacks, has been attributed, in great measure, to the specificity of land succession mechanisms that are dependent on Islamic thinking about inheritance. According to Islamic law, all heirs are entitled to a piece of every single inherited property, a house for example, if they so wished, even if the inheritance contains several similar such houses. This had historically lead to the subdivisioning of property, even single houses among different heirs, and resulted in the familiar and characteristic closely-knit physical urban fabric, which in turn had led to complex rules about right of access, privacy, noise and pollution controls, that have formed the core of much Islamic thinking about urban legislation and practice (Al-Hathloul, 1981 and Al-Hathloul, 1994). In rural areas, however, such processes of land succession have long been identified as having an adverse effect leading, as they often do, to the fragmentation of agricultural farming areas into farming areas too small to be sustainable and/or economically viable. In one documented case from Jordan, such processes of land succession had been shown to be operational in rural areas even long before Land Registration became institutionalized during the Ottoman reforms in the second half of the nineteenth century (Wahlin, 1994), and well before land settlement operations during the British Mandate Period (Fischbach, 1994). No research, however, has yet been done in urban areas to determine what role these processes might be having on the present form and future prospects of the physical urban environment in the contemporary Arab city. Evidently, unlike their historical role where these processes had significantly influenced the morphology of the physical urban fabric of the city, their role in the contemporary city is circumscribed by the currently applicable planning ordinances which on the whole include a limitation on minimum plot area, a matter that currently acts to prevent the continuous and endless subdivisioning of plots and/or buildings according to past Islamic practice witnessed in many of the traditional Arab-Islamic cities and which had permitted the most miniscule subdivisioning of a property if so demanded by any one of the legitimate heirs. Nevertheless, even though such processes of land succession are today circumscribed by currently applicable planning ordinances, and as such cannot affect the same miniscule urban fabric as historically witnessed in many Arab-Islamic cities from Fez to Aleppo, yet they seem to have a considerable, albeit not so visible or conspicuous, effect on the availability of land, built or unbuilt, for urban redevelopment. In this study case from Amman, capital of the Hashemite Kingdom of Jordan, the study of land registry archives over a period of around 50 years for a considerable number of plots constituting the core of one of the older neighborhoods of Amman, revealed that processes of land succession remain an important element in the overall transformation of land ownership in the neighborhood, and, along with other factors, seem to have contributed to the overall sustainability of the neighborhood through inducing considerable periodic change in property ownership. Moreover, by making land available at competitive prices, these land succession processes seem to have contributed to maintaining the competitiveness of small lower-rent-seeking trades and professions, thus performing a function observed elsewhere for waqf1 property in terms of contributing to the sustainability of traditional crafts and trades in old bazaars, as had been shown for the case of Yazd in Iran (Bonine, 1987), here, however, favoring lower-rent-seeking cultural and artistic establishments, and lower-waged professional occupations with an artistic or cultural inclination.

With the advent of modern physical planning in the 20th century, and, among other things, its almost inevitable associated prescriptions on minimum plot area, the historical importance of processes of land succession in the shaping of the physical urban fabric of the Arab-Islamic city was eliminated, or at best severely restricted. However, along with waqf, that characteristic Ottoman Islamic religious institution, processes of land succession, seem to be the only two remaining institutions that could today qualify a city as Islamic, albeit atypically so. The effect of waqf has recently become a focus of research ( Bonine, 1987 and Ehlers, 1992), but no work has so far been devoted to the analysis of what might have possibly remained of the effect of processes of land succession on the physical urban fabric of the modern city in Islamic contexts, whether directly in the sense historically identified in Arab-Islamic cities ( Al-Hathloul, 1981 and Al-Hathloul, 1994) or indirectly, as has been done here through a close examination of land turnover rates and their connection to construction activity. As had been shown in the study case presented here, rent control mechanisms have acted in a manner that created a kind of inertia or at least a very slow pace of development in the area, while, on the other hand, processes of land succession have acted as a stimulus for development, not withstanding its incremental and slow pace. The two processes have together forged the image and character of this neighborhood, as they must surely many of the older neighborhoods of the city of Amman, and perhaps other Arab cities of the region where similar mechanisms are operative. Thus, in contrast to the adverse effect processes of land succession sometimes have in rural areas, leading, as so often is the case, to the fragmentation of agricultural farmlands, the same processes may be expected in urban areas and under certain conditions, as has been documented in the case study presented here, to have a positive effect on urban redevelopment not only or simply by freeing land, built or unbuilt, for redevelopment at a ratio that can be expected to reach up to 10–15% of the total plot ownership every 30–40 years approximately after its peak construction period, but also at ensuring the competitiveness of its pricing relative to land speculation mechanisms that continuously plague efforts at securing urban land for development and redevelopment particularly in the residential areas surrounding the city center. Consequently, it is important that planners, law-makers and those involved in different forms of urban administration, recognize the different and contrasting effects that processes of land succession have in urban areas, compared to their effect in rural areas, and be able to develop ways of mitigating their adverse effects on agricultural areas without jeopardizing the wholesale elimination of their role in contributing to the availability of land in urban areas, particularly in inner city areas that always have the potential of presenting fresh and innovative opportunities for development and redevelopment.