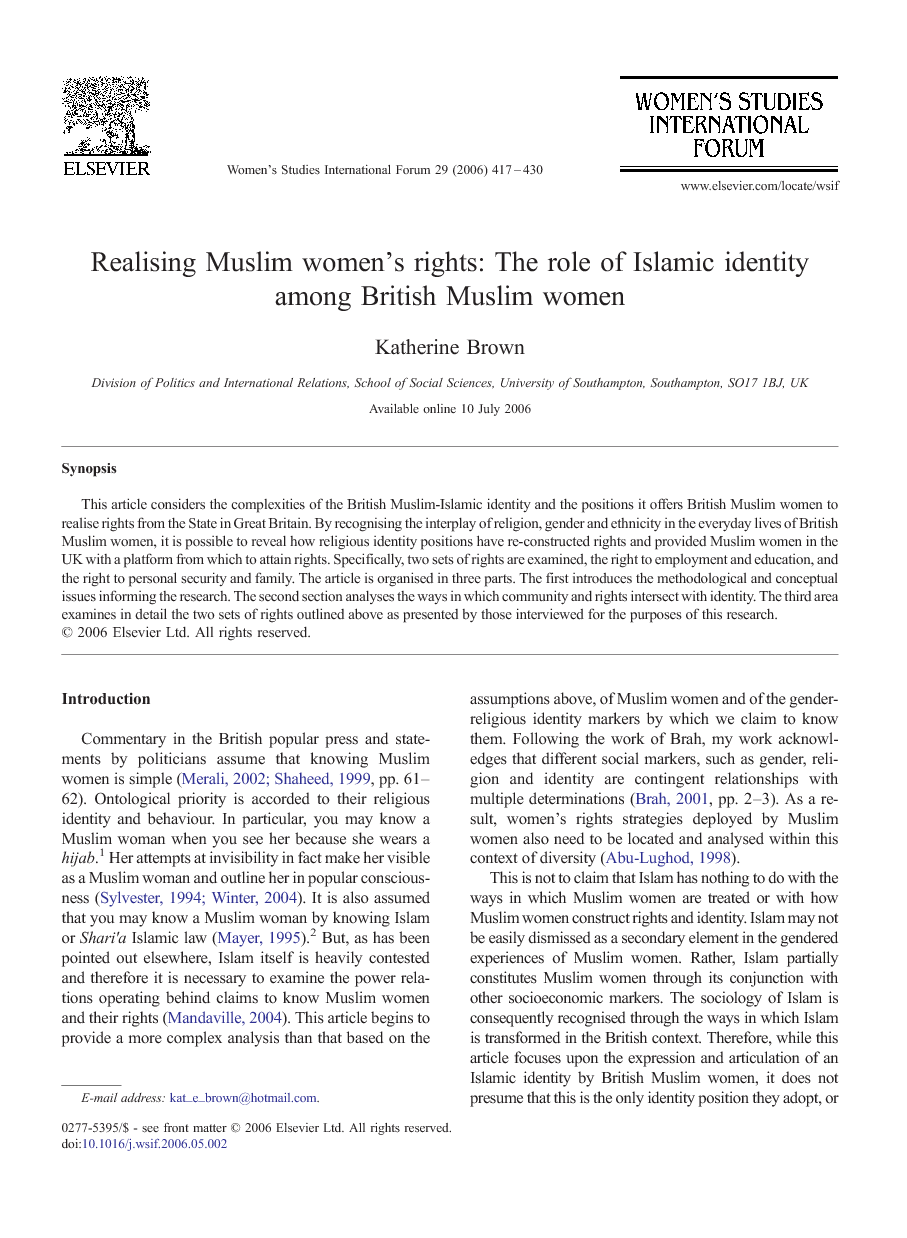 This article considers the complexities of the British Muslim-Islamic identity and the positions it offers British Muslim women to realise rights from the State in Great Britain. By recognising the interplay of religion, gender and ethnicity in the everyday lives of British Muslim women, it is possible to reveal how religious identity positions have re-constructed rights and provided Muslim women in the UK with a platform from which to attain rights. Specifically, two sets of rights are examined, the right to employment and education, and the right to personal security and family. The article is organised in three parts. The first introduces the methodological and conceptual issues informing the research. The second section analyses the ways in which community and rights intersect with identity. The third area examines in detail the two sets of rights outlined above as presented by those interviewed for the purposes of this research.

Commentary in the British popular press and statements by politicians assume that knowing Muslim women is simple (Merali, 2002 and Shaheed, 1999, pp. 61–62). Ontological priority is accorded to their religious identity and behaviour. In particular, you may know a Muslim woman when you see her because she wears a hijab.1 Her attempts at invisibility in fact make her visible as a Muslim woman and outline her in popular consciousness ( Sylvester, 1994 and Winter, 2004). It is also assumed that you may know a Muslim woman by knowing Islam or Shari'a Islamic law (Mayer, 1995).2 But, as has been pointed out elsewhere, Islam itself is heavily contested and therefore it is necessary to examine the power relations operating behind claims to know Muslim women and their rights (Mandaville, 2004). This article begins to provide a more complex analysis than that based on the assumptions above, of Muslim women and of the gender-religious identity markers by which we claim to know them. Following the work of Brah, my work acknowledges that different social markers, such as gender, religion and identity are contingent relationships with multiple determinations (Brah, 2001, pp. 2–3). As a result, women's rights strategies deployed by Muslim women also need to be located and analysed within this context of diversity (Abu-Lughod, 1998). This is not to claim that Islam has nothing to do with the ways in which Muslim women are treated or with how Muslim women construct rights and identity. Islam may not be easily dismissed as a secondary element in the gendered experiences of Muslim women. Rather, Islam partially constitutes Muslim women through its conjunction with other socioeconomic markers. The sociology of Islam is consequently recognised through the ways in which Islam is transformed in the British context. Therefore, while this article focuses upon the expression and articulation of an Islamic identity by British Muslim women, it does not presume that this is the only identity position they adopt, or that it is fixed or completed. The identities of Muslim women are understood here as contextual and relational positionings, and it is suggested that the articulation of an Islamic identity may support Muslim women in their strategic negotiations over the realisation of their rights (Hall, 1992, pp. 252–259). Existing literature on Muslim women's agency and human rights focuses on the phenomena of Islamic feminism and of increased manifestations of female religiosity in the Middle East (Arberry, 1998, Hadad and Esposito, 1998 and Zuhur, 1992). The debate over the validity of “Islamic feminism” centres upon the perceived absence of practical outcomes in the everyday lives of Muslim women (Moghadam, 2002). This article reveals the ways in which the theological strategies of Islamic feminism generate socioeconomic and political outcomes. This reinforces the claim that women's rights articulations are not solely the consequence of abstracted thought processes but of competing forces operating outside and within our current understanding of human rights (Halliday, 1995, p. 150). Additionally, the ways in which Islam operates as a human rights strategy for Muslim women are highly gendered and emerge in contexts constructed by complex gender relations. The article therefore examines the ways in which the adoption of an Islamic identity is a subversion or confirmation of the patriarchal bargain (Kandiyoti, 1988). The concept of patriarchal bargaining implies rational-choice decision-making in the first instance. Kandiyoti (1988), however, argued that the bargains shaped the more unconscious aspects of women's gendered subjectivity, since they permeate the context of their early socialisation, as well as their adult cultural habitus. She further demonstrated that women's strategies varied across communities and classes because the form and mechanism of patriarchy varied across similar fault-lines (Kandiyoti, 1987). These bargains therefore exert powerful influences on shaping gender ideology and on the potential and form of women's active or passive resistance. Through her research in the Middle East she showed that in times of economic change, the nature and form of patriarchy is broken down and transformed, and consequently women's bargaining positions alter (Kandiyoti, 1988). This notion of bargaining also suggests that women are complicit in the maintenance and perpetuation of patriarchal structures as they invest into it through their agency and struggles. In light of this, consideration is given to the Islamic concept of gender complementarity. Gender complementarity is the belief that gender differences are naturally and socially constructed such that men and women's relationships are complementary and work in harmony (Rahman, 1980).

The main conclusion of this article is that although Muslim women are not a homogenous group, the formation of an articulated “Islamic” identity in the public and private spheres by some Muslim women enables them to negotiate and acquire rights in new and transformative ways. Theorising this identity shift as a strategy does not detract from the genuine belief of the women and groups interviewed. What it does show however is that both Islam and rights are altered in this convergence. The attempt to form a culturally-free or pure Islam suggests a moving away from an exclusive concept of faith and ethnicity to one which includes an inclusive normative element, and it is further possible to argue that rights have moved from an abstract legalist moment in these women's lives towards a more “everyday” or “embedded” formation. This tendency of rights to acquire a more socially embedded character is further displayed in situations where the Islamic identity strategy is co-opted as part of alternative strategies to manage other concerns, such as survival and welfare. This may occur, for example, if a marriage fails. This flexibility reinforces the argument that rights discourses have become embedded within British-Muslim Islamic identities. Additionally, adopting an Islamic identity as a strategy to realise rights in the UK operationalises the theoretical developments of Islamic feminists. A number of strategies located in an Islamic identity emerged through the rights-centred case studies: use of a continuous past, reference to and reinterpretation of the holy texts, manipulation of existing gender roles and expansion of these roles. These strategies become possible through the public articulation of an Islamic identity, through the increased speed and efficacy of communications and through the private avowal and reflection of being Muslim. Islamic strategies concerning women's rights are embedded in attempts to reconstruct and reinterpret what Islam means and what it means to be Muslim. In the re-writing of Islamic discourses and concepts, Muslim women have accessed a rights discourse that manages their lives in a secular non-Muslim majority space. The right to be free from domestic violence and the right to marital choice are inherently concerned with women's relations as wives, mothers and daughters and can be therefore addressed from within an Islamic framework which prioritises these female identity markers over others. Similarly by reinvesting educational and employment rights of Muslim women with gender particularity, Muslim women who adopted an Islamic identity were able to draw upon a wider range of actors from whom to seek rights and expand the contexts in which rights could be demanded. In other words the public–private divide, so often assumed in human rights talk, was transcended in the recognition of an Islamic gendered identity.