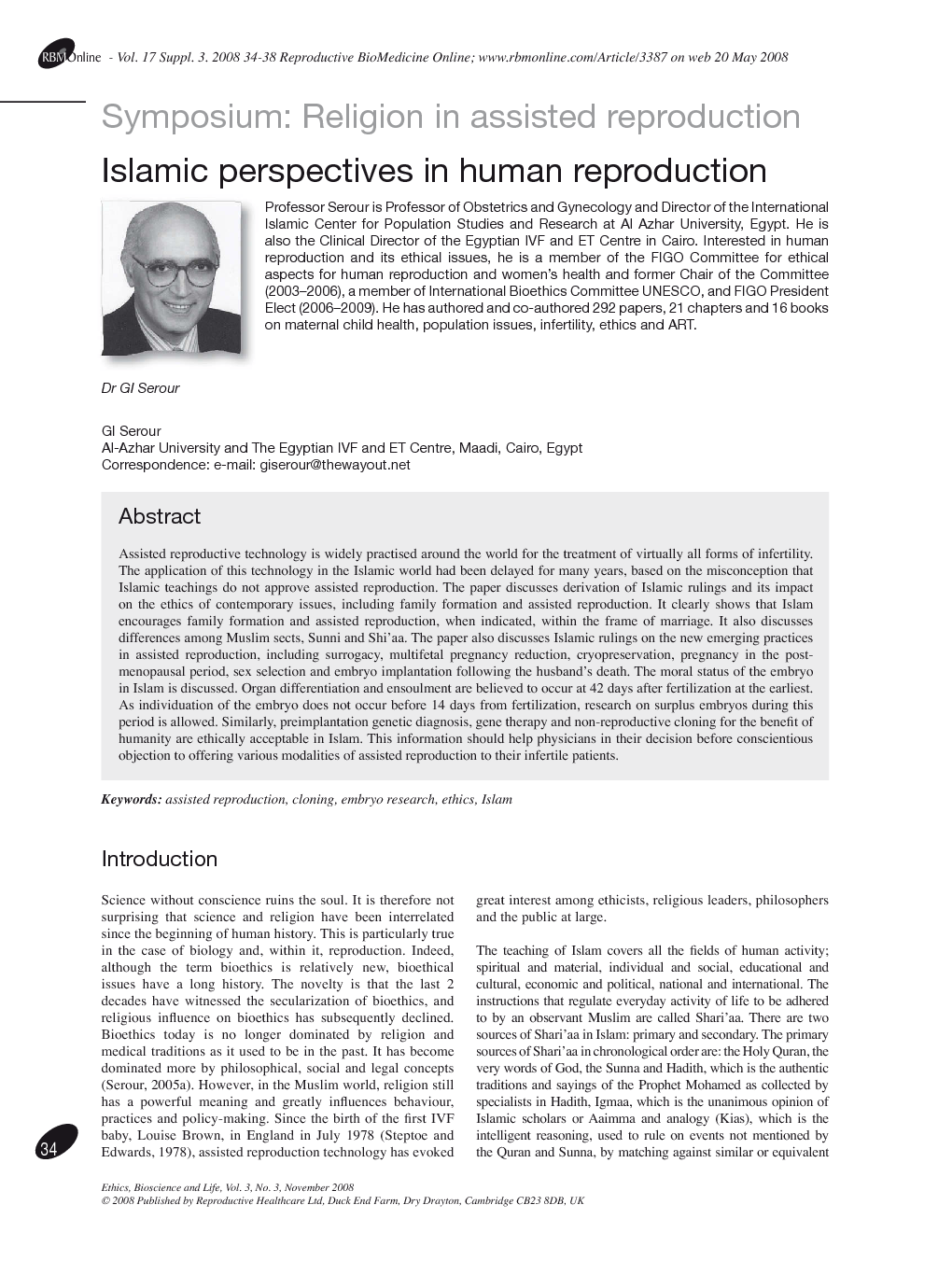 Assisted reproductive technology is widely practised around the world for the treatment of virtually all forms of infertility. The application of this technology in the Islamic world had been delayed for many years, based on the misconception that Islamic teachings do not approve assisted reproduction. The paper discusses derivation of Islamic rulings and its impact on the ethics of contemporary issues, including family formation and assisted reproduction. It clearly shows that Islam encourages family formation and assisted reproduction, when indicated, within the frame of marriage. It also discusses differences among Muslim sects, Sunni and Shi'aa. The paper also discusses Islamic rulings on the new emerging practices in assisted reproduction, including surrogacy, multifetal pregnancy reduction, cryopreservation, pregnancy in the post-menopausal period, sex selection and embryo implantation following the husband's death. The moral status of the embryo in Islam is discussed. Organ differentiation and ensoulment are believed to occur at 42 days after fertilization at the earliest. As individuation of the embryo does not occur before 14 days from fertilization, research on surplus embryos during this period is allowed. Similarly, preimplantation genetic diagnosis, gene therapy and non-reproductive cloning for the benefit of humanity are ethically acceptable in Islam. This information should help physicians in their decision before conscientious objection to offering various modalities of assisted reproduction to their infertile patients.

Science without conscience ruins the soul. It is therefore not surprising that science and religion have been interrelated since the beginning of human history. This is particularly true in the case of biology and, within it, reproduction. Indeed, although the term bioethics is relatively new, bioethical issues have a long history. The novelty is that the last 2 decades have witnessed the secularization of bioethics, and religious influence on bioethics has subsequently declined. Bioethics today is no longer dominated by religion and medical traditions as it used to be in the past. It has become dominated more by philosophical, social and legal concepts (Serour, 2005a). However, in the Muslim world, religion still has a powerful meaning and greatly influences behaviour, practices and policy-making. Since the birth of the first IVF baby, Louise Brown, in England in July 1978 (Steptoe and Edwards, 1978), assisted reproduction technology has evoked great interest among ethicists, religious leaders, philosophers and the public at large. The teaching of Islam covers all the fields of human activity; spiritual and material, individual and social, educational and cultural, economic and political, national and international. The instructions that regulate everyday activity of life to be adhered to by an observant Muslim are called Shari’aa. There are two sources of Shari’aa in Islam: primary and secondary. The primary sources of Shari’aa in chronological order are: the Holy Quran, the very words of God, the Sunna and Hadith, which is the authentic traditions and sayings of the Prophet Mohamed as collected by specialists in Hadith, Igmaa, which is the unanimous opinion of Islamic scholars or Aaimma and analogy (Kias), which is the intelligent reasoning, used to rule on events not mentioned by the Quran and Sunna, by matching against similar or equivalent events ruled on. The secondary sources of Shari’aa are Istihsan, which is the choice of one of several lawful options, views of Prophet’s companions, current local customs if lawful, public welfare and rulings of previous divine religions if they do not contradict the primary sources of Shari’aa. An observant Muslim resorts to secondary sources of Shari’aa in matters not dealt with in the primary sources. Even if the action is forbidden, it may be undertaken if the alternative would cause harm. The Shari’aa is not rigid. It is flexible enough to adapt to emerging situations in different times and places. It can accommodate different honest opinions as long as they do not conflict with the spirit of its primary sources and are directed to the benefit of humanity (Gad El Hak, 2000; Serour, 2002a). Islam is a religion of Yusr (ease) not Usr (hardship) as indicated in the Holy Quran (Sura al Bakara, 2:185). The broad principles of Islamic jurisprudence are permissibility unless prohibited by a text (Ibaha), no harm and no harassment; necessity permits the prohibited and the choice of the lesser harm.

Contrary to the generally held presumption that Muslim law is very restrictive on assisted reproduction, Muslim ethics is far more liberal than its Christian counterpart on various practices in assisted reproduction. Furthermore, egg donation, embryo donation and surrogacy are practiced by the Shi’aa Muslims. MFPR, Sex selection, PGD, and non-reproductive cloning are acceptable practices for many Muslims. When offering assisted reproduction service for his/her patients, it is the duty of the physician to satisfy the needs of his/her patients according to patient’s ethical percept if this does not conflict with the accepted standards of health care. If the physician has a conscientious objection to treatment, it is an ethical obligation to refer the couple to where their needs can be met, as indicated by the FIGO Committee for the Ethical Aspects of Human Reproduction and Women’s Health (FIGO Ethics Committee, 2006b).