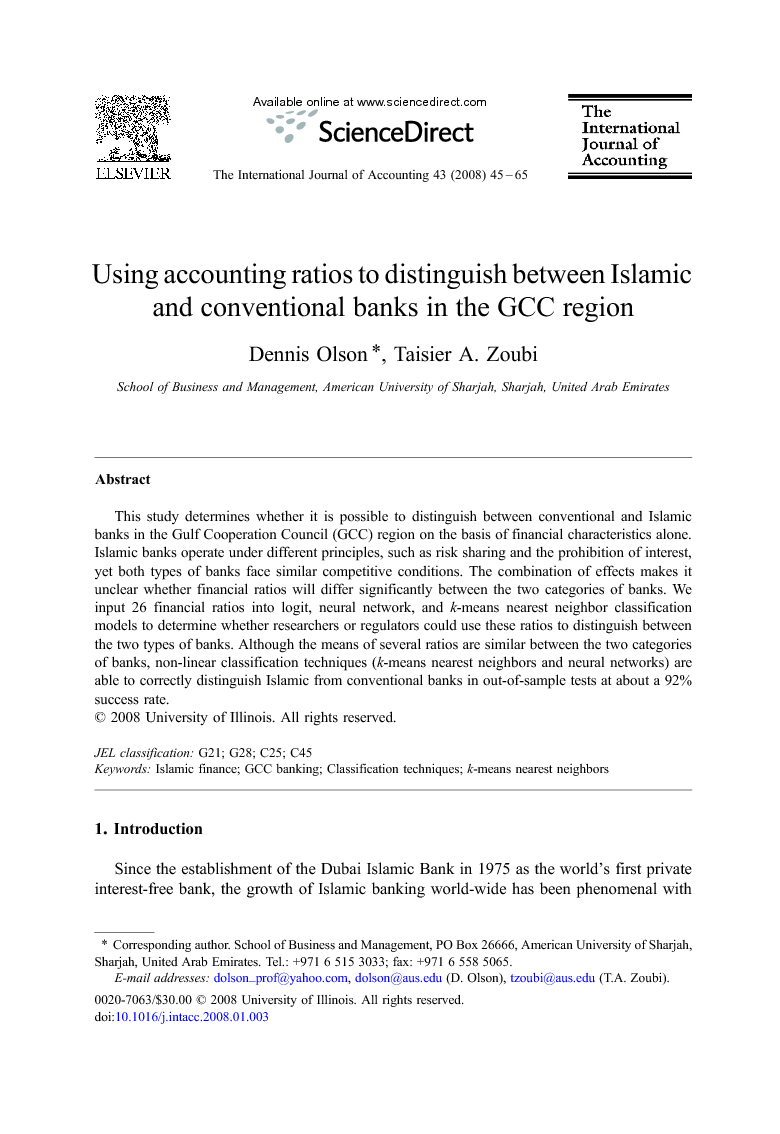 his study determines whether it is possible to distinguish between conventional and Islamic banks in the Gulf Cooperation Council (GCC) region on the basis of financial characteristics alone. Islamic banks operate under different principles, such as risk sharing and the prohibition of interest, yet both types of banks face similar competitive conditions. The combination of effects makes it unclear whether financial ratios will differ significantly between the two categories of banks. We input 26 financial ratios into logit, neural network, and k-means nearest neighbor classification models to determine whether researchers or regulators could use these ratios to distinguish between the two types of banks. Although the means of several ratios are similar between the two categories of banks, non-linear classification techniques (k-means nearest neighbors and neural networks) are able to correctly distinguish Islamic from conventional banks in out-of-sample tests at about a 92% success rate.

Since the establishment of the Dubai Islamic Bank in 1975 as the world's first private interest-free bank, the growth of Islamic banking world-wide has been phenomenal with assets under management generally growing at annual rates of 12% to 15% per year. In Iran, Pakistan, and Sudan the entire banking industry has become Islamic and many large international banks (e.g., HSBC, BNP Paribus, Commerzbank, and Citicorp) have introduced Islamic divisions that offer separate Islamic or Sharia-compliant products within an otherwise conventional banking structure. According to the Institute of Islamic Banking and Insurance (IIBI) there were 277 Islamic banks and financial institutions operating in over 70 countries in 2005.1 IIBI estimated that Islamic banks managed assets worth about 2004) put the figure at $260 billion. Much of the initial growth in Islamic banking occurred in South Asia; however, beginning in the 1990s the primary growth area and focus of Islamic banking shifted to the countries of the Gulf Cooperation Council (GCC) region.2Molyneux and Iqbal (2005) estimate that Islamic banks in the GCC region held about 74% of Islamic banking system assets in 2002. Following the events of September 11, 2001, a considerable amount of Arab money flowed out of western countries back to the Middle East. This has further increased the dominance of the GCC region in Islamic banking world-wide.3 The principles guiding Islamic banks are significantly different from those for conventional banks. Islamic banks are organized under and operate upon principles of Islamic law (the Sharia) which requires risk sharing and prohibits the payment or receipt of interest (riba). In contrast, conventional banks are guided mainly by the profit-maximization principle. If the differences between the two types of banks are not just semantic (as some critics of Islamic finance have maintained), Islamic and conventional banks should be distinguishable from one another on the basis of financial information obtained from company balance sheets and income statements. However, since all banks operate in the same competitive environment and are regulated in the same way in most countries, it is possible that Islamic and conventional banks display similar financial characteristics. A sizeable body of research examines the structure, operation, and management of banks in the GCC region [Turen (1995), Murjan and Ruza (2002), Islam (2003), Essayyad and Madani (2003)], while another strand of literature explains general Islamic financial principles to the non-Muslim reader [Siddiqui (1981), Bashier (1983), Khan (1985)]. With the exception of Karim and Ali (1989) and Rosly and Abu Bakar (2003), researchers have not examined the financial ratios of Islamic banks. Karim and Ali (1989) suggest that Islamic banks prefer to obtain funds from depositors rather than shareholders during expansionary periods in an economy. When combined with the requirement for risk sharing, return on equity should be higher for Islamic than for conventional banks. Rosly and Abu Bakar (2003) show that profitability (based upon return on assets, profit margin, and net operating margin) was statistically higher for Malaysian Islamic banks during the period 1996–1999 than for mainstream banks. Operating-efficiency and asset-utilization ratios were smaller for Islamic banks, suggesting that there may be some financial and operational differences between banks. However, they point out that in recent years Islamic banks have chosen to behave more like mainstream banks instead of than strictly following Sharia principles. In summary, the research to date leaves unresolved the question of whether Islamic and conventional banks are operationally different outside of South Asia and whether financial ratios can be used to meaningfully distinguish between the two types of banks. The purpose of this paper is to determine whether Islamic and conventional banks in the GCC region are distinguishable from one another on the basis of financial characteristics alone. Specifically, we consider whether researchers or regulators could correctly categorize a bank as Islamic or conventional using 26 financial ratios. Although many studies have documented the usefulness of accounting information in predicting bankruptcy and credit rating, no research has been conducted on the potential information value of accounting data in distinguishing between Islamic and conventional banks. We collected 237 observations, or bank-years of data, for 141 conventional and 96 Islamic banks operating in the GCC during the period 2000–2005. The sample includes all GCC banks, but excludes international banks operating in the region. Our within-sample analysis shows that a logit model distinguishes between conventional and Islamic banks at a 77.2% accuracy rate. Out-of-sample classification rates range from 85.4% (for logit) to 91.7% accuracy for non-linear classification techniques (k-means nearest neighbors and neural networks). This study proceeds as follows: Section 2 provides background on the differences between Islamic and conventional banks. The GCC banking sector is discussed in Section 3. Section 4 lists the hypotheses to be tested in this study. Section 5 describes the data and defines the accounting ratios used in the study. Section 6 presents in-sample results and interpretations, while Section 7 discusses results for the out-of-sample classification. Section 8 concludes with a discussion of implications, limitations, and suggestions for future research.

The empirical results of this study indicate that measures of bank characteristics such as profitability ratios, efficiency ratios, asset-quality indicators, and cash/liability ratios are good discriminators between Islamic and conventional banks in the GCC region. Such findings are consistent with the literature on corporate failure, credit rating, and assessment of risk that also shows that accounting numbers are useful for classifying firms within the same industry into two or more categories based on financial characteristics. Thus, accounting information is useful not just in developed economies, but also in the developing countries of the GCC region. An initial glance at the data reveals that most accounting ratios are similar for Islamic and conventional banks. This result seems logical since both types of banks operate in the same industry in the same region of the world. It is consistent with central-bank regulations in the GCC region that impose similar regulations on all banks. For example, financial-reporting rules and the Basel capital requirements are the same for all banks. Nevertheless, some financial characteristics of Islamic banks are different from those of conventional banks. The best logit model correctly classified about five out of every six banks in out-of-sample tests, while non-linear classification technique correctly classified a bank as Islamic or conventional in about 11 out of every 12 cases. Results from our classification models imply that the operational characteristics of the two types of banks may be different. Islamic banks are more profitable than conventional banks, but probably not quite as efficient. Some of the higher profitability of Islamic banks may be due to risk, while the remainder may be due to the greater reliance on deposits for providing capital. Islamic banks voluntarily hold more cash relative to deposits than conventional banks due to the risk of withdrawal of deposits, but they also maintain lower provisions for possible loan losses (or losses from Ijara leasing and investments for Islamic banks) than conventional banks. Favorable economic conditions in the GCC since the advent of Islamic banking may have masked the unique risks faced by Islamic banks. If these banks are indeed riskier, they may need more careful monitoring and perhaps should be subject to different capital requirements than conventional banks. Such views have also been expressed by Ainley (2000) in “A Central Bank's View of Islamic Banking” where he notes that Islamic banks deal in new and unfamiliar forms of finance where assets are long-term and illiquid. In response, regulators may need to impose higher capital requirements on Islamic banks—particularly during the early years of Islamic bank operations. Each Islamic bank must currently establish a Sharia committee to ensure that it complies with Islamic principles; however, these individual committees do not ensure that Islamic banks as a group have prepared for the risks unique to Islamic banking. There may be a role for central banks in the region to monitor Islamic banks separately from conventional banks and to adopt specific regulations for Islamic banks. For example, the central bank could establish a Sharia committee within an Islamic division to ensure Sharia compliance nation-wide, and to advise banks on modes, procedures, law, and regulations for Islamic banking. The central bank might arrange for an accounting firm to conduct Sharia-compliant audits of Islamic banks, and to create a Sharia audit manual. Flexible, but differential, regulation may increase the confidence of depositors and investors in Islamic banks, provide proper asset/liability management incentives, and maintain financial stability in the GCC banking industry in the future. The limitations of our study include the following. We did not include market-related variables in distinguishing between Islamic and conventional banks. More and more GCC banks are becoming publicly traded, so future research could incorporate market-based accounting ratios to distinguish between types of banks. Another problem, common to most prediction studies, is that the selection of the variables was not based on any economic theory. Although this study considered six years of data, the time period of analysis is still relatively short and only involves years during an economic boom in the GCC region. As the Islamic banking sector matures, and given that 2006 and 2007 have witnessed the possible bursting of a stock market bubble in the region, results might change as more years of data are collected. Also, the scope of the analysis could be broadened to consider banks in other Muslim countries and to make comparisons between Islamic banks across countries. Finally, it would be interesting to examine whether the financial ratios presented in this paper could be used for risk assessment, forecasting bank profitability, or providing early warning signals of banking problems in various countries.