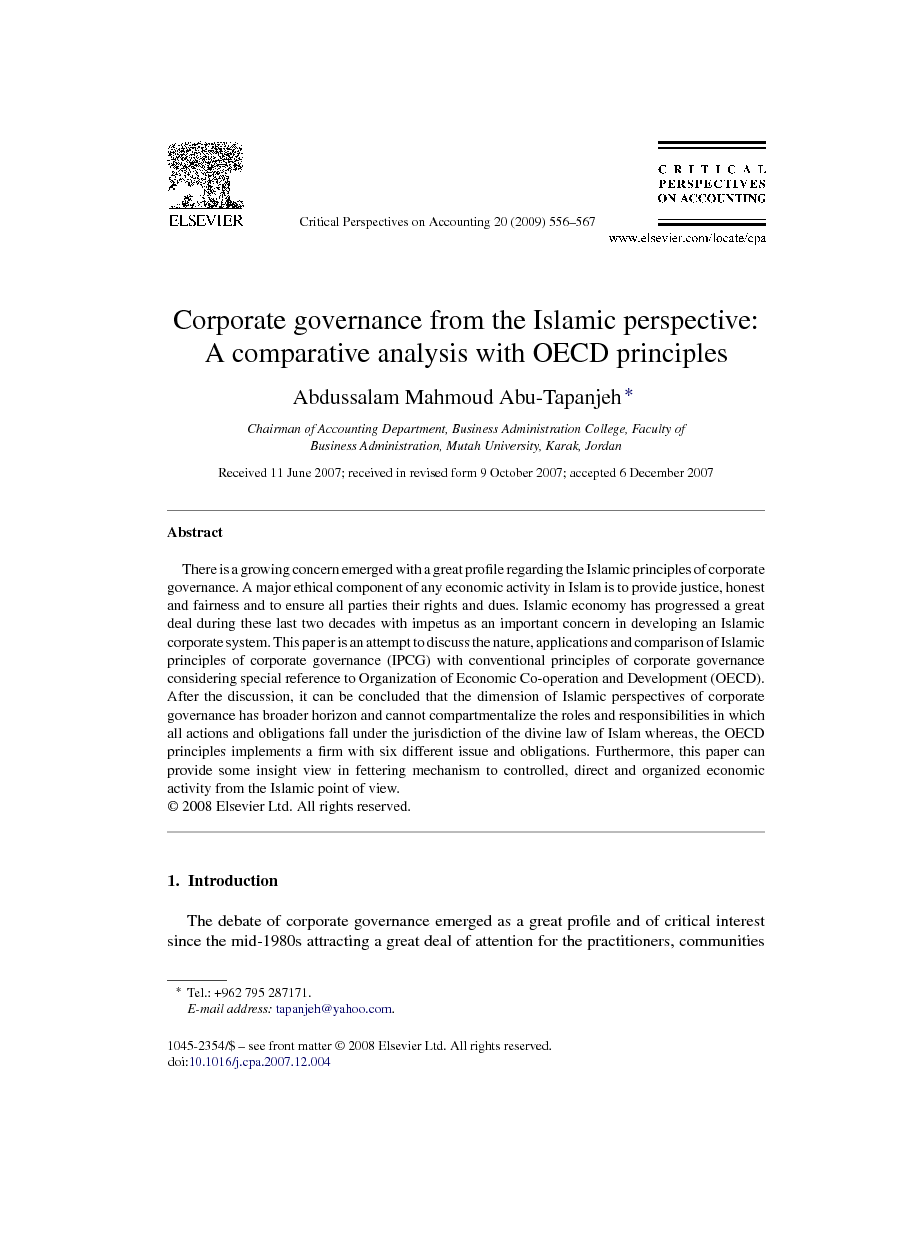 There is a growing concern emerged with a great profile regarding the Islamic principles of corporate governance. A major ethical component of any economic activity in Islam is to provide justice, honest and fairness and to ensure all parties their rights and dues. Islamic economy has progressed a great deal during these last two decades with impetus as an important concern in developing an Islamic corporate system. This paper is an attempt to discuss the nature, applications and comparison of Islamic principles of corporate governance (IPCG) with conventional principles of corporate governance considering special reference to Organization of Economic Co-operation and Development (OECD). After the discussion, it can be concluded that the dimension of Islamic perspectives of corporate governance has broader horizon and cannot compartmentalize the roles and responsibilities in which all actions and obligations fall under the jurisdiction of the divine law of Islam whereas, the OECD principles implements a firm with six different issue and obligations. Furthermore, this paper can provide some insight view in fettering mechanism to controlled, direct and organized economic activity from the Islamic point of view.

The debate of corporate governance emerged as a great profile and of critical interest since the mid-1980s attracting a great deal of attention for the practitioners, communities as the managers, shareholders, investors, regulatory agencies, as well as in the academic research (Abu-Tapanjeh, 2006). The corporate governance is not only one of the main principle in running a firm successfully but also it ensures security confidence by monitoring and controls the operation of the firm. In this present business environment with diverse cultural background, the principles of corporate governance cannot be applied for all propositions. Thus need rigorously to adopt purposefully and implement new corporate rules and regulations that are more robust in the face of rapid financial innovation. This implies that good corporate governance is not just comply with hard and fast rules but also seen as guidelines for a supervisory framework of different environmental structures. Corporate governance need to become principle based, rather than being based on rules and regulations (OECD, 2004). This issue is well addressed by different committees around the world and has been repeated and renovated again and again by business committees and business leaders. These core concerns triggered in forming global reports on Corporate Governance. Hence, the Organization for Economic Co-operation and Development (OECD) principles endorsed by (OECD) ministers was born in 1999 and since then with its sound financial system became an international benchmark for policy makers, investors, corporations and other stakeholders. The call for principles of corporate governance is not something new and alien to Islam. The Islamic financial system has thrived for centuries during the heyday of the Muslim civilization, but with the infiltration of modern conventional economy leads to misplace the Islamic civilization. And such a way Islamic economic developed as a social discipline in response to this environment. Although Islamic economy do perform mostly the same functions as conventional economy, there is always a distinct unique form of differences between both the principles implement. In fact, the primary feature of Islamic economy is to give just, honest, fair and balanced society as envisioned to Islamic ethical values and rules. (Ahmad, 2000, Mirakhor, 2000 and Warde, 2000), expressed that Islamic business is always characterized by ethical norms and social commitments, grounded on ethical and moral framework of the Shariah. (Asyraf, 2006) herewith underpinned nicely that these Shariah injunctions interweave Islamic financial transactions with genuine concern for ethically and socially responsible activities at the same time as prohibiting involvement in illegal activities or those which are detrimental to social and environmental well-being. Khalifa (2003) also describes Islamic economics as it is Godly, ethical, humanly, and moderate and balanced. Therefore, all forms of exploitation are prohibited in Islamic business system and should underpin with the ethical rules of Shariah. The main objectives of this study are to briefly discuss the current state of corporate governance practices at the conventional economy and to establish the measurement of good corporate governance at the functional level and how far this approach can ensure the relativity with the Islamic corporate governance. This study describes a radically different approach focusing the similarities and differences of conventional corporate governance from the Islamic perspective. The researcher referred the principles of corporate governance (OCED)—2004, for the purpose of this study. It is done so, since these principles were so sound that it was immediately adopted by many well profounded companies and organizations and soon became a benchmark for identification of good elements all over the world. Therefore, this paper is an attempt to bring a comparative position and to analyze the similarities and differentiations of the revised OECD principles and its annotations to the Islamic perspective. The remainder of the paper presents into six divided sections, the following section discusses the identification of corporate governance. The OECD principles are further analyzed in section three. Section 4 discusses the Islamic perspective of corporate governance and its comparison with OECD principles and the last section gives the conclusion of the study.