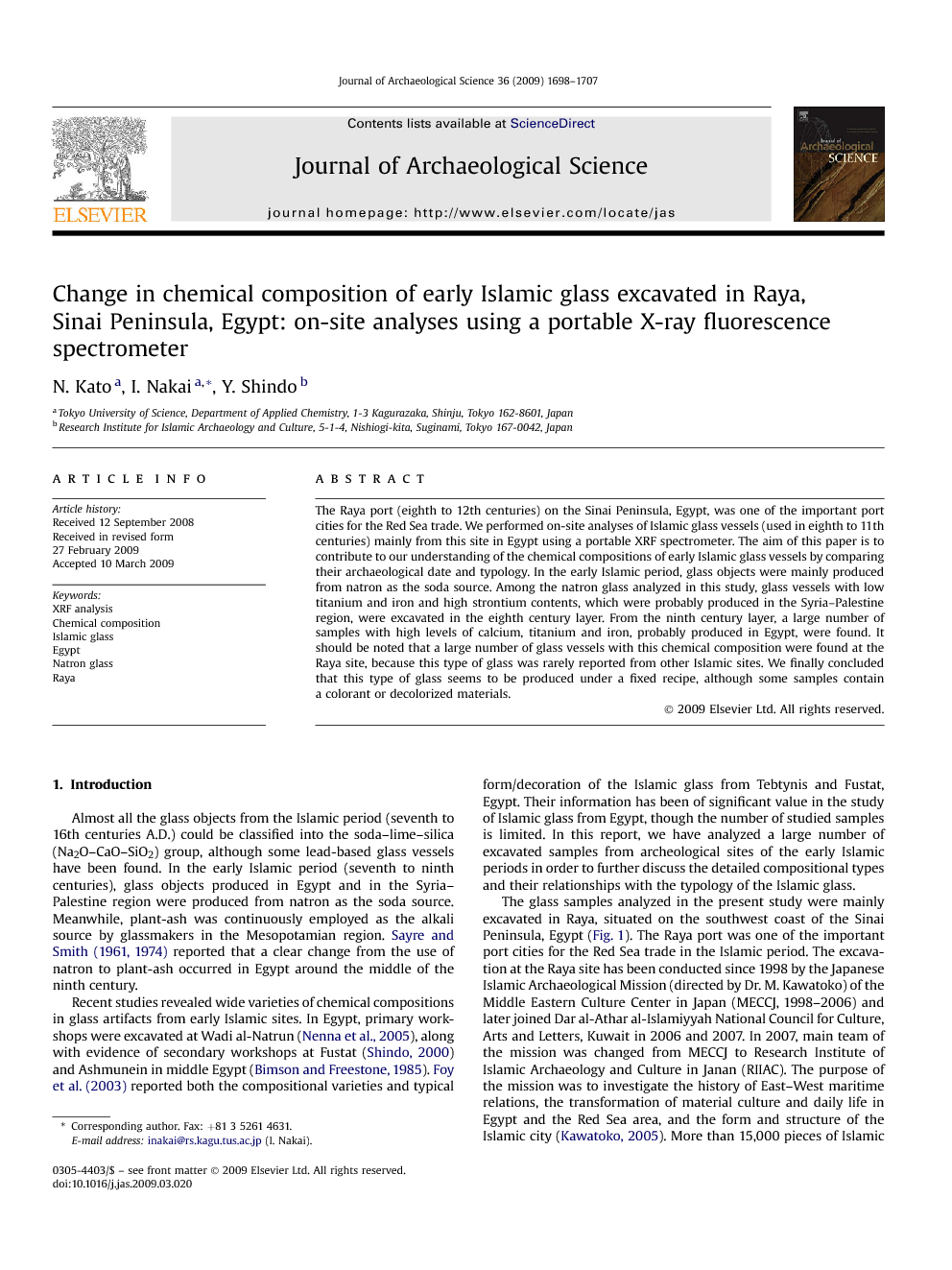 The Raya port (eighth to 12th centuries) on the Sinai Peninsula, Egypt, was one of the important port cities for the Red Sea trade. We performed on-site analyses of Islamic glass vessels (used in eighth to 11th centuries) mainly from this site in Egypt using a portable XRF spectrometer. The aim of this paper is to contribute to our understanding of the chemical compositions of early Islamic glass vessels by comparing their archaeological date and typology. In the early Islamic period, glass objects were mainly produced from natron as the soda source. Among the natron glass analyzed in this study, glass vessels with low titanium and iron and high strontium contents, which were probably produced in the Syria–Palestine region, were excavated in the eighth century layer. From the ninth century layer, a large number of samples with high levels of calcium, titanium and iron, probably produced in Egypt, were found. It should be noted that a large number of glass vessels with this chemical composition were found at the Raya site, because this type of glass was rarely reported from other Islamic sites. We finally concluded that this type of glass seems to be produced under a fixed recipe, although some samples contain a colorant or decolorized materials.

Almost all the glass objects from the Islamic period (seventh to 16th centuries A.D.) could be classified into the soda–lime–silica (Na2O–CaO–SiO2) group, although some lead-based glass vessels have been found. In the early Islamic period (seventh to ninth centuries), glass objects produced in Egypt and in the Syria–Palestine region were produced from natron as the soda source. Meanwhile, plant-ash was continuously employed as the alkali source by glassmakers in the Mesopotamian region. Sayre and Smith, 1961 and Sayre and Smith, 1974 reported that a clear change from the use of natron to plant-ash occurred in Egypt around the middle of the ninth century. Recent studies revealed wide varieties of chemical compositions in glass artifacts from early Islamic sites. In Egypt, primary workshops were excavated at Wadi al-Natrun (Nenna et al., 2005), along with evidence of secondary workshops at Fustat (Shindo, 2000) and Ashmunein in middle Egypt (Bimson and Freestone, 1985). Foy et al. (2003) reported both the compositional varieties and typical form/decoration of the Islamic glass from Tebtynis and Fustat, Egypt. Their information has been of significant value in the study of Islamic glass from Egypt, though the number of studied samples is limited. In this report, we have analyzed a large number of excavated samples from archeological sites of the early Islamic periods in order to further discuss the detailed compositional types and their relationships with the typology of the Islamic glass. The glass samples analyzed in the present study were mainly excavated in Raya, situated on the southwest coast of the Sinai Peninsula, Egypt (Fig. 1). The Raya port was one of the important port cities for the Red Sea trade in the Islamic period. The excavation at the Raya site has been conducted since 1998 by the Japanese Islamic Archaeological Mission (directed by Dr. M. Kawatoko) of the Middle Eastern Culture Center in Japan (MECCJ, 1998–2006) and later joined Dar al-Athar al-Islamiyyah National Council for Culture, Arts and Letters, Kuwait in 2006 and 2007. In 2007, main team of the mission was changed from MECCJ to Research Institute of Islamic Archaeology and Culture in Janan (RIIAC). The purpose of the mission was to investigate the history of East–West maritime relations, the transformation of material culture and daily life in Egypt and the Red Sea area, and the form and structure of the Islamic city (Kawatoko, 2005). More than 15,000 pieces of Islamic glass objects have been excavated from this site. The archaeological context of the excavated glass objects suggests that they were produced in the eighth to 11th centuries (Shindo, 2003), a time when radical changes in the chemical composition of the glass occurred. Glass objects investigated in this study were excavated from the eighth century Area VIII and Area XXVII (Shindo, 2005b and Shindo, 2007), and the ninth century glass finds in the Fort of the Raya site (Shindo, 2004). Although the archaeological date of the Fort is from the ninth to 11th centuries, the natron-based glass was mainly unearthed in the ninth century layer at the Fort. Glass objects excavated from the Monastery of Wadi al-Tur (from the sixth to 13th centuries) (Kawatoko, 1996), situated 15 km north of Raya, were also analyzed (Fig. 1). This monastery has been excavated by the South Sinai Archaeological Office of the Supreme Council of Antiquities of Egypt (SCAE) since 1984. A joint investigation with our Japanese Islamic Archaeological Mission was started in 1993. At this monastery, fragments of glass lamps and chalices of the Byzantine style were found together with other glass objects dated post 11th century. Both were found rarely at the Raya site and therefore included in our analysis. The analyses of the glass, glazed pottery, coins, etc., from the Raya and the Monastery of the Wadi al-Tur sites have been conducted at the mission's research facilities in al-Tur near the Raya site using a portable X-ray fluorescence (P-XRF) spectrometer since 2001 (Kato et al., 2005, Kato et al., 2007a, Kato et al., 2007b, Nakai et al., 2005 and Nakai et al., in press). The rationale behind using this technology (Nakai et al., 2005) is that it is strictly prohibited to take archaeological samples overseas from Egypt and destroy them for chemical analyses. The nondestructive on-site analyses of archaeological objects using this portable XRF spectrometer have been performed at North Saqqara in Egypt and Zadar in Croatia, etc., beside the Raya site. In 2006, a newly developed XRF for light element analysis, OURSTEX 100FA II-L, was used for the on-site analyses (Kato et al., 2007b and Tantrakarn et al., 2009). The aim of this study is to clarify the chemical composition of the early Islamic glass objects from the Raya site in order to better understand glass trading in the Islamic world. Especially, the results of the glass objects probably produced in Egypt in the ninth century, which have never been investigated in detail until now, may contribute to the understanding of the early Islamic glass in Egypt.

A large number of glass objects imported from various regions have been excavated in the Raya site, one of the important port cities for the Red Sea trade. Archaeological investigation of the glass objects from the Raya site has been continuously carried out every year (Shindo, 2003, Shindo, 2004, Shindo, 2005b and Shindo, 2007). The present study demonstrated that the chemical compositional data can provide additional important information used to interpret the archaeological findings. In this study, we focused on the chemical composition of the early Islamic glass objects. More than 110 early Islamic natron-based glass objects analyzed by a new XRF spectrometer developed for the analysis of light elements were divided into four compositional types. The number of N1 type vessels quantified in this report was only 25 because of their weathered surface condition. On the other hand, the N2-a2 type of glass objects with high contents of alumina (4.0 wt% on average) had a smooth surface. Among more than 500 samples of natron-based glass objects, which have been analyzed using the prototype XRF spectrometer since 2004, the N1 type objects account for about 30%, the N2-a1 and N2-a2 types for 5%, and the N2-b type for about 60%. In the eighth century, the majority of the glass compositional types were natron glass produced in the Syria–Palestine region (N1 type), although a small number of Egyptian natron glass objects with a low lime content (N2-a1 and N2-a2 types) were excavated in the Raya site. After the ninth century, it seems that a large number of natron glass vessels with high lime contents, probably produced in Egypt (N2-b type), were imported to Raya. It can be seen that the compositional differences between the glass from the Syria–Palestine region and those from Egypt are the titanium and iron oxide contents. In addition, it was found that the some decorated N2-b type vessels may have been produced using a colorant or decolorized material, such as cobalt or manganese. The Byzantine lamps and chalices excavated in the Monastery of Wadi al-Tur site belonged to the same compositional groupings established from the Raya glass. It enabled us to understand their production date, area, and their trade into the south Sinai. The advantage of the portable XRF is that we can analyze a large number of samples at an archeological site in cooperation with archaeologists, which allows us to obtain a much better understanding of the findings based on the relationships between the chemical composition and the archaeological typology. In the near future, we will report the chemical composition of plant-ash glass excavated at the Raya and al-Tur area in order to further discuss the Red Sea trade of glass in the ninth to 13th centuries.