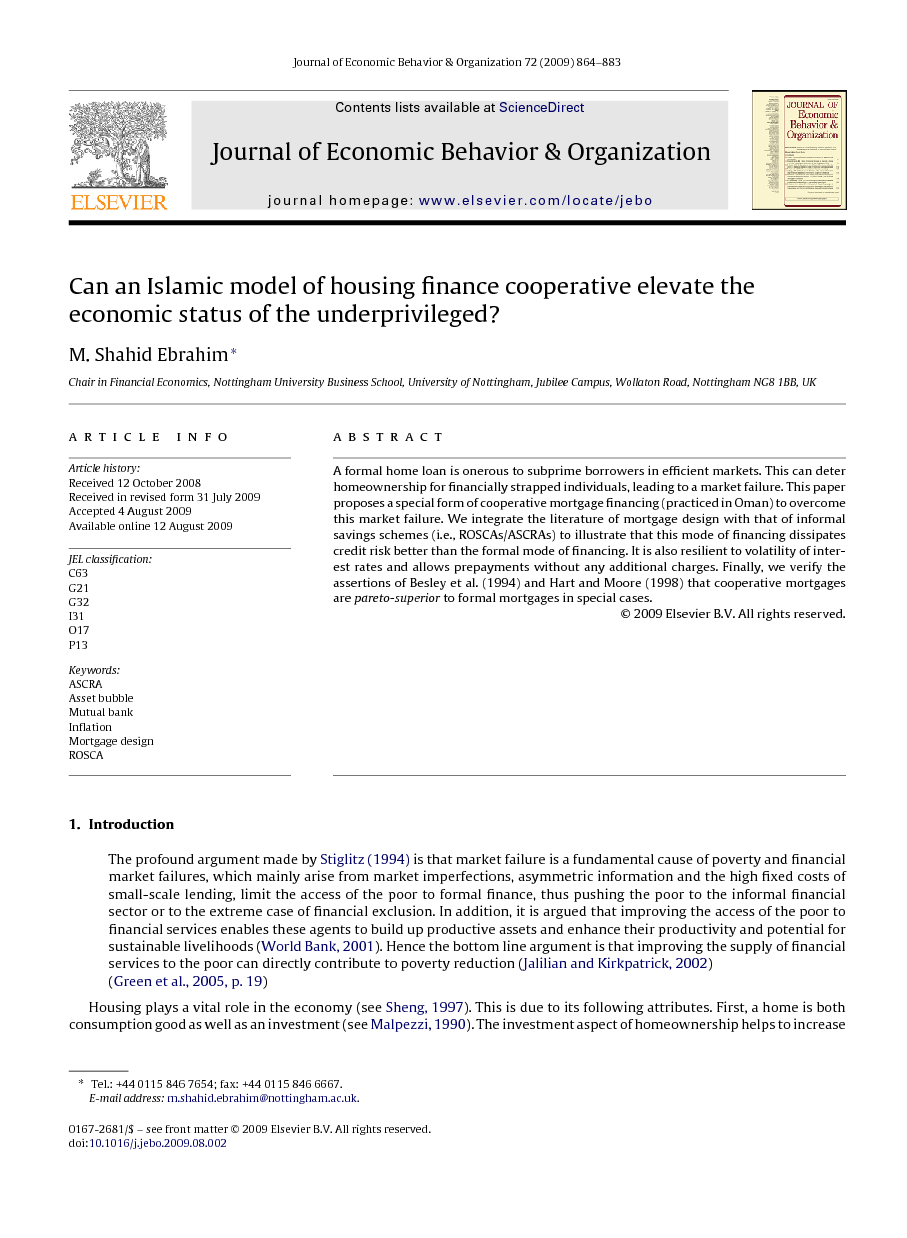 A formal home loan is onerous to subprime borrowers in efficient markets. This can deter homeownership for financially strapped individuals, leading to a market failure. This paper proposes a special form of cooperative mortgage financing (practiced in Oman) to overcome this market failure. We integrate the literature of mortgage design with that of informal savings schemes (i.e., ROSCAs/ASCRAs) to illustrate that this mode of financing dissipates credit risk better than the formal mode of financing. It is also resilient to volatility of interest rates and allows prepayments without any additional charges. Finally, we verify the assertions of Besley et al. (1994) and Hart and Moore (1998) that cooperative mortgages are pareto-superior to formal mortgages in special cases.

The formal housing finance system is onerous to the financially strapped individuals in an efficient capital market, as it prices the incremental risk of the subprime borrower. This has a capacity to cause a market failure, as the high cost of funding can deter homeownership. This paper proposes the establishment of a special circuit in the form of a cooperative to overcome this market failure, by integrating the two streams of the literature (comprising of mortgage design and informal saving schemes). Intuitively, we propose a system akin to the “barn-raising” one in nineteenth century frontier U.S., where the in-kind contribution of prospective homeowner offsets the cost of borrowing such that the net contractual interest rate is zero. This form of financing is a special case of ASCRA and is practiced in a limited way by clans in Oman to help their destitute clan members. It is consistent with the prognosis of King and Levine (1993) and Levine (1997), as it facilitates in mitigating risk and reducing transaction costs for the underprivileged masses. We implicitly assume that the cooperative has access to seed funding for its incorporation through either a charity or a mutual savings institution (such as a building society/credit union/mutual savings bank) or governmental agency or a non-governmental agency (NGO) or a supra national agency like the World Bank. Once it is established, it needs to be managed carefully for it to be self-sustaining.43 We assume the existence of an information architecture and optimally price mortgages (in the spirit of Baltensperger, 1978) to contrast the one made by the housing finance cooperative with that of a formal intermediary in the prime sector. This is accomplished in a more scientific way instead of using the ad hoc credit rationing constraints currently used by banks. Our efforts yield the following four key results. First, a cooperative home mortgage is allocatively more efficient than a formal prime sector mortgage, as the loan amount is marginally higher. This is despite the fact that both are subject to similar asset value constraints. However, a cooperative mortgage involves marginally lower total monthly payments with less tenure. This is also in contrast to the fact that both are subject to similar income constraints. A cooperative mortgage is thus less onerous than a formal mortgage, as its linear profile necessitates principal payments in contrast to a formal mortgage which necessitates principal plus interest. Second, the linear lien profile of a cooperative home mortgage also makes it less prone to defaults in contrast to the concave profile of a formal mortgage. This stems from the fact that a cooperative mortgage builds equity faster for the homeowner, leaving a larger safety net for the financier. Thus, we conclude that a cooperative mortgage is a better alternative than a formal mortgage, as it has the potential of reducing macroeconomic volatility in accordance with the prognosis of Sheng (1997) and Renaud (2009). Third, a housing finance cooperative performs better than its formal counterpart during periods of volatile interest rates (stemming from changes in inflationary expectations). This is attributed to the endogenous use of leverage, where the volatility in interest rates marginally impacts on the LTV and the tenure instead of pricing out the prospective homeowner due to the increase in affordability (in case of the formal mortgage). Finally, the overall efficiency of a cooperative vis-à-vis a formal prime sector mortgage is contingent on the underlying characteristics of a home, that of the borrower and its underwriting standards. For some values of these parameters, a cooperative constitutes a special case reported in Besley et al. (1994) and Hart and Moore (1998), which is pareto-superior to the formal mortgage. However, for other values of the above parameters, a cooperative is pareto-inferior to a formal mortgage. It should be noted that our analysis does not incorporate the relatively low administrative, default and transaction costs embedded in the cooperative one in contrast to the subprime one (see Buijs, 1998 and Smets, 2000).44 Furthermore, there is no prepayment cost in a cooperative mortgage as opposed to a formal mortgage, where it results in a higher interest rate or a higher initiation fee (see Hall, 1985). If we were to incorporate these lower costs, a cooperative would still dominate in terms of its efficiency.45 This competitive advantage of cooperatives (in the form of credit unions) in the U.S. (despite their handicap described below) has subjected them to intense pressure from the banking industry, which threatens to contain its growth through legal and political means (see Wysocki, 2006). Nonetheless, a diligent manager of the cooperative should underwrite a portfolio which internally generates a capital surplus crucial for sustaining its growth. This implies: (i) catering to the disadvantaged (with low income) who aspire to purchase a home (with low initial value and medium to high risk), and (ii) using the following underwriting constraints: medium income multiplier and high confidence level. The competitive advantages of the housing finance cooperative (as elaborated above) outweigh its disadvantages ensuing from its (i) illiquidity (as cooperatives are forced to hold the mortgages until maturity, in contrast to the formal intermediaries, who can securitize them in the secondary markets), and (ii) inability to raise funds quickly due to inordinate demand (as charity funded cooperatives do not have the same ability as formal intermediaries in raising funds and are compelled to do so by appealing to their constituents, and meticulously managing its portfolio). Nonetheless, a cooperative serves as an exemplary special circuit that does not depend on government subsidies, and manages available resources more efficiently with reduced risk (in contrast to its formal counterpart). We therefore recommend it to be adopted globally to help the disadvantaged gain from its economic benefits (see Renaud, 2009). The ensuing benefit of homeownership will help in elevating the economic status of the underprivileged, fostering investment in local amenities and social capital, thus enhancing the quality of the community and stimulating economic development (see Malpezzi, 1990, Buckley, 1994, DiPasquale and Glaeser, 1999 and Haurin et al., 2002).