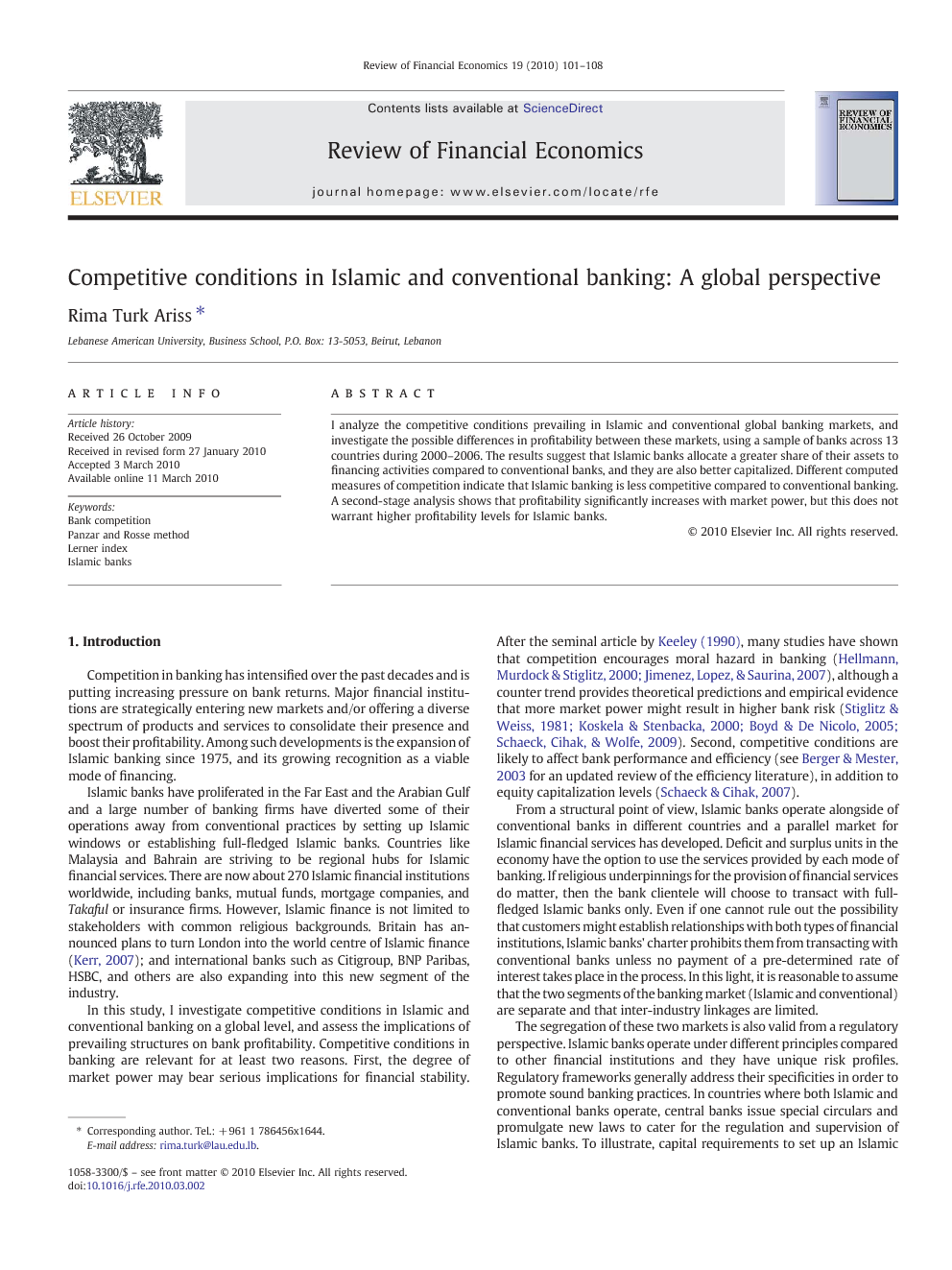 I analyze the competitive conditions prevailing in Islamic and conventional global banking markets, and investigate the possible differences in profitability between these markets, using a sample of banks across 13 countries during 2000–2006. The results suggest that Islamic banks allocate a greater share of their assets to financing activities compared to conventional banks, and they are also better capitalized. Different computed measures of competition indicate that Islamic banking is less competitive compared to conventional banking. A second-stage analysis shows that profitability significantly increases with market power, but this does not warrant higher profitability levels for Islamic banks.

Over the past three decades, the Islamic banking industry has developed into a viable mode of finance. The number of institutions that operate along the Islamic jurisprudence has multiplied and major international players like Citigroup, HSBC, and others have recognized the growth potential of this new segment of the industry, developing Shari'a-compliant products, windows, or subsidiaries. In this paper, I analyze the banking structures of both Islamic and conventional global markets and investigate possible differences in profitability among the two segments of the industry. Over the period 2000–2006, I build a sample of Islamic banks across 13 different countries and retrieve data on conventional banks that operate in the same countries. Univariate statistics and tests of means provide broad evidence on differences in asset and portfolio composition across Islamic and conventional banks. First, Islamic banks appear to allocate a significantly greater share of their assets to financing or loans compared to conventional banks, implying a greater exposure to credit risk. In turn, Islamic banks balance the higher portfolio risk with significantly lower financial risk through higher capitalization levels. However, there are no consistently significant differences in profitability levels across Islamic and conventional banks. The examination of competitive conditions using different proxies of competition indicates that the global Islamic banking market exhibits more concentration and less competition compared to the conventional banking segment. The multivariate analysis shows that lower bank competition is significantly and positively related to higher profitability levels, even on a risk-adjusted basis, after controlling for bank and country differences. The findings confirm the reasoning that banks have a strong incentive to engage in market segments where the degree of competition is low in order to achieve higher rates of return. However, Islamic banks are not significantly more profitable compared to their peers. While the Islamic banking market is attracting a lot of attention, there is no evidence of significant higher returns for this infant industry. Notwithstanding the religious underpinnings of conducting Shari'a-compliant financial transactions, it could be that Islamic banks are proliferating in anticipation of earning future expected returns that are higher compared to their peers' expectations. More importantly, the findings raise the question of why Western banks are paying increasing attention to the Islamic mode of financing and attempting to infiltrate this new segment of the industry. My explanation is that many foreign-owned banks have a follow-the-customer strategy, even if that means earning losses in a particular market. In the case of the Gulf Cooperation Countries, the region has witnessed an unprecedented growth over the last decade, and the petrodollar boom has attracted investors from all over the world. Therefore, international banks participate in the Islamic banking segment to better serve their customers in this region. On another front, Western banks have benefitted from their expansion in this new line of business. Shari'a-compliant finance prohibits investing in complex financial derivatives, following the rule that “one cannot sell what one does not own”, and Islamic banks have as a result shown greater resilience to the recent 2007 global financial crisis. By tying up bank resources in financing real assets rather than investing in financial derivatives, Western banks that engaged in Islamic finance might have diversified their portfolio on a global basis and limited their exposure to systemic shocks similar to those experienced after the fall of Lehman Brothers. Finally, it is left for future research to examine the implications of a higher degree of market power prevailing in the Islamic banking industry on overall stability and whether Islamic banks have a role to play in contributing to overall financial stability.