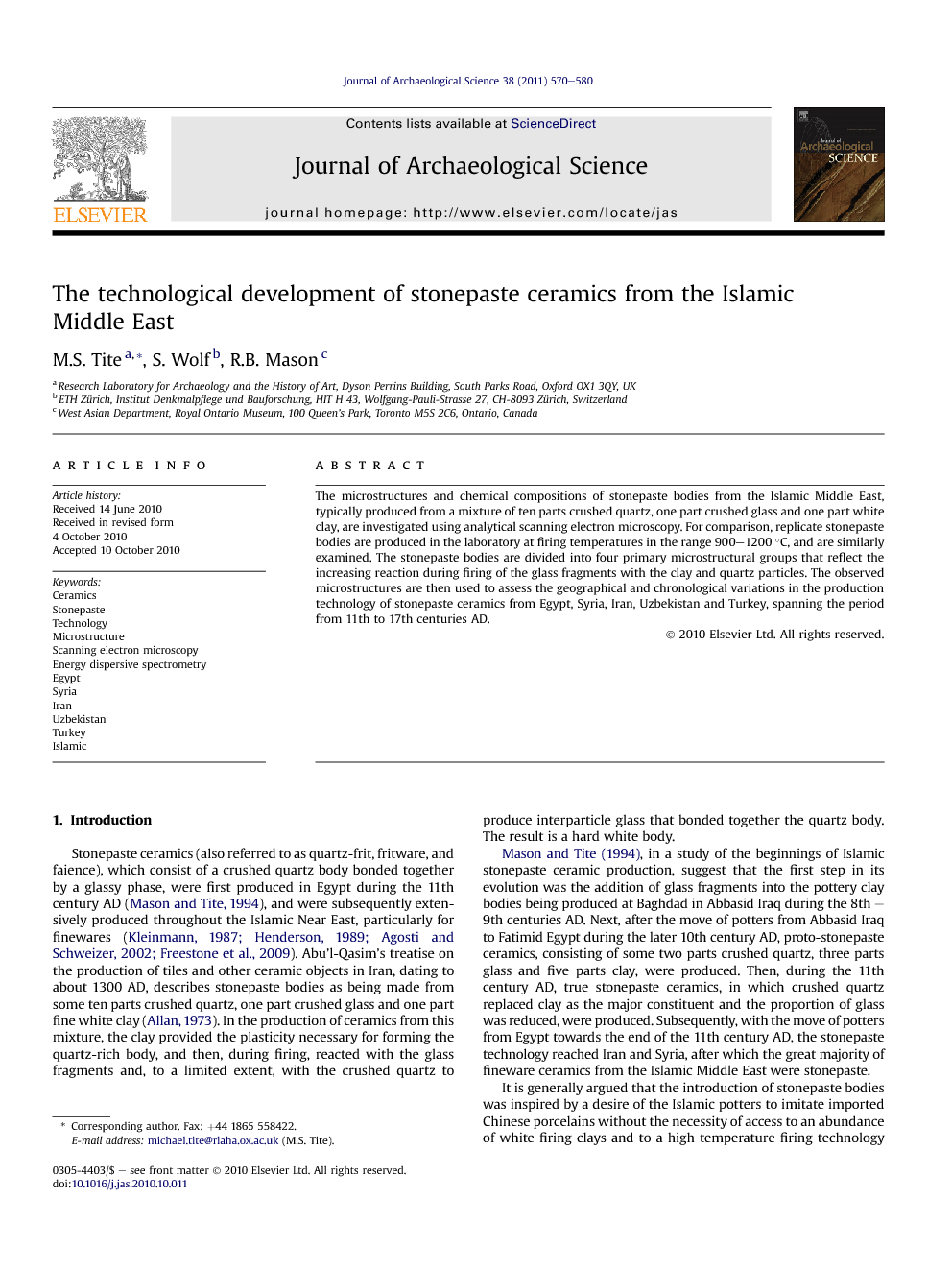 The microstructures and chemical compositions of stonepaste bodies from the Islamic Middle East, typically produced from a mixture of ten parts crushed quartz, one part crushed glass and one part white clay, are investigated using analytical scanning electron microscopy. For comparison, replicate stonepaste bodies are produced in the laboratory at firing temperatures in the range 900–1200 °C, and are similarly examined. The stonepaste bodies are divided into four primary microstructural groups that reflect the increasing reaction during firing of the glass fragments with the clay and quartz particles. The observed microstructures are then used to assess the geographical and chronological variations in the production technology of stonepaste ceramics from Egypt, Syria, Iran, Uzbekistan and Turkey, spanning the period from 11th to 17th centuries AD.

Stonepaste ceramics (also referred to as quartz-frit, fritware, and faience), which consist of a crushed quartz body bonded together by a glassy phase, were first produced in Egypt during the 11th century AD (Mason and Tite, 1994), and were subsequently extensively produced throughout the Islamic Near East, particularly for finewares (Kleinmann, 1987, Henderson, 1989, Agosti and Schweizer, 2002 and Freestone et al., 2009). Abu’l-Qasim’s treatise on the production of tiles and other ceramic objects in Iran, dating to about 1300 AD, describes stonepaste bodies as being made from some ten parts crushed quartz, one part crushed glass and one part fine white clay (Allan, 1973). In the production of ceramics from this mixture, the clay provided the plasticity necessary for forming the quartz-rich body, and then, during firing, reacted with the glass fragments and, to a limited extent, with the crushed quartz to produce interparticle glass that bonded together the quartz body. The result is a hard white body. Mason and Tite (1994), in a study of the beginnings of Islamic stonepaste ceramic production, suggest that the first step in its evolution was the addition of glass fragments into the pottery clay bodies being produced at Baghdad in Abbasid Iraq during the 8th – 9th centuries AD. Next, after the move of potters from Abbasid Iraq to Fatimid Egypt during the later 10th century AD, proto-stonepaste ceramics, consisting of some two parts crushed quartz, three parts glass and five parts clay, were produced. Then, during the 11th century AD, true stonepaste ceramics, in which crushed quartz replaced clay as the major constituent and the proportion of glass was reduced, were produced. Subsequently, with the move of potters from Egypt towards the end of the 11th century AD, the stonepaste technology reached Iran and Syria, after which the great majority of fineware ceramics from the Islamic Middle East were stonepaste. It is generally argued that the introduction of stonepaste bodies was inspired by a desire of the Islamic potters to imitate imported Chinese porcelains without the necessity of access to an abundance of white firing clays and to a high temperature firing technology (Mason and Tite, 1994 and Tite and Wood, 2005). The fact that the monochrome incised wares produced in Fatimid Egypt in the 11th century AD are clearly imitations of qingbai porcelains supports this hypothesis. However, in the production of lustre ware in Egypt at this period, stonepaste bodies were used in combination with tin-opacified glazes which themselves provided a white background for the lustre decoration. Therefore, the predominance of stonepaste over clay bodies in the production of fineware ceramics from the Islamic Middle East probably also, in part, reflects the fact that quartz, as the major component of stonepaste bodies, was the same as far as the potter was concerned wherever it was found. Thus, when potters were moving from one area to another, quartz was a more “predictable” material than the local clays whose properties would have had to have been carefully assessed before use if they were to form the bulk of the body. In contrast, when clay made up only some 10 wt% of the body, there would have been greater flexibility in what were acceptable properties. The aim of the present paper is to build on the earlier study of the beginnings of stonepaste production in Fatimid Egypt (Mason and Tite, 1994). The development of the microstructures of replicate stonepaste bodies with increasing firing temperature is first investigated by the examination of polished sections in a scanning electron microscope (SEM). On the basis of these results, the different microstructures observed in a range of stonepaste ceramics from across the Islamic Middle East, spanning the period from 11th to 17th centuries AD, are classified in terms of the surviving evidence of the original glass fragments and the extent of interparticle glass. These microstructures are then used to assess chronological and geographical variations in the production technology of stonepaste ceramics across the Islamic Middle East.

In summary, the Fatimid and Seljuk periods (i.e., 11th −12th centuries AD) saw the development of stonepaste bodies from the proto-stonepaste in which clay and glass predominated over quartz (Mason and Tite, 1994), through the coarsewares produced in Egypt, to the finewares produced in Syria and Iran. This last group includes the lustre wares from Kashan in Iran which are distinctive both because of their more or less continuous glass matrix, and the fact that the bodies contain a high proportion of chert instead of crystalline quartz. Because of their closely packed interconnecting quartz networks, the Syrian and Iranian finewares tend to be harder that the Egyptian coarsewares with their more open structures. Subsequent to the 12th century AD, stoneware bodies were used in the production of both coarsewares and finewares: the former being produced in Mamluk Egypt and Syria, Timurid Nishapur and Samarkand, and Turcoman Tabriz; and the latter in Timurid Samarkand, Safavid Iran and Ottoman Turkey. Among the coarsewares, the Turcoman ceramics from Tabriz are distinctive both in the use of acid volcanic rock fragments instead of crushed quartz, and in the limited reaction between the glass fragments and the surrounding quartz particles and clay, and thus, the lower firing temperatures employed in their production. Among the finewares, the Iznik ceramics from Ottoman Turkey are unique among stoneware ceramics in a number of respects. First, the glass fragments added to the bodies contained significant amounts of lead oxide, a component that, with the exception of the low fired Turcoman ceramics from Tabriz, was last used some 300 years earlier in Fatimid Egypt. Second, no other Islamic glazes containing significant amounts of tin oxide with the majority in solution have been identified. As discussed by Paynter et al. (2004), the high solubility of the tin oxide was due to the high purity of Iznik glazes (i.e., low potash, lime, magnesia and alumina contents) which, in turn, was probably the result of using a purified desert or coastal plant ash as the source of the alkali. Thus, as discussed by Tite (1989), there were no immediate antecedents to Iznik ceramics, and instead, the Iznik potters successfully adapted existing Islamic ceramic technologies in order to meet the demand of the Ottoman court for pottery that replicated the whiteness and resonancy of the coveted, imported Chinese porcelain. In the future, in order to estimate the firing temperatures employed in the production of stonepaste ceramics, it will be necessary to extend our preliminary replication experiments. In particular, both alkali and lead-alkali glass fragments should also be used in the stonepaste body mixtures, the grain size of the glass fragments should be reduced to less than 50 μm or 100 μm, and the drying times for the moistened stonepaste bodies and the overall firing times should be increased.