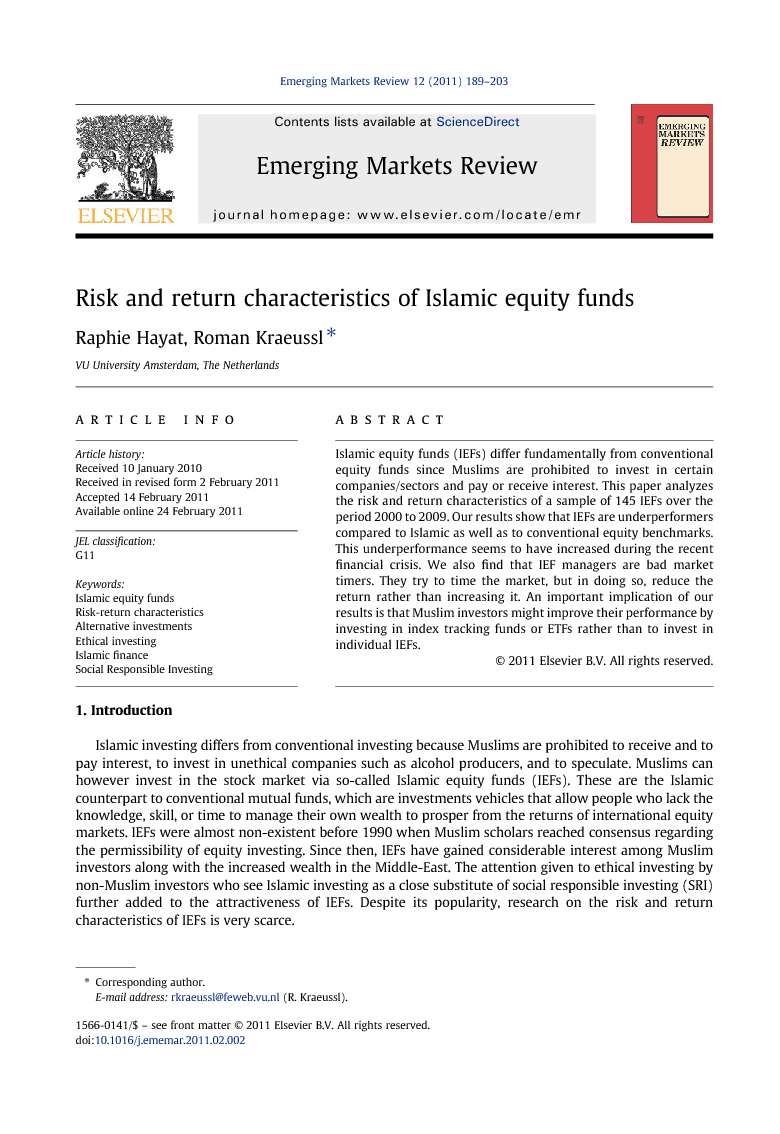 Islamic equity funds (IEFs) differ fundamentally from conventional equity funds since Muslims are prohibited to invest in certain companies/sectors and pay or receive interest. This paper analyzes the risk and return characteristics of a sample of 145 IEFs over the period 2000 to 2009. Our results show that IEFs are underperformers compared to Islamic as well as to conventional equity benchmarks. This underperformance seems to have increased during the recent financial crisis. We also find that IEF managers are bad market timers. They try to time the market, but in doing so, reduce the return rather than increasing it. An important implication of our results is that Muslim investors might improve their performance by investing in index tracking funds or ETFs rather than to invest in individual IEFs.

Islamic investing differs from conventional investing because Muslims are prohibited to receive and to pay interest, to invest in unethical companies such as alcohol producers, and to speculate. Muslims can however invest in the stock market via so-called Islamic equity funds (IEFs). These are the Islamic counterpart to conventional mutual funds, which are investments vehicles that allow people who lack the knowledge, skill, or time to manage their own wealth to prosper from the returns of international equity markets. IEFs were almost non-existent before 1990 when Muslim scholars reached consensus regarding the permissibility of equity investing. Since then, IEFs have gained considerable interest among Muslim investors along with the increased wealth in the Middle-East. The attention given to ethical investing by non-Muslim investors who see Islamic investing as a close substitute of social responsible investing (SRI) further added to the attractiveness of IEFs. Despite its popularity, research on the risk and return characteristics of IEFs is very scarce. Annuar et al. (1997) examine the performance of 31 Malaysian mutual funds over the period 1990 to 1995. Many of these funds are Islamic and thus provide a proxy for Islamic fund performance. They find empirical evidence that these Malaysian funds did outperform the Kuala Lumpur Composite Index (KLCI) benchmark, but that the fund managers were rather poor at timing the market. Ahmad (2001) presents a very rough guide to IEF performance by evaluating 13 IEFs individually. Although the author states that some Islamic funds outperform benchmarks like the MSCI, his analysis lacks a thorough statistical analysis. Zaher and Hassan (2001) provide an overview of the returns of 37 IEFs for the period 1997–1999 and infer that ethical investments offer a good return compared to conventional mutual funds. However, they also do not back up their claims with thorough statistical analysis. The paper closest to our work is the research by Abdullah et al. (2007). They analyze 65 Malaysian unit trusts including 14 Islamic and 51 conventional funds and conclude that both types of funds slightly underperformed the KLCI benchmark. When taking risk into account, they find that their sample of IEFs performs better than conventional funds during bear markets, while during bull markets it is the other way around. However, the major shortcoming of all previous research on the performance of IEFs is that it either entails only Malaysian funds or is not analyzing the risk-return characteristics in a rigorous manner. As it is an emerging market, the focus on Malaysia is understandable. Emerging markets still continue to provide return enhancement as well as risk-reduction to developed market portfolios (Buchanan et al., 2011). However, we go beyond the focus on Malaysia and analyze almost all existing IEFs. In addition, this paper contributes to the literature on Islamic finance in numerous ways. First, we give a concise overview on the nature of Islamic investing by discussing the main opportunities and challenges. Second, we analyze in a thorough empirical study the performance and risk-return characteristics of 145 IEFs over the period January 2000 to February 2009. As such, we are also able to investigate the impact of the recent financial crisis of 2008/09 on the systematic risk of IEFs during down markets. We hypothesize that loss-averse investors prefer stocks that entail lower systematic risk during downswings and thus require less return. As such, we follow the seminal work by Ang et al. (2006) and explicitly specify a downside risk component. We divide our sample of IEFs into five categories based on their geographical focus, namely funds invested (i) globally, (ii) only in the Malaysian market, (iii) Asia-Pacific, (iv) Europe and the Middle-East,1 and (v) North America. To analyze the risk and return characteristics of IEFs we use different benchmarks per region (Bauer et al., 2005) and evaluate their performance against Islamic as well as conventional equity indices. We estimate the risk-adjusted performance (alpha) and systematic risk (beta) for each IEF using Jensen's (1968) version of the capital asset pricing model (CAPM). We find that IEFs on average have underperformed their Islamic and conventional benchmarks over the sample period of 2000–2009. After controlling for fund size and HAC standard errors our findings remain robust. In order to analyze the market timing ability of IEF's fund managers we employ the Treynor and Mazuy (1966) standard regression approach as well as the non-parametric method by Jiang (2003). We find that IEFs do engage in market timing and that IEF managers significantly miss-time the market. IEFs have been characterized in the Islamic finance literature as outperformers during bear market conditions (e.g., Abdullah et al., 2007). We test this proposition during the recent financial market crash of 2008–2009 and find that, on the contrary, IEFs significantly underperformed both their Islamic and conventional benchmarks during these turbulent times. Moreover, the underperformance is larger during this bear market than during the whole sample period. In a final step, we investigate the downside risk characteristics of IEFs (Ang et al., 2006). As such, we estimate the sensitivity of IEFs to the market, while conditioning for negative market excess returns. Our results indicate that IEFs have a slightly larger exposure to the market during downswings although not significantly so. The remainder of this paper is organized as follows. Section 2 describes the basic principles of Islamic finance and provides a short overview on the IEF industry. Section 3 presents our sample of IEFs and some descriptive statistics. Section 4 discusses our empirical findings. We first present the CAPM regression results; then we analyze the market timing ability of IEF managers, before we explicitly investigate the performance during financial market turmoil and the role downside risk might play in explaining the overall weak performance of IEFs. Section 5 provides our conclusions.

Islamic equity funds (IEFs) are a rather special type of investment vehicles. They have to pass a number of ethical and financial criteria before being halal (eligible according to Islam law). The IEF industry has shown stellar growth in the past decade but up to now has not been adequately analyzed in the academic literature. In this paper, we answer the critical question how well IEFs have performed over the last couple of years. We use a variety of techniques to attain a cross-section of estimated coefficients for systematic risk (beta), risk-adjusted return (alpha), market timing (gamma and theta), and downside risk (relative beta) using excess returns of 145 open-ended IEFs over the period 2000 to 2009. Our results indicate that on average IEFs substantially underperform both their Islamic and conventional benchmarks. This is even before considering management fees. We find that globally invested IEFs have the worst performance, while IEFs invested locally do slightly better. During the recent financial crisis of 2008/09, this underperformance has further increased. This finding is in sharp contrast with previous research indicating that IEFs perform better during bear than bull markets (Abdullah et al., 2007). We also use a parametric as well as a non-parametric approach to test for market timing and find that IEFs are poor market timers. We subject our results to numerous robustness tests and find that our conclusions hold when weighting our coefficients with standard errors and fund size. We also explicitly analyze downside risk as a potential explanation for the inferior performance but find that IEFs do not possess any significant downside risk. Moreover, one should note that next to being relative underperformers, IEFs possess some specific risks that are usually not present in conventional investments. These risks include: changing sharia (Islamic law) rules, the lack of a sufficient track record, high exposure to companies that might be sub-optimally leveraged, and companies with low working capital. These risks should be taken into account when assessing IEFs as an investment alternative. Overall, it seems that IEF managers have a long way to go, before offering Muslims an investment proposition that is attractive in terms of risk and return. Even though previous research indicates that Islamic indices do not significantly underperform conventional indices (e.g. Albaity and Ahmad, 2008), we find that IEFs in fact do so in many cases. A major implication here is that Muslim investors might be better off buying Islamic index trackers or Islamic exchange traded funds (ETFs) rather than invest through IEFs.