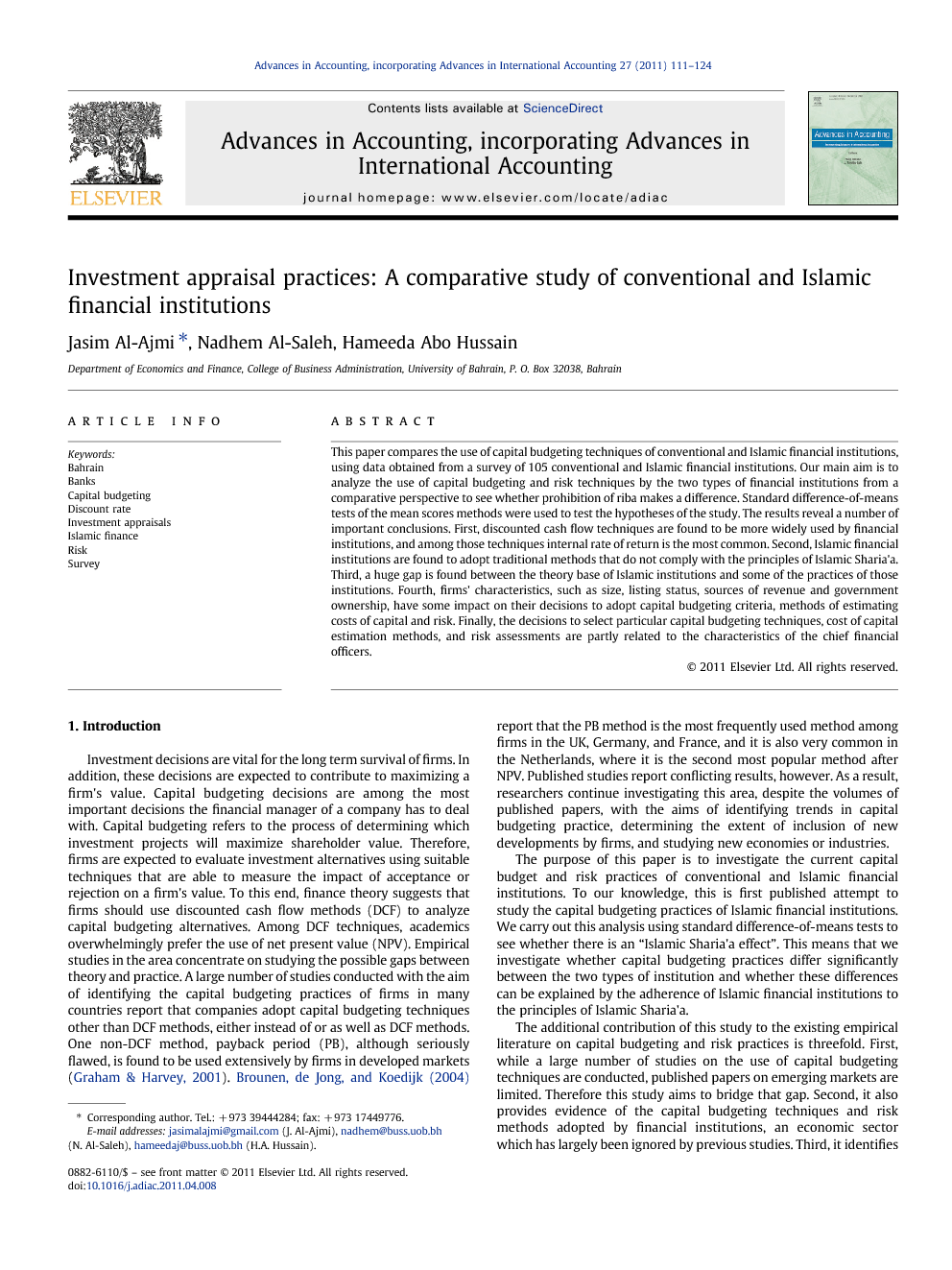 Investment decisions are vital for the long term survival of firms. In addition, these decisions are expected to contribute to maximizing a firm's value. Capital budgeting decisions are among the most important decisions the financial manager of a company has to deal with. Capital budgeting refers to the process of determining which investment projects will maximize shareholder value. Therefore, firms are expected to evaluate investment alternatives using suitable techniques that are able to measure the impact of acceptance or rejection on a firm's value. To this end, finance theory suggests that firms should use discounted cash flow methods (DCF) to analyze capital budgeting alternatives. Among DCF techniques, academics overwhelmingly prefer the use of net present value (NPV). Empirical studies in the area concentrate on studying the possible gaps between theory and practice. A large number of studies conducted with the aim of identifying the capital budgeting practices of firms in many countries report that companies adopt capital budgeting techniques other than DCF methods, either instead of or as well as DCF methods. One non-DCF method, payback period (PB), although seriously flawed, is found to be used extensively by firms in developed markets (Graham & Harvey, 2001). Brounen, de Jong, and Koedijk (2004) report that the PB method is the most frequently used method among firms in the UK, Germany, and France, and it is also very common in the Netherlands, where it is the second most popular method after NPV. Published studies report conflicting results, however. As a result, researchers continue investigating this area, despite the volumes of published papers, with the aims of identifying trends in capital budgeting practice, determining the extent of inclusion of new developments by firms, and studying new economies or industries. The purpose of this paper is to investigate the current capital budget and risk practices of conventional and Islamic financial institutions. To our knowledge, this is first published attempt to study the capital budgeting practices of Islamic financial institutions. We carry out this analysis using standard difference-of-means tests to see whether there is an “Islamic Sharia'a effect”. This means that we investigate whether capital budgeting practices differ significantly between the two types of institution and whether these differences can be explained by the adherence of Islamic financial institutions to the principles of Islamic Sharia'a. The additional contribution of this study to the existing empirical literature on capital budgeting and risk practices is threefold. First, while a large number of studies on the use of capital budgeting techniques are conducted, published papers on emerging markets are limited. Therefore this study aims to bridge that gap. Second, it also provides evidence of the capital budgeting techniques and risk methods adopted by financial institutions, an economic sector which has largely been ignored by previous studies. Third, it identifies the capital budgeting techniques adopted by Islamic financial institutions that adhere to the requirements of Islamic Sharia'a. Among the most important requirements is the prohibition of riba (interest), as Islam prohibits paying or receiving interest.1 The use of DCF methods, despite their superiority to other techniques, is not fully compliant with the requirements of Islamic Sharia'a (El-Abji, 1985).

This paper reports a study on the capital budgeting evaluation techniques and risk estimation methods used by financial institutions in Bahrain. The purpose of this study was to determine the present application of quantitative capital budgeting methods, cost of capital and cash flow estimation, and risk analysis. The results of the paper are based on a survey of 66 conventional institutions and 39 institutions that follow Islamic Sharia'a principles in Bahrain. We carried out the analysis using standard difference-of-means tests to test whether or not capital budgeting practices differ between conventional and Islamic institutions. Furthermore, the paper also investigated the effect of characteristics of firms and respondents on the investment appraisal practices of the institutions. Our survey shows that the influence of mainstream financial economic thinking on Bahraini practitioners is as widespread as it is in developed economies in general, and the US in particular. DCF methods are found to be widely used by the surveyed institutions. Among the most popular method is IRR, whereas NPV, while popular among academics, came second. However, while NPV is the most popular method among conventional institutions, IRR is the most popular method among Islamic institutions. Islamic institutions are found to adopt traditional methods of measuring the cost of equity, such as CAPM and estimation of discount rates for project evaluation. These findings, although they are approved by the Sharia'a advisors and jurists, contradict Islamic Sharia'a as interpreted by a number of Islamic economists, whose views are reported in Section 2.2 above. The discrepancy between theory (Islamic Sharia'a) and practice by Islamic institutions has serious implications, because it brings into question the validity of their operations and their compliance with Islamic Sharia'a. Such difficulties will make them similar to conventional institutions in areas where they are expected to be different, and will lead to an increased risk to their reputation. Extension of this research could be performed by 1) studying the practices of Islamic banks in different markets to determine the robustness of the reported results, 2) investigating the impact of the gap between the theory and practice of Islamic institutions on their reputations and their ability to increase their market share, and 3) investigating the value effects of using different capital budgeting techniques.