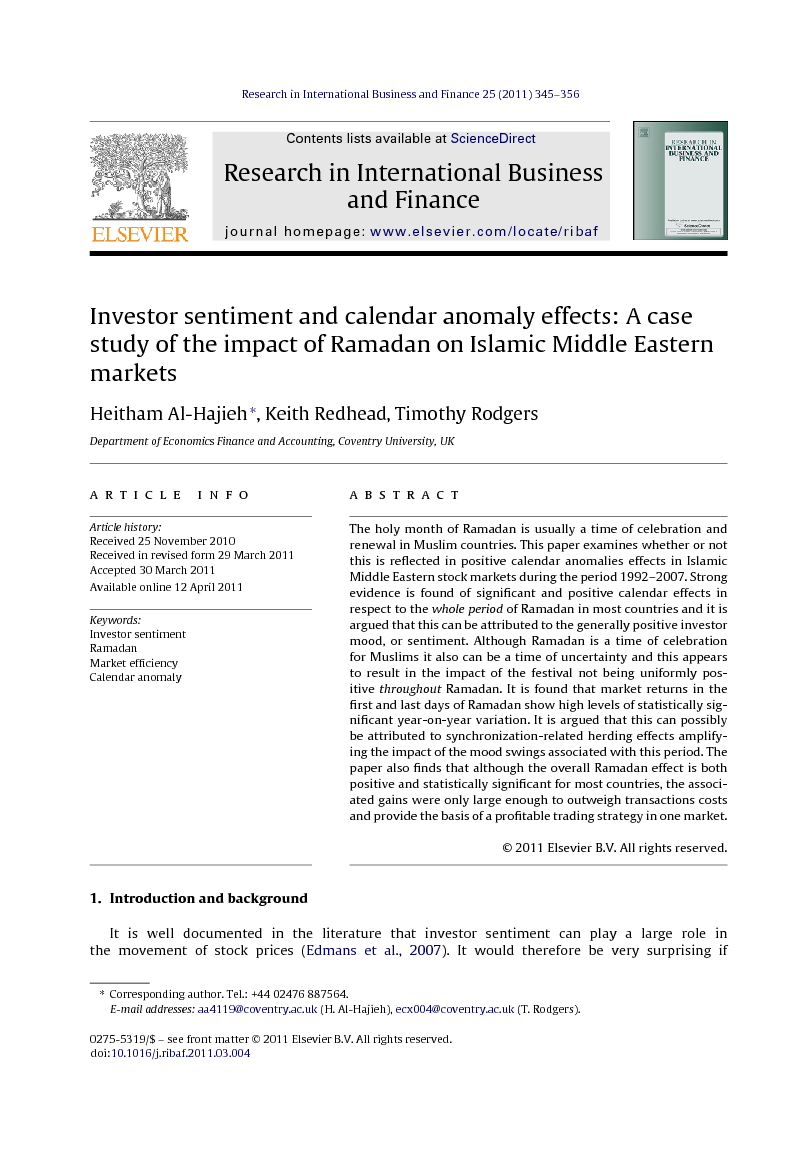 The holy month of Ramadan is usually a time of celebration and renewal in Muslim countries. This paper examines whether or not this is reflected in positive calendar anomalies effects in Islamic Middle Eastern stock markets during the period 1992–2007. Strong evidence is found of significant and positive calendar effects in respect to the whole period of Ramadan in most countries and it is argued that this can be attributed to the generally positive investor mood, or sentiment. Although Ramadan is a time of celebration for Muslims it also can be a time of uncertainty and this appears to result in the impact of the festival not being uniformly positive throughout Ramadan. It is found that market returns in the first and last days of Ramadan show high levels of statistically significant year-on-year variation. It is argued that this can possibly be attributed to synchronization-related herding effects amplifying the impact of the mood swings associated with this period. The paper also finds that although the overall Ramadan effect is both positive and statistically significant for most countries, the associated gains were only large enough to outweigh transactions costs and provide the basis of a profitable trading strategy in one market.

It is well documented in the literature that investor sentiment can play a large role in the movement of stock prices (Edmans et al., 2007). It would therefore be very surprising if changes in the general mood of the population did not have a significant impact on stock markets in Muslim countries. Social mood has been identified in the literature as a potentially significant factor in financial trends (Elliot and Echols, 1976) given that it reflects the combined level of optimism or pessimism in society at a given time. This can potentially lead to herding within these markets when investors are faced with a relatively uniform set of stimuli that impact on their decision making (Prechter, 1985 and Prechter, 1999). The holy month of Ramadan can be identified as potentially creating such an investment environment in Muslim countries. The fast of Ramadan is one of the five pillars of Islam, and it is one of the greatest of the marks and observances of Islam. In addition to fasting during the month of Ramadan, Muslims are encouraged to read the entire Qur’an and doing special prayers, called Tarawih, which are held in the mosques every night of the month. Qur’an (Muslim holy book) described Ramadan as “better than a thousand months” (Surah al-Qadr: 3). Muslim's belief that a blessed month of Ramadan will generate something valuable for both an individual and for society. Muslims believed through good actions, they get rewarded twice than they normally can achieve. During Ramadan, Muslims ask forgiveness for past sins, pray for guidance and help in refraining from everyday evils, and try to purify themselves through self-restraint and good deeds. Eid ul-Fitr is a Muslim holiday that marks the end of Ramadan. Eid is an Arabic word meaning “festivity”, whilst Fitr means “to break-fast”; and so the holiday symbolizes the breaking of the fasting period. Eid ul-Fitr lasts for three days of celebration. It falls on the first day of Shawwal, the month which follows Ramadan in the Islamic calendar. It is a time to give in charity to those in need, and celebrate with family and friends the completion of a month of blessings and joy. During Ramadan Muslims can experience a whole series of emotions. The process of fasting can be of particular significance here. Fasting is meant to teach the person patience, sacrifice and humility, but it also enhances the senses and emotion. Muslims also ask forgiveness for past sins, pray for guidance and help in refraining from everyday evils, and try to purify themselves through self-restraint and good deeds. According to Islamic religion, fasting is one of the activities that increase humanity in society but from an investor perspective its significance can be seen in terms of its effect of heightening the senses, making people more emotionally sensitive to the impact of external influences. Behavioural finance theory suggests that increased uncertainty can lead to greater dependence on behavioural heuristics, including optimism bias and outcome bias in financial decisions. To the extent that Ramadan generates a positive mood there may be an increased tendency to invest, and the positive mood could cause investors to be less discriminating and less analytical in relation to their stock market investments. High levels of stock market volatility at the start and at the end of Ramadan are consistent with increased synchronization of opinions. Increased synchronization would be accompanied by a greater intensity of herding. Ramadan is associated with increased social interaction, particularly at the beginning and the end of the period. This suggests there would be a strengthening of social effects on decision-making. The importance of social networks would increase. These developments would intensify herding, and are consistent with the increased synchronization associated with high volatility. In this paper we examine from a behavioural finance perspective the impact on Middle Eastern Islamic stock markets of a large proportion of the population simultaneously going through this religious process. Section 2 examines the relevant literature relating to the impact of sentiment and mood on stock markets. In Section 3 the data is described and the methodology applied is discussed. In Section 4 the results are presented and discussed and finally conclusions are drawn in Section 5.

The uncovering of social-mood-related anomalies is interesting from a theoretical perspective but from a trader's perspective, the more important issue is whether they represent anomalies from which profitable trading strategies can be developed. The high level of within-Ramadan volatility uncovered in this paper suggests that strategies based on specific Ramadan days (such as trading on first or last day effects) would not be viable. However, a whole-period Ramadan based strategy may potentially be profitable if it covered transaction costs. If Jordan is taken as an example, the cost of each trading position can be calculated according to the market value. The total commission fees per-trade in this market is normally 0.74%.6 As the bid-offer spread is not published by the ASE we refer to Omet (2001) who identified that the spread is approximately 0.31% per trade. The mean transacting cost per-trade in Jordan of 1.05% is therefore relatively high (compared, for example, to 0.26% for the NYSE; Venkararaman, 2000). Employing a buy and hold strategy of buying on the last trading day of the month before Ramadan and selling on the last trading day of Ramadan an investor could make 1.87%7 average excess returns. This is however 0.23% lower than the 2.10% total transactions cost. Table 5 estimates the potential net gain (loss) in the markets where there were statistically significant excess returns. This is done on the basis that the transactions costs are assumed to be the same across all markets. It can be identified from the table that a substantial return would only be made by investing in the Turkish market.