عنوان انگلیسی
A place for informal learning in teaching about religion: The story of an experienced non-Muslim teacher and her learning about Islam
دانلود فوری مقاله + سفارش ترجمه 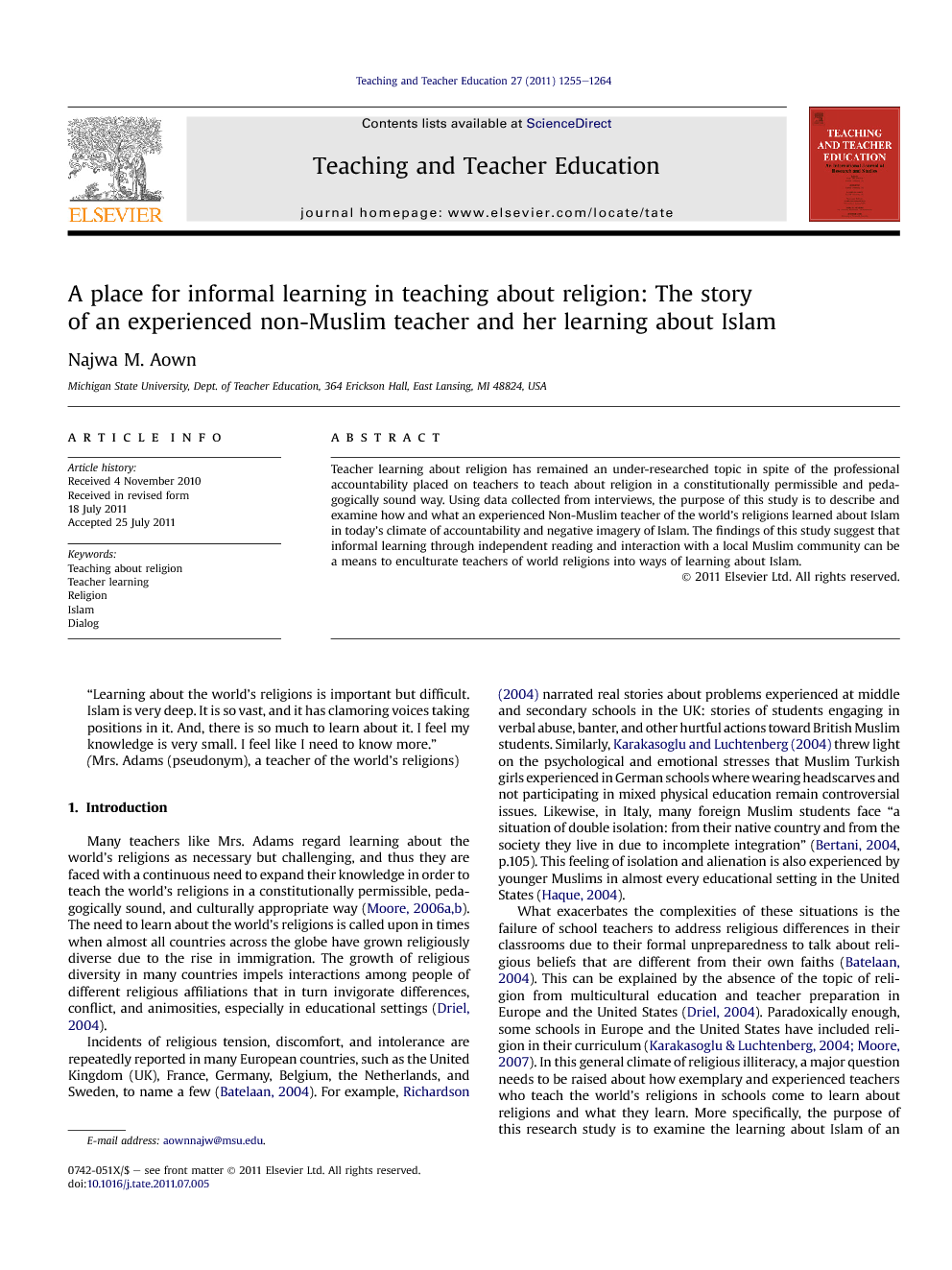 Teacher learning about religion has remained an under-researched topic in spite of the professional accountability placed on teachers to teach about religion in a constitutionally permissible and pedagogically sound way. Using data collected from interviews, the purpose of this study is to describe and examine how and what an experienced Non-Muslim teacher of the world’s religions learned about Islam in today’s climate of accountability and negative imagery of Islam. The findings of this study suggest that informal learning through independent reading and interaction with a local Muslim community can be a means to enculturate teachers of world religions into ways of learning about Islam.

Many teachers like Mrs. Adams regard learning about the world’s religions as necessary but challenging, and thus they are faced with a continuous need to expand their knowledge in order to teach the world’s religions in a constitutionally permissible, pedagogically sound, and culturally appropriate way (Moore, 2006a and Moore, 2006b). The need to learn about the world’s religions is called upon in times when almost all countries across the globe have grown religiously diverse due to the rise in immigration. The growth of religious diversity in many countries impels interactions among people of different religious affiliations that in turn invigorate differences, conflict, and animosities, especially in educational settings (Driel, 2004). Incidents of religious tension, discomfort, and intolerance are repeatedly reported in many European countries, such as the United Kingdom (UK), France, Germany, Belgium, the Netherlands, and Sweden, to name a few (Batelaan, 2004). For example, Richardson (2004) narrated real stories about problems experienced at middle and secondary schools in the UK: stories of students engaging in verbal abuse, banter, and other hurtful actions toward British Muslim students. Similarly, Karakasoglu and Luchtenberg (2004) threw light on the psychological and emotional stresses that Muslim Turkish girls experienced in German schools where wearing headscarves and not participating in mixed physical education remain controversial issues. Likewise, in Italy, many foreign Muslim students face “a situation of double isolation: from their native country and from the society they live in due to incomplete integration” (Bertani, 2004, p.105). This feeling of isolation and alienation is also experienced by younger Muslims in almost every educational setting in the United States (Haque, 2004). What exacerbates the complexities of these situations is the failure of school teachers to address religious differences in their classrooms due to their formal unpreparedness to talk about religious beliefs that are different from their own faiths (Batelaan, 2004). This can be explained by the absence of the topic of religion from multicultural education and teacher preparation in Europe and the United States (Driel, 2004). Paradoxically enough, some schools in Europe and the United States have included religion in their curriculum (Karakasoglu and Luchtenberg, 2004 and Moore, 2007). In this general climate of religious illiteracy, a major question needs to be raised about how exemplary and experienced teachers who teach the world’s religions in schools come to learn about religions and what they learn. More specifically, the purpose of this research study is to examine the learning about Islam of an exemplary and experienced non-Muslim teacher of a world’s religions class in an American public school. In the United States, teacher learning about religion has been a relatively under-researched topic in spite of the secured place that religion has on both educational and constitutional levels. The Establishment of the First Amendment of the U.S. Constitution1 bans American public schools from inculcating or inhibiting a particular religion. However, the Supreme Court in the 1963 case of Abington Township v. Schempp2 stated clearly that teaching about religion is necessary, legal, and sound for establishing a complete education. This set the ground for secular teaching about religion in lieu of a sectarian teaching of religion; the latter connotes a propensity for conversion, while the former leans toward education to promote respect, tolerance, and acceptance (Whittier, 1989). In spite of the necessity of teaching about religion, many teachers consider teaching and learning about religion, in particular Islam, an area of great challenge (Moore, 2009 and Nord, 1989). Islam is a strictly monotheistic religion founded in Arabia3 in the 7th century and is based on the teachings of the Prophet Muhammad and the Qur’an. Islam is predominant in northern Africa, the Middle East, Pakistan, and Indonesia, and there are divisions among Muslims over theology, practices, and laws (Moore, 2009). The challenge of teaching and learning about Islam is exacerbated by a widespread disagreement among scholars over the nature and role of Islam in world history and the contemporary era (Samman, 2005). Additionally, in political and popular discourse in the United States, Islam is intrinsically linked with terrorism, violence, and extremism and is considered anti-modern and anti-Western (Moore, 2006a and Moore, 2006b). The U.S. media also portrays Arab Muslims as “barbaric”, “cruel”, “bloodthirsty”, “anti-Christian” and “anti-Semitic” (Majaj, 1999, p.321). The representation of Islam is further complicated in the context of the current discussion of “the war on terror” and the confrontational relationship between the West and the Islamic world in the aftermath of 9/11 (Murray, 2004). As a result, these stereotypes and distortions about Islam and Muslims exacerbate the difficulty of what to include in and exclude from the topic of Islam when it is taught in schools (Wuthnow, 2005). Using data collected from interviews, the purpose of this paper is to examine the learning about Islam of an exemplary and experienced non-Muslim teacher of the world’s religions in an American public high school. More specifically, the research questions were the following: 1. How did the experienced teacher come to her interest in the learning about religion? 2. What learning activities did the experienced teacher report to have engaged in during her learning about Islam? 3. What learning outcomes did the experienced teacher report to have resulted from her learning activities? What follows is a brief review of the literature on teacher learning about religion and teaching about religion. I then lay out the findings of this study, which suggest that informal learning through interaction with the local Muslim community can be a means to enculturate teachers of the world’s religions into ways of learning and teaching about Islam.

In this study, Mrs. Adams embarked on a path of self-learning in order to learn about Islam. Initiating and directing her own learning process, Mrs. Adams explored new avenues to educate herself about Islam and its theology, laws, and practices. Through independent reading and interaction with Muslims at the mosque, Mrs. Adams was able to build a bridge with the Muslim world and gain knowledge about who Muslims are, what they do, and how they generally conduct. It is through the story of Mrs. Adams that self-directed learning is seen as an invaluable means to learn about anything, including the world’s religions. Through the power of independent learning, knowledge of the world is obtained at any time, in any place, through any means, and at any age. That said, why a person should wait for formal instruction to learn about the world’s religions, when he or she can choose to educate himself or herself at nearly any point in his or her life.