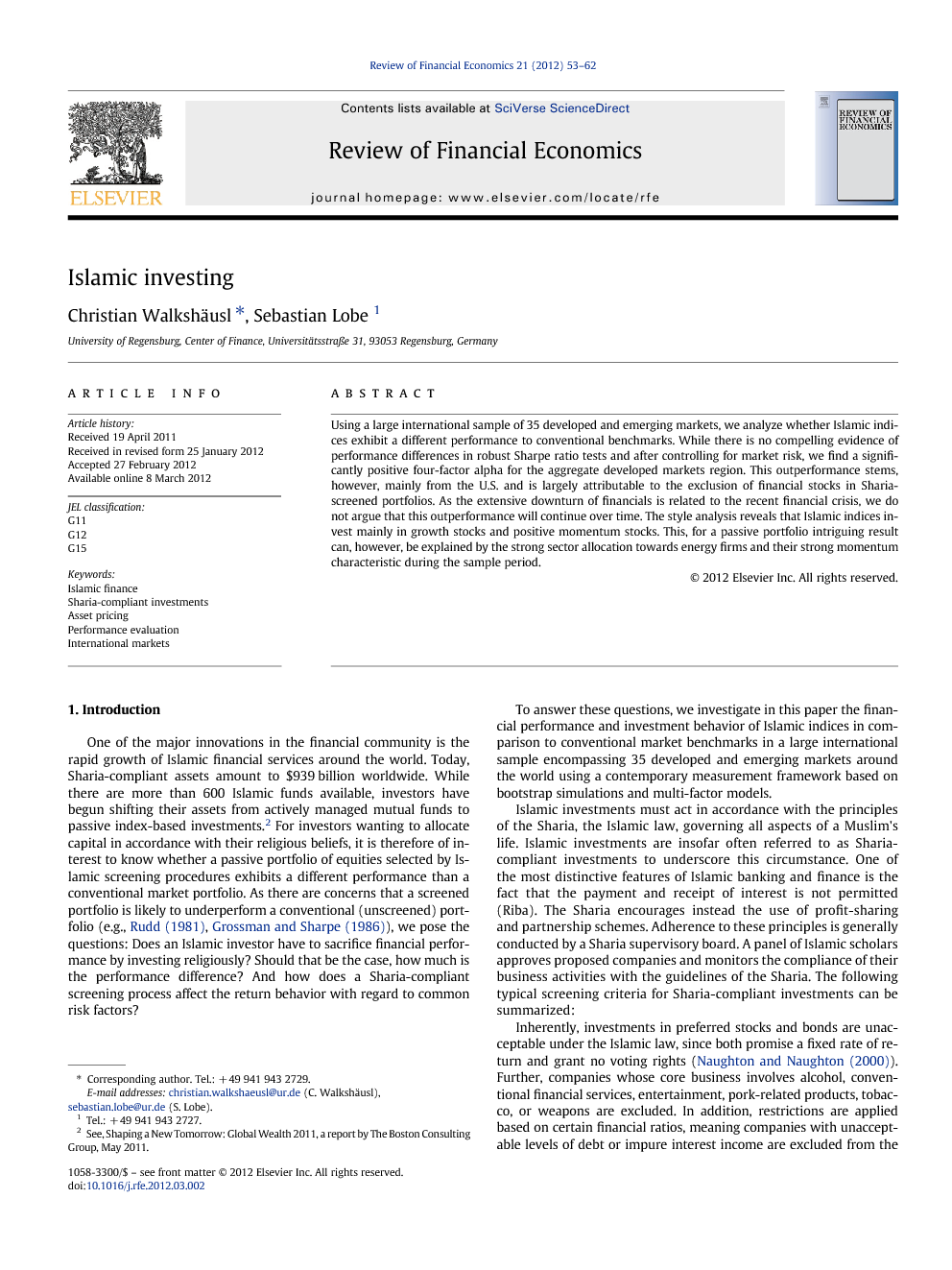 Using a large international sample of 35 developed and emerging markets, we analyze whether Islamic indices exhibit a different performance to conventional benchmarks. While there is no compelling evidence of performance differences in robust Sharpe ratio tests and after controlling for market risk, we find a significantly positive four-factor alpha for the aggregate developed markets region. This outperformance stems, however, mainly from the U.S. and is largely attributable to the exclusion of financial stocks in Sharia-screened portfolios. As the extensive downturn of financials is related to the recent financial crisis, we do not argue that this outperformance will continue over time. The style analysis reveals that Islamic indices invest mainly in growth stocks and positive momentum stocks. This, for a passive portfolio intriguing result can, however, be explained by the strong sector allocation towards energy firms and their strong momentum characteristic during the sample period.

One of the major innovations in the financial community is the rapid growth of Islamic financial services around the world. Today, Sharia-compliant assets amount to $939 billion worldwide. While there are more than 600 Islamic funds available, investors have begun shifting their assets from actively managed mutual funds to passive index-based investments.2 For investors wanting to allocate capital in accordance with their religious beliefs, it is therefore of interest to know whether a passive portfolio of equities selected by Islamic screening procedures exhibits a different performance than a conventional market portfolio. As there are concerns that a screened portfolio is likely to underperform a conventional (unscreened) portfolio (e.g., Rudd (1981), Grossman and Sharpe (1986)), we pose the questions: Does an Islamic investor have to sacrifice financial performance by investing religiously? Should that be the case, how much is the performance difference? And how does a Sharia-compliant screening process affect the return behavior with regard to common risk factors? To answer these questions, we investigate in this paper the financial performance and investment behavior of Islamic indices in comparison to conventional market benchmarks in a large international sample encompassing 35 developed and emerging markets around the world using a contemporary measurement framework based on bootstrap simulations and multi-factor models. Islamic investments must act in accordance with the principles of the Sharia, the Islamic law, governing all aspects of a Muslim's life. Islamic investments are insofar often referred to as Sharia-compliant investments to underscore this circumstance. One of the most distinctive features of Islamic banking and finance is the fact that the payment and receipt of interest is not permitted (Riba). The Sharia encourages instead the use of profit-sharing and partnership schemes. Adherence to these principles is generally conducted by a Sharia supervisory board. A panel of Islamic scholars approves proposed companies and monitors the compliance of their business activities with the guidelines of the Sharia. The following typical screening criteria for Sharia-compliant investments can be summarized: Inherently, investments in preferred stocks and bonds are unacceptable under the Islamic law, since both promise a fixed rate of return and grant no voting rights (Naughton and Naughton (2000)). Further, companies whose core business involves alcohol, conventional financial services, entertainment, pork-related products, tobacco, or weapons are excluded. In addition, restrictions are applied based on certain financial ratios, meaning companies with unacceptable levels of debt or impure interest income are excluded from the universe of investable stocks. Typically, companies with debt of more than one third of market capitalization are excluded (Hussein and Omran (2005)). Despite the growing interest in Islamic finance, there are few empirical studies exploring the performance of Islamic investment vehicles. Elfakhani and Hassan (2005) analyze the performance of 46 international Islamic mutual funds from 1997 through 2002 in comparison to a corresponding Islamic market index and a conventional market index. Based on the traditional measures of Sharpe, Treynor, and Jensen, their results suggest that the performance of Sharia-compliant funds and the chosen benchmarks is very similar. Using likewise a traditional performance evaluation framework, Hussein and Omran (2005) examine the performance of the Dow Jones Islamic Market Index (DJIMI) and its 13 sub-indexes (based on size and industry) against their conventional counterparts over the period 1996 to 2003. The authors find that Islamic indexes outperform in bull markets, but underperform in bear markets. Employing Sharpe's (1992) Style Analysis, Forte and Miglietta (2007) examine the asset allocation of the Sharia-compliant FTSE Islamic Europe index as a faith-based investment vehicle in comparison to conventional socially responsible investing (SRI) equity indexes. Finding distinctive differences in style, sector, and country exposure, they conclude that faith-based investments and SRI investments should be addressed as separate investment approaches. Albaity and Ahmad (2008) investigate the performance of the Kuala Lumpur Syariah Index (KLSI) and the Kuala Lumpur Composite Index (KLCI) from 1999 through 2005. Their results provide no evidence of significant statistical differences in risk-adjusted returns between the Sharia-compliant index and the conventional stock market index. Hoepner, Hussain, and Rezec (forthcoming) analyze the financial performance and investment style of 262 Islamic equity funds from twenty countries. The analyzed mutual funds underperform in eight countries, but outperform in three countries. Islamic funds tend to mimic the return behavior of small firms. Our findings are summarized as follows. While there is no compelling evidence of performance differences between Islamic indices and conventional benchmarks in robust Sharpe ratio tests and after controlling for market risk, we find a significantly positive four-factor alpha for the aggregate developed markets region. This outperformance stems, however, mainly from the U.S. and is largely attributable to the exclusion of financial stocks in Sharia-screened portfolios. As the extensive downturn of financials is related to the recent financial crisis, we do not argue that this outperformance will continue over time. The style analysis reveals that Islamic indices invest mainly in growth stocks and positive momentum stocks. This, for a passive portfolio intriguing result can, however, be explained by the strong sector allocation towards energy firms and their strong momentum characteristic during the sample period. The remainder of the paper is organized as follows. In Section 2, we describe the international data and present summary statistics. Section 3 outlines the methods and results for performance testing based on the Sharpe ratio. Section 4 examines whether the financial performance of Islamic indices is significantly different from conventional benchmarks using time-series factor regression tests. Section 5 contains additional analyses for robustness concerns, and Section 6 concludes.

The literature on the performance of Islamic indices is scarce. While prior research examines mostly mutual funds, the few papers focusing on Sharia-compliant indices study mainly one single equity market and use a relatively straightforward measurement framework. This paper advances the research in this field by investigating the performance and style of Islamic indices around the world in one comprehensive study employing a large international data set combining 35 developed and emerging markets and a contemporary evaluation framework based on bootstrap simulations and multi-factor models. We examine whether Islamic indices perform differently to conventional benchmarks using robust differences-in-Sharpe ratio tests and time-series factor regressions controlling for market risk (CAPM) as well as size, value, and momentum characteristics in the four-factor framework. In sum, we do not find compelling evidence of performance differences between Islamic indices and conventional benchmarks. Though we find a significant four-factor alpha for the U.S. Islamic index over the sample period, this outcome is largely attributable to the recent financial crisis and the related decline of financial stocks which are excluded in Sharia-compliant indices. Given the largely similar performance of the two index variants in the United States in the pre-financial crisis period and the assumption that the extensive downturn of bank and financial services stocks is special to the crisis, we do not argue that this outperformance will continue over time. Regarding the investment behavior of Sharia-compliant indices, we find that in developed markets, Islamic indices allocate capital primarily to growth stocks and firms with positive momentum, while they tend to invest particularly in large-capitalization stocks in emerging markets. Our findings contribute to the ongoing debate on whether screened portfolios (motivated through social responsibility or religious objectives) are determined to underperform conventional (unscreened) portfolios (e.g., Rudd (1981), Grossman and Sharpe (1986), Diltz (1995), Renneboog, Ter Horst, and Zhang (2007) and the references within). Our results provide supportive evidence that religious stock screens in the context of index-based Sharia-compliant investments do not reduce financial performance in comparison to conventional index investments around the world. This insight is particularly helpful for Sharia-compliant investors as they can pursue passive stock investments in accordance with their religious beliefs without sacrificing financial performance.