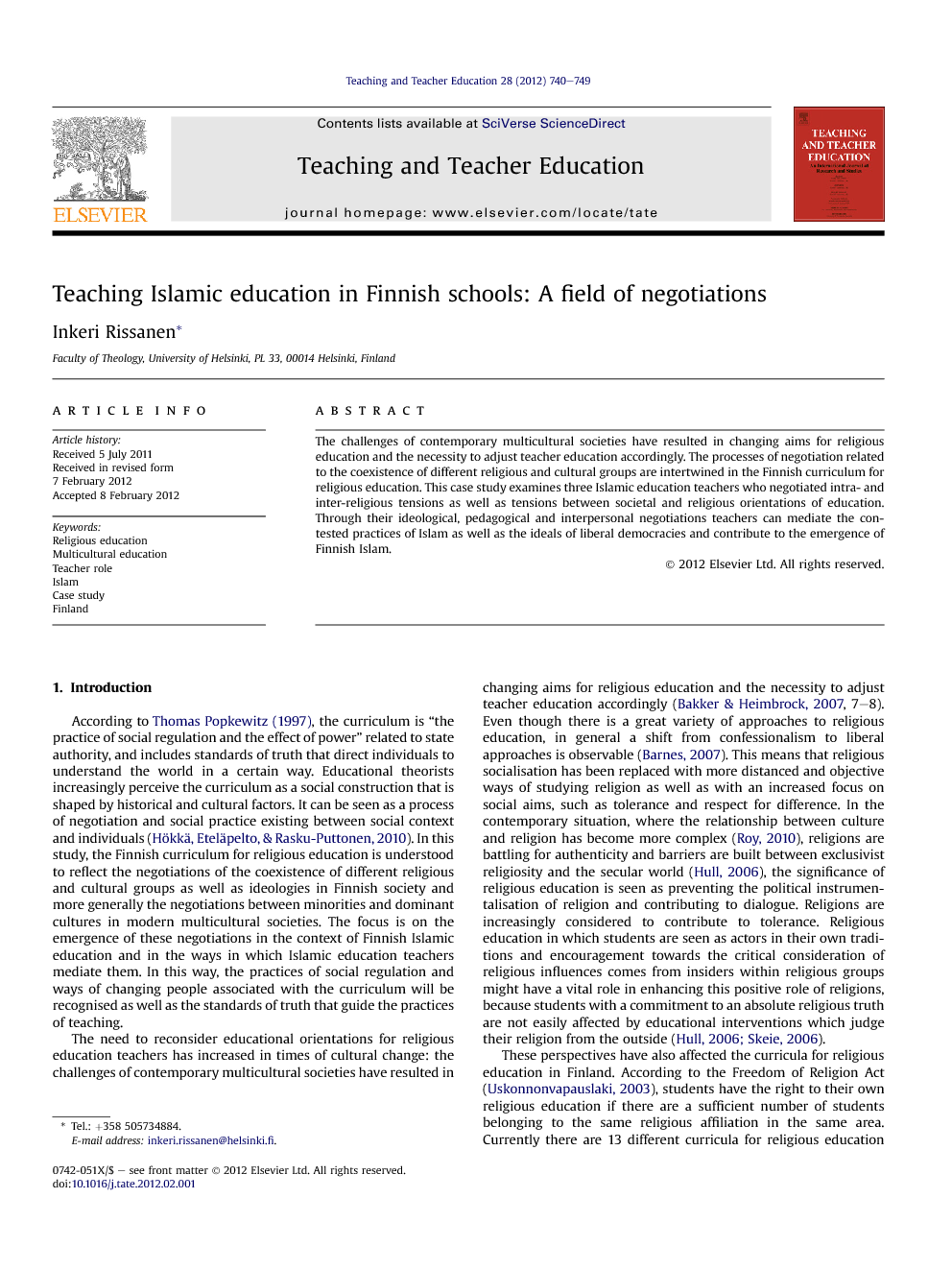 The challenges of contemporary multicultural societies have resulted in changing aims for religious education and the necessity to adjust teacher education accordingly. The processes of negotiation related to the coexistence of different religious and cultural groups are intertwined in the Finnish curriculum for religious education. This case study examines three Islamic education teachers who negotiated intra- and inter-religious tensions as well as tensions between societal and religious orientations of education. Through their ideological, pedagogical and interpersonal negotiations teachers can mediate the contested practices of Islam as well as the ideals of liberal democracies and contribute to the emergence of Finnish Islam.

When taken as a whole, these different negotiations which occurred in the context of Finnish Islamic education reflect the wider negotiations within Finnish society as well as within Islamic communities. There are struggles between different religious and cultural groups in the schools, but in addition to these, the schools have become stages of negotiation between multiculturalism and liberal secularism, the former stressing the support for particular cultural identities and the latter relying on the ideal of secular neutrality and unifying policies (Collet, 2007). On the academic and political level, negotiations concerning the possibility and prerequisites of universal ethics as well as peaceful coexistence in plural societies are ongoing. However, it is not possible to wait for a consensus to be achieved – practical decisions have to be made all the time. In some respects, the west waits for Muslims to accept the canons of the European Enlightenment, but it would be more useful to concentrate on creating arenas for negotiation on a practical level – educational institutions being among the most important ones (Moran, 2006). By mediating negotiations related to the coexistence of different cultural and religious practices the teachers in this study created in the school a space for “inter-civilisational dialogue”, which can be seen as an alternative to the predicted clash of civilisations (Tibi, 2002). In this kind of dialogue, the changing of both parties has to be considered possible. Acknowledging the legitimacy of both the Finnish curriculum for religious education and Islamic tradition led the teachers in this study into profound ideological negotiations: they served as agents of change by interpreting Islamic tradition, other religions and modern liberal values prominent in Finnish society in a way that facilitates their coexistence. They promoted the possibility of a commitment to the common values of liberal democracies while still holding on to a particular religious tradition. Thus, on the grassroots level, the teachers contributed to the emergence of the kind of Islam that is compatible with and viable in a context of Finnish multiculturalism. The teachers’ physical presence in the school and ways of mediating the voices of young people, other teachers and parents there enabled them to promote multicultural dialogue in everyday settings. Some Muslims reject secular society due to the Islamic ideal of the inseparability of religion and state, but there are also those who wish to construct a liberal form of Islam that is compatible with European ideas of citizenship and seek the political integration of Muslims with the help of “enlightened Islamic education” (AlSayyad, 2002 and Tibi, 2002). The Finnish curriculum for religious education which balances between the self-understanding of religious traditions and state-promoted values seems to offer a setting for creating this latter kind of religiosity. The curriculum encourages teachers to promote an understanding of Islam that is compatible with Finnish educational orientations and modern liberal values. The teachers of this study wanted to honour Islam as based on the authority of revelation, but took an authoritarian stance and represented Islam in a way that helps to ease the tensions within Islam as well as between Islam and western culture. Thus, offering this kind of Islamic education can be seen as an act of controlling Islam and Muslims, which seems to be a clear form of social regulation, which is built in to the Finnish curriculum. In this way, curriculum development can include processes of changing not only individuals but also communities and traditions (see Popkewitz, 2009). The Finnish curriculum for religious education creates a space for essentially transformative education: there is no status quo to be transmitted, it has to be created. This kind of educational ethos is a potential development trend for educating citizenship in post-modern multicultural societies, but it requires careful considerations concerning teacher professionality. In this study, the ability to mediate negotiations between different groups of people as well as between different educational and ideological influences was observed to be at the core of the professional roles of the teachers. Their practices accorded with Mason’s understanding of teaching as both a reproducing and a subversive action as well as Skeie’s notion of religious education teachers as agents of religious politics (Mason, 2000 and Skeie, 2006). On a more general level, the observations of this study indicate the problems in narrowing down the teachers’ professional roles to efficiently producing learning outcomes and acceptable test results. In multicultural contexts, all teachers are compelled to interact between different cultural and religious groups. Not only religious education teachers but all teachers in multicultural and multireligious schools have to negotiate the diversity of ideological influences that also affect educational orientations and values, the neutrality of which is no longer tenable. Pedagogical negotiations are always entwined with ideological negotiations, as demonstrated in this study by the teachers’ ways of interpreting and representing tradition when the Finnish curriculum compelled them to balance between Islamic and liberal educational ideals that are grounded on different “standards of truth” (Popkekewitz, 1997). Hence, in contemporary multicultural societies, the willingness and ability to negotiate should be a central professional skill of all teachers and especially teachers of religious education, who have to navigate between the spectrum of religious and cultural influences as well as the ideals of citizenship and different educational orientations. The ability to reflect on the ideological underpinnings of educational orientations, the contents of teaching as well as one’s own perspectives is at the core of teachers’ competence and is a necessary perquisite for mediating the negotiations integral to the curriculum. Thus, this kind of capacity for ideological reflection and self-reflection should be a central aim of teacher education together with the willingness to interact with different cultural groups affecting schooling.