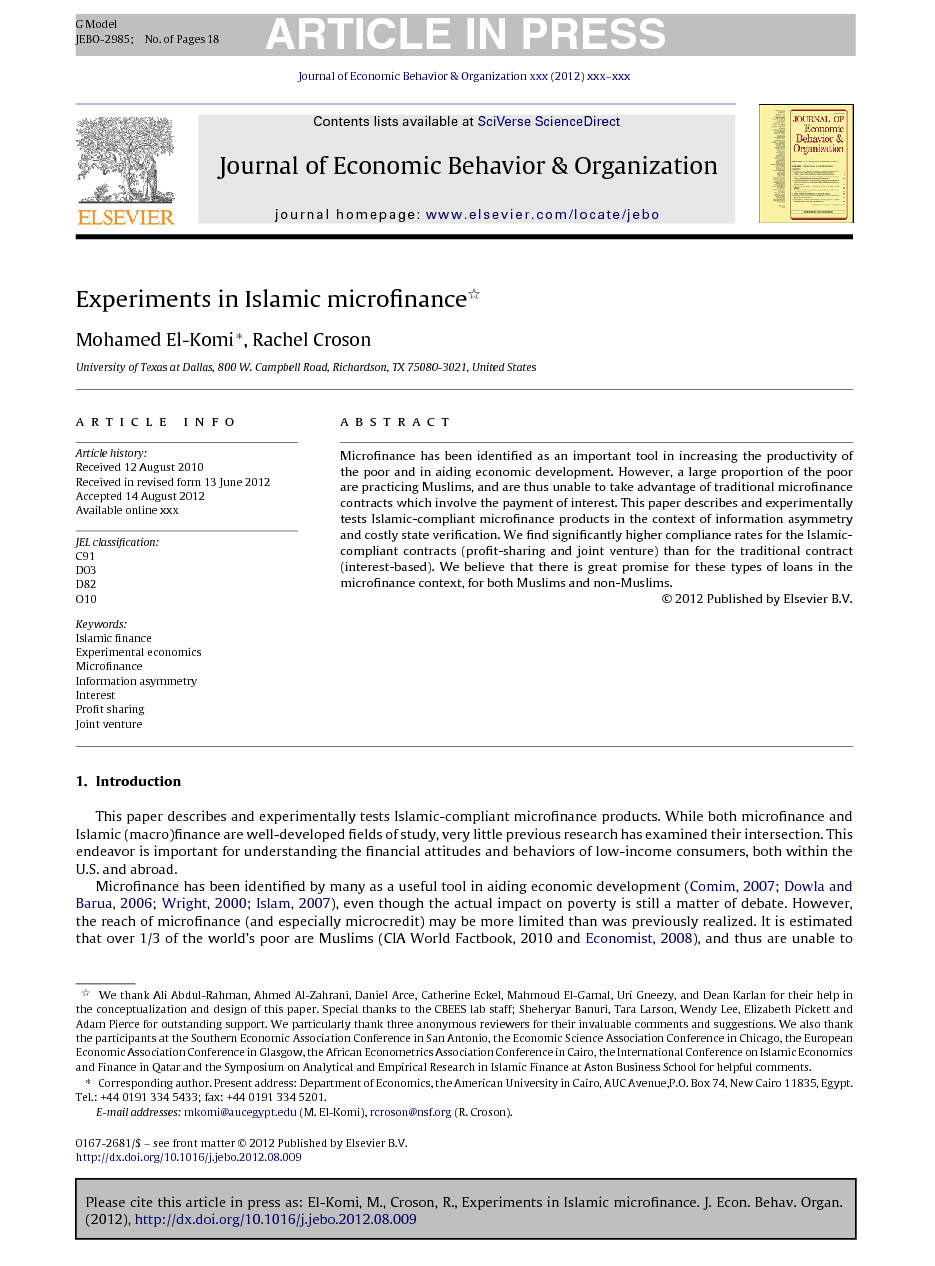 Microfinance has been identified as an important tool in increasing the productivity of the poor and in aiding economic development. However, a large proportion of the poor are practicing Muslims, and are thus unable to take advantage of traditional microfinance contracts which involve the payment of interest. This paper describes and experimentally tests Islamic-compliant microfinance products in the context of information asymmetry and costly state verification. We find significantly higher compliance rates for the Islamic-compliant contracts (profit-sharing and joint venture) than for the traditional contract (interest-based). We believe that there is great promise for these types of loans in the microfinance context, for both Muslims and non-Muslims.

This paper describes and experimentally tests Islamic-compliant microfinance products. While both microfinance and Islamic (macro)finance are well-developed fields of study, very little previous research has examined their intersection. This endeavor is important for understanding the financial attitudes and behaviors of low-income consumers, both within the U.S. and abroad. Microfinance has been identified by many as a useful tool in aiding economic development (Comim, 2007, Dowla and Barua, 2006, Wright, 2000 and Islam, 2007), even though the actual impact on poverty is still a matter of debate. However, the reach of microfinance (and especially microcredit) may be more limited than was previously realized. It is estimated that over 1/3 of the world's poor are Muslims (CIA World Factbook, 2010 and Economist, 2008), and thus are unable to take advantage of the existing, interest based, microcredit products (CGAP, 2008). The Consultative Group to Assist the Poor (CGAP) conducted a global survey in 19 Muslim countries in 2007, in which 20–40 percent of the respondents cited religious reasons for not using conventional microloans. Constructing and making available Islamic-compliant microfinance products would extend the reach of microfinance and aid in the economic progress of the Muslim poor in all countries, and the economic development of nations with large Muslim populations. Karlan and Morduch (2009) stress the importance of the way microfinance choices are offered, and argue that they may matter more than the pure economics of the choices with regards to take-up rates. The products tested in this paper rely on profit and loss sharing (PLS) contracts, and show how these options can contribute to the variety of microfinance choices, which should result in higher take-up rates of microfinance products. Our results indicate that these products can be more efficient (and more profitable for lenders) than traditional interest based contracts which are primarily offered, even among non-Muslim populations. The use of PLS contracts has traditionally been minimized in Islamic banking due to risks resulting from information asymmetry (such as enterprise failure, adverse selection, moral hazard and costly state verification) (El-Gamal, 1997). While the problems of enterprise failure and adverse selection are common for both PLS and interest based finance, moral hazard and costly state verification are more acute risks of PLS finance (e.g. Gale and Hellwig, 1985). Our paper focuses on comparing these PLS and interest based contracts when the lender needs to verify the project's state when the loan has not been repaid.1 PLS contracts are surprisingly sparse in the field. El-Gamal (1997) notes that Islamic banks over-rely on non-PLS contracts (such as: leasing, cost-plus and deferred payment sales), while using an accounting interest rate for their bookkeeping. Chong and Liu (2009) show that less than 1 percent of Islamic banking operations in Malaysia use PLS-based products and thus, most of the operations are interest based or -pegged. Dar and Presley (2000) cite agency problem as one of the main reasons behind the lack of PLS in Islamic banking. However, they confirm that there is no theoretical reason to make us believe that PLS is inherently less efficient than interest based contracts. That said, sometimes interest contracts incorporate PLS features. For example, Udry (1990) cites an example from Northern Nigeria (where Muslims are predominant) in which risk is shared by varying the interest rates that based on the realization of random production shocks. Our goal in this paper is to investigate the feasibility of PLS contracts in the presence of information asymmetry. We argue that PLS contracts pool risk between the lender and the borrower, much as a sharecropper agreement or a profit sharing franchise agreement. This risk pooling generates in a different power structure between the borrower and the lender than the interest contract. As a result, PLS contracts are seen as more equitable than interest contracts, and borrowers will feel a stronger obligation to comply with their terms and, in particular, to repay the loan when their project succeeds.2 In this paper, we develop and test Islamic-compliant microfinance contracts that are based on PLS. We use laboratory experiments as a “testbed” or “wind-tunnel” for these contracts (Plott, 1987). The laboratory can test, at very low cost, the behavioral response to different types of contracts. These contracts can then be adjusted or amended before being used in the field. The laboratory thus serves as an intermediate step between theoretical development and field-testing. We develop two microfinance contracts which are Islamic-compliant (profit sharing and joint venture) and compare them with an interest based loan. Borrowers invest these loans in risky projects, whose outcome is known to them but not to the lender. We examine compliance rates, the rate at which individuals comply with the terms of the loan, in the three contracts under three conditions. A no-enforcement condition involves a simple repayment or reporting decision by the borrower. An enforcement condition allows the lender to follow up on the decision, and to force collection or audit the project's outcome if appropriate. An enforcement with penalty condition also allows the lender to charge a penalty to the borrower if he has defaulted on the loan or misreported the success of his project. Our results indicate that the Islamic-compliant loans induce at least as much compliance as the interest based loans in all three conditions (no-enforcement, enforcement and enforcement with penalty), although the differences between the three contracts decrease as the possibility of penalty is introduced. We believe that there is great promise for these types of loans in the microfinance context, and discuss strategies for field implementation in the conclusion of the paper. The paper is organized as follows. Section 2 discusses the practice of Islamic finance, microfinance, and their combination. Section 3 describes our theoretical model and Section 4 our experimental design. Section 5 presents our experimental results and Section 6 concludes.