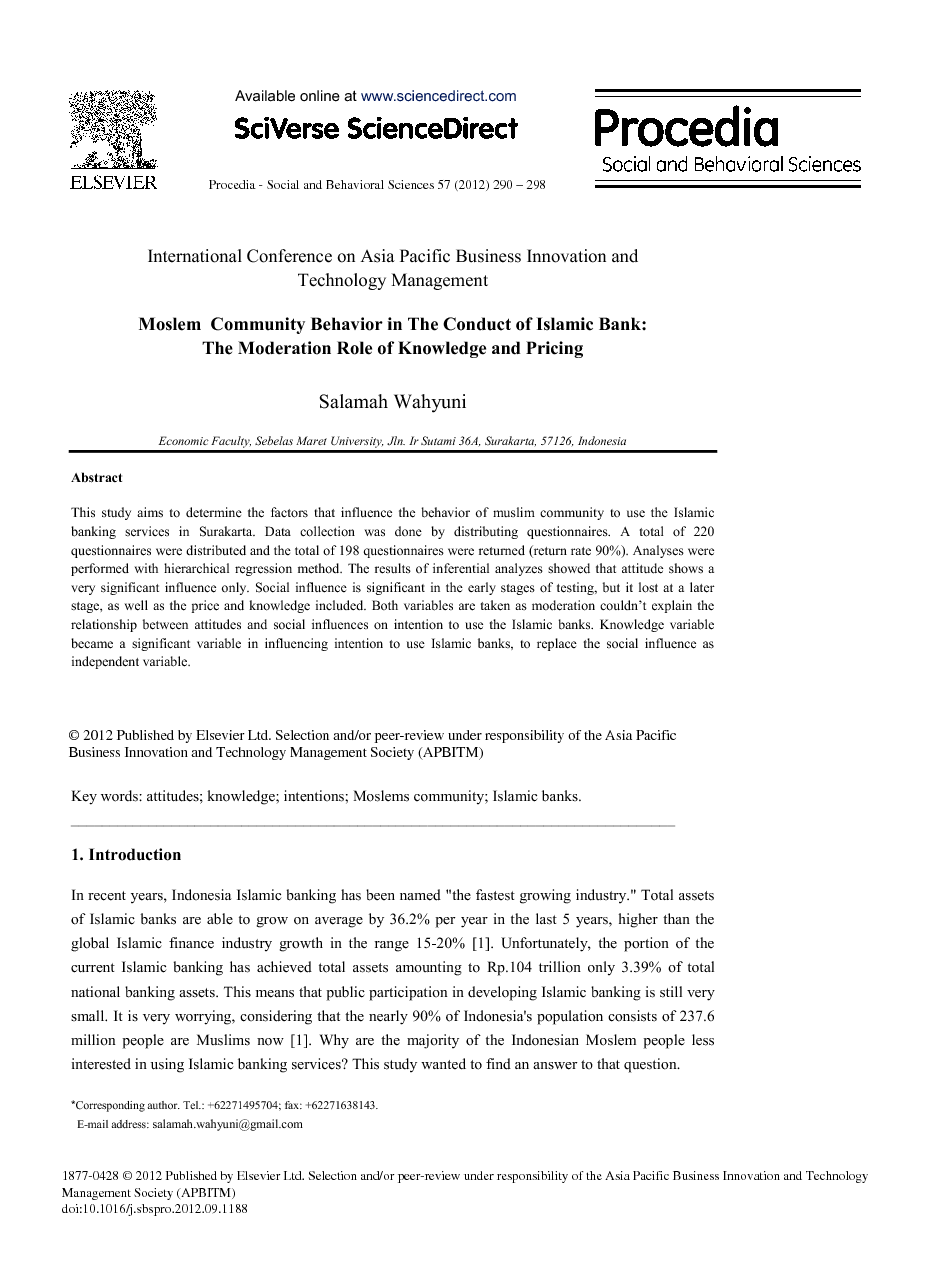 This study aims to determine the factors that influence the behavior of muslim community to use the Islamic banking services in Surakarta. Data collection was done by distributing questionnaires. A total of 220 questionnaires were distributed and the total of 198 questionnaires were returned (return rate 90%). Analyses were performed with hierarchical regression method. The results of inferential analyzes showed that attitude shows a very significant influence only. Social influence is significant in the early stages of testing, but it lost at a later stage, as well as the price and knowledge included. Both variables are taken as moderation couldn’t explain the relationship between attitudes and social influences on intention to use the Islamic banks. Knowledge variable became a significant variable in influencing intention to use Islamic banks, to replace the social influence as independent variable.

In recent years, Indonesia Islamic banking has been named "the fastest growing industry." Total assets of Islamic banks are able to grow on average by 36.2% per year in the last 5 years, higher than the global Islamic finance industry growth in the range 15-20% [1]. Unfortunately, the portion of the current Islamic banking has achieved total assets amounting to Rp.104 trillion only 3.39% of total national banking assets. This means that public participation in developing Islamic banking is still very small. It is very worrying, considering that the nearly 90% of Indonesia's population consists of 237.6 million people are Muslims now [1]. Why are the majority of the Indonesian Moslem people less interested in using Islamic banking services? This study wanted to find an answer to that question. Community participation in the use of sharia banking service involves attitudes, decision making process and behavior. There has been mach research on attitudes and behavior that have been produced including the sharia banking access. Survey by [2] of 300 post graduate student at three universities in in the Klang Valley, namely the International Islamic University Malaysia, Universiti Teknologi MARA and University Putra Malaysia, found that the attitudes and social influence of a valid construct in explaining individual acceptance of Islamic financial products. Much earlier, the study [3] indicates that customers who choose Islamic banks are not influenced by the bonds of religion only but also the pricing of Islamic banking products. These results are supported by research [4] and [5]. By using quantitative methods, analysis of 141 bank customers in Labuan, Malaysia, [5] found that the principles of sharia, the payment per month lower, transparency, and interest-free practice is a very important criteria in considering the decision of the selection of financial services Islamic household. More than ten years earlier, [4] also showed evidence that one of the Islamic banking products are albay 'bithaman ajil (purchasing products through the bank by installments) dominate banking in Malaysia. Latter study of Amin, conducted with Abdul Rahim Abdul Rahman, Stephen Jr. Sondoh Laison., and Ang Magdalene Chooi Hwa [6] to assess the determinants of customer intention to use the Islamic personal financial services. Through the sample consisted of 150 customers who are drawn from two Islamic banks in Malaysia, namely Bank Islam Malaysia Berhad and Bank Muamalat Malaysia Berhad, they want to see the effects of attitude, social influence, the bonds of religion, government support, and pricing, on the intention to use the Islamic personal finance services. Research model is derived from a model developed by Fishbein and Ajzen [6] is known as TRA (Theory of Reasoned Action). In this model placing three variables, the religious obligation, government support, and pricing as a moderating variable, to explain relationship between attitudes and social influences on customer intention to use the Islamic personal financial services. But in the analysis and results, the effect of moderation was not detected. The results obtained show that among the five variables were studied, two of them, the religious obligation and government support is not significant. It means that, the intention of Malaysian community to use the Islamic financial services is influenced by attitude, social influence, and pricing of Islamic banks. The religion obligation and government support don’t encourage them to use Islamic bank. This study wanted to know the factors that influence individuals to use the services of Islamic banking in Indonesia. By using the framework of the study TRA like [6], who had already been researching Islamic banks, modification done through moderation effect of knowledge and pricing as [7].