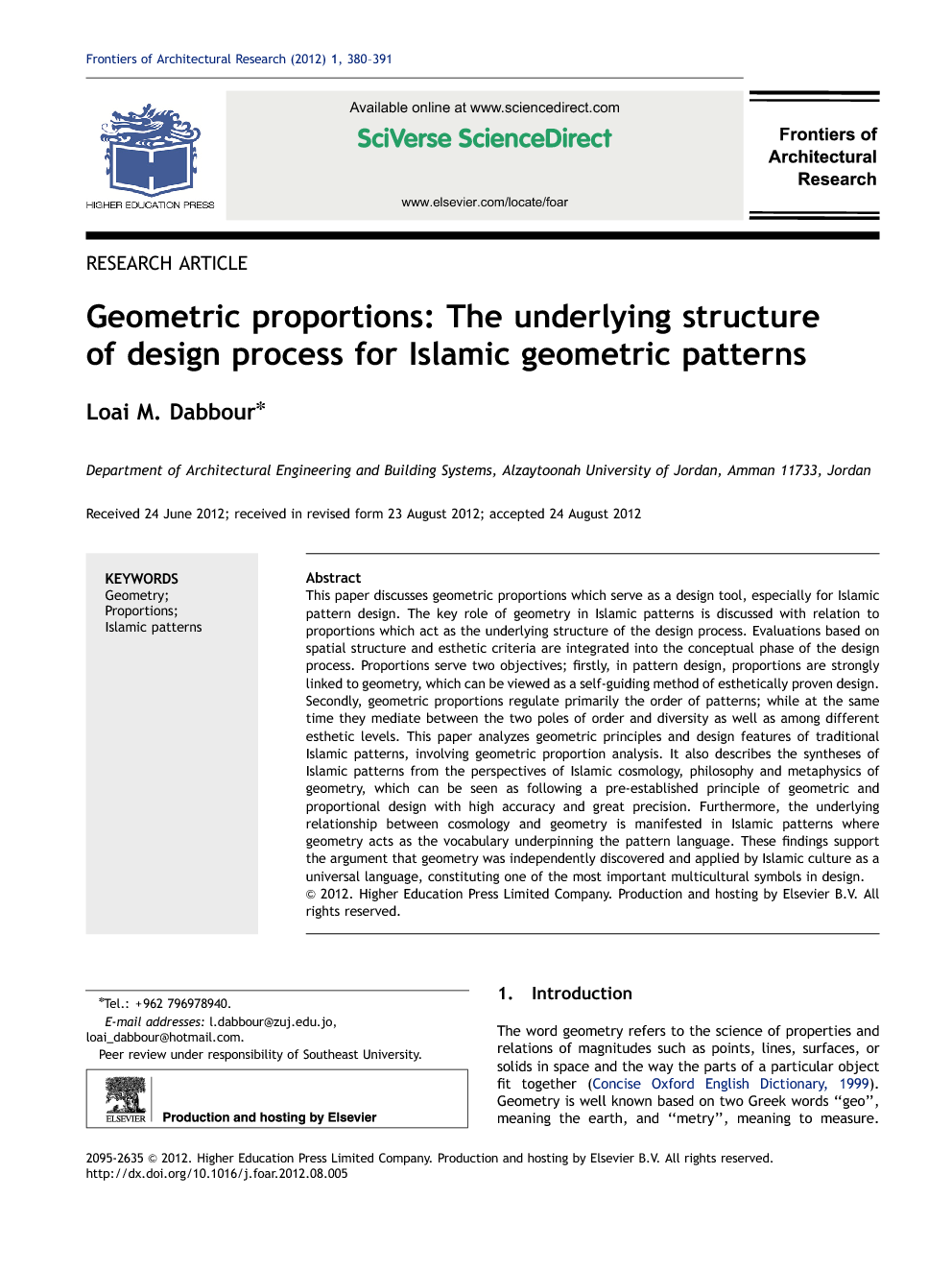 This paper discusses geometric proportions which serve as a design tool, especially for Islamic pattern design. The key role of geometry in Islamic patterns is discussed with relation to proportions which act as the underlying structure of the design process. Evaluations based on spatial structure and esthetic criteria are integrated into the conceptual phase of the design process. Proportions serve two objectives; firstly, in pattern design, proportions are strongly linked to geometry, which can be viewed as a self-guiding method of esthetically proven design. Secondly, geometric proportions regulate primarily the order of patterns; while at the same time they mediate between the two poles of order and diversity as well as among different esthetic levels. This paper analyzes geometric principles and design features of traditional Islamic patterns, involving geometric proportion analysis. It also describes the syntheses of Islamic patterns from the perspectives of Islamic cosmology, philosophy and metaphysics of geometry, which can be seen as following a pre-established principle of geometric and proportional design with high accuracy and great precision. Furthermore, the underlying relationship between cosmology and geometry is manifested in Islamic patterns where geometry acts as the vocabulary underpinning the pattern language. These findings support the argument that geometry was independently discovered and applied by Islamic culture as a universal language, constituting one of the most important multicultural symbols in design.

The word geometry refers to the science of properties and relations of magnitudes such as points, lines, surfaces, or solids in space and the way the parts of a particular object fit together (Concise Oxford English Dictionary, 1999). Geometry is well known based on two Greek words “geo”, meaning the earth, and “metry”, meaning to measure. So geometry literally means “the measurable earth” or “earthly measurements”. Geometry, according to Plato, can also refer to the science of stereo-metry or “spatial measurements”. The very laws of how things are allowed to be by the “Divine will” are the laws of “Harmony of Being”. Tradition holds that, as engraved over the entrance to Plato's Academy, “Only he who is familiar with geometry shall be admitted here” (Critchlow, 1976). Geometry has existed in many buildings and design forms across centuries. The first confirmed record of geometric knowledge and its relationship to astronomy, human and music can be traced back to the ancient Greeks, in particular, Pythagoras and Plato. However, prior to the Greeks, many old civilizations have left clear geometric footprints by applying sacred geometry in their constructions. The prehistoric carved stones found in Scotland representing the Platonic Solids.1 can be dated back to over a thousand years earlier than the Greeks.2 The Greeks may well have been the first to have offered geometry to the public, but they were, by no means, the first to realize it (Critchlow, 1987; Hecht, 1988; Critchlow, 1987). Geometric ratios and proportions existed and were employed in the design of ancient sacred and ceremonial sites in all traditional civilizations. They were invariably built with dimensions that incorporate mathematical numbers, constants and ratios such as the “golden/sacred mean”, and the use of geometries based on proportional roots, proportional rectangles and Pythagorean triangle (Pennick, 1994). For example, Christian cathedrals incorporated symbolic geometry, while the design of Hindu and Buddha temples was based on sacred geometry. In Islamic art, geometric elements have been employed since its origin and were used to create unique geometric formations, serving as the underlying structure of Islamic design process. Geometry or proportional geometry is a sacred art form due to its fundamental association with the Creation's principal laws. The visual expression of the order of these laws is best represented through the discipline of geometry. Geometry is both quantitative and qualitative in nature. Its quantitative dimension regulates the order and construction of design forms. Its qualitative nature sets the proportions of design forms and represents an expression of the order of the universe as a visual representation of the truth. Each figure or geometric shape, when seen from the perspective of its symbolic meaning, represents an echo of unity and a reflection of the values and principles within the larger frame beyond that unity (universal unity) (Ardalan and Bakhtiar, 2000). Seyyid Hossein Nasr argued that geometry and rhythm manifest a doctrine of unity which is central to Islam, upon which Islamic art developed based on mathematical ratios and proportions which represent the very heart of Islam (Critchlow, 1976). Geometry is the blueprint of the Creation and the generator of all forms. It is a science that deals with numbers in space on four basic levels: the first one is arithmetic (pure numbers), i.e., any measurement or proportion is a geometrical measurement. The second level is numbers in space which represent proportional geometry. They reflect the meanings and “Ideas”. The third level is numbers in time, which is the foundation of music. The fourth level is numbers in space and time which represent the cosmology of the universe. Geometry explores and explains the patterns that unify and reveal the structure of the Creation within all natural patterns of growth or movement and their conformity with geometric shapes. All life forms emerge out of timeless geometric codes. Viewing and contemplating these codes allow us to understand the wisdom of the inner workings of the universe in order to fully comprehend and appreciate its beauty based on the concept of proportions. Ikhwan Al-Safa wrote, “One of our aims… consists of demonstrating clearly that the whole world is composed in conformity with arithmetical, geometrical, and musical relations. There, we have explained in detail the reality of universal harmony” (Nasr, 1978). Geometric proportions in architectural patterns represent a design language, as words do in a spoken language. They determine the frameworks within which elements may be arranged into a pattern, a relation between one element and another, and a proportional relation within one element. They address and reflect the natural laws that govern the basic harmonies of nature, being describable by means of mathematics and geometry. Islamic art favors geometry because of its intelligible aspect. Geometry possesses abstraction and the capacity to express and reveal objectively immutable and spiritual truths. Geometry involves proportions and prime roots that are considered the most beautiful proportions (the proportions of beauty). As such, beauty, for the Muslim artists, is objective and self-expression of truths, which is the essential nature of beauty as Plato stated, “Beauty is the splendor of the truth” (Burckhardt, 1987). The language of Islamic design springs primarily from the abstract. Therefore, geometry in general and geometrical proportion in particular carry great importance in the design process of Islamic art, presented in its primary elements, geometry, biomorphic forms, and calligraphy, which are all based on and ruled by the underlying geometric laws (proportions). It follows that the Islamic design principles are reflected in geometry. In other words, geometry plays a central role in Islamic design. This paper examines Islamic pattern design, which can be viewed as a key method of expressing Islamic cosmological esthetics. In addition to representing cosmological and philosophical structures at the level of form, geometric patterns can also be seen as efficient and powerful representations of some of the central concepts that characterize Islamic debates on the divine nature. Islamic pattern was developed as visual tools for contemplating the underlying mathematical nature of the universe, leading to the nature of beauty, by virtue of God's creation of the universe (the nature of the divine itself).

We can conclude that proportion is a characteristic of (traditional) Islamic patterns, serving as a tool of self-guiding process for esthetically proven design. Muslim builders knew of the autonomy or “inner laws” in constructing spaces and patterns. The relations among various parts can be seen everywhere in ancient buildings. In other words, buildings were designed with particular care, exhibiting mastery in pattern design of their spaces and surfaces. Geometric proportions regulate the order of patterns based on mathematical ratios, which is influential in understanding the universe, man and nature; these proportions are, by their nature, the essential ingredients in sacred geometry, as Pythagoreans stated that these harmonic ratios render music in a balanced pattern. Geometric proportion is strongly linked to Islamic cosmology, philosophy and metaphysical dimensions. It brings meanings and spiritual exercises for the viewer, deconstructing the meanings underpinning the geometric framework. As such, the viewer is more than an observer; he or she is a participant in the establishment of a strong link with geometry symbolizing man, nature and cosmos. The geometry as well as its rhythm shown in Islamic patterns illustrates an infinite variety, permitting and encouraging contemplative reflections. It is one of the most powerful forms of sacred art It is a source of contemplation that allows our minds to wander and contemplate the infinite. These patterns were developed with strict geometric rules, relating to the understanding of natural forms based on geometric ratios in the cosmos, set as the prime mover behind design.