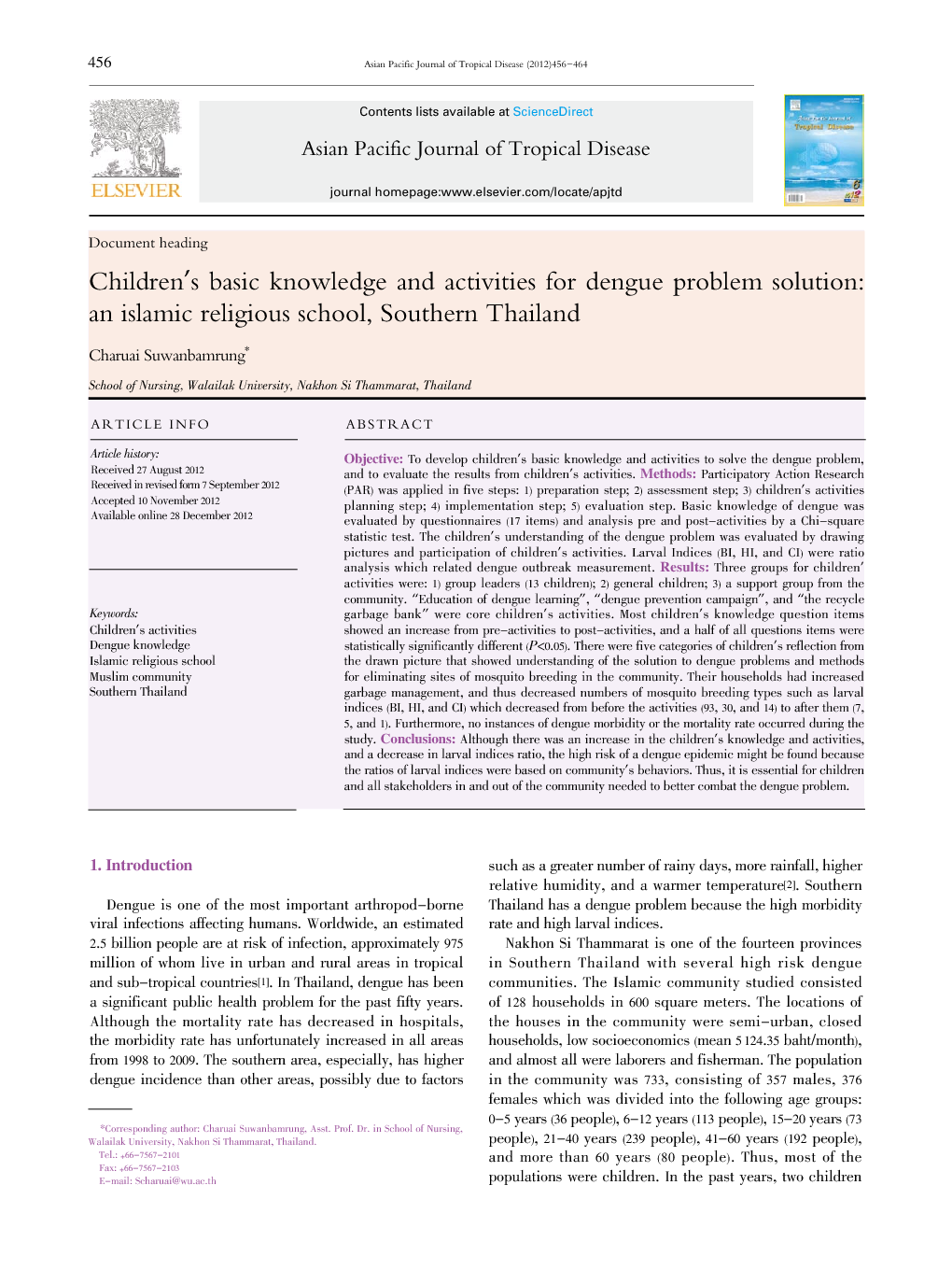 Objective To develop children's basic knowledge and activities to solve the dengue problem, and to evaluate the results from children's activities. Methods Participatory Action Research (PAR) was applied in five steps: 1) preparation step; 2) assessment step; 3) children's activities planning step; 4) implementation step; 5) evaluation step. Basic knowledge of dengue was evaluated by questionnaires (17 items) and analysis pre and post-activities by a Chi-square statistic test. The children's understanding of the dengue problem was evaluated by drawing pictures and participation of children's activities. Larval Indices (BI, HI, and CI) were ratio analysis which related dengue outbreak measurement. Results Three groups for children’ activities were: 1) group leaders (13 children); 2) general children; 3) a support group from the community. “Education of dengue learning”, “dengue prevention campaign”, and “the recycle garbage bank” were core children's activities. Most children's knowledge question items showed an increase from pre-activities to post-activities, and a half of all questions items were statistically significantly different (P<0.05). There were five categories of children's reflection from the drawn picture that showed understanding of the solution to dengue problems and methods for eliminating sites of mosquito breeding in the community. Their households had increased garbage management, and thus decreased numbers of mosquito breeding types such as larval indices (BI, HI, and CI) which decreased from before the activities (93, 30, and 14) to after them (7, 5, and 1). Furthermore, no instances of dengue morbidity or the mortality rate occurred during the study. Conclusions Although there was an increase in the children's knowledge and activities, and a decrease in larval indices ratio, the high risk of a dengue epidemic might be found because the ratios of larval indices were based on community's behaviors. Thus, it is essential for children and all stakeholders in and out of the community needed to better combat the dengue problem.

Dengue is one of the most important arthropod-borne viral infections affecting humans. Worldwide, an estimated 2.5 billion people are at risk of infection, approximately 975 million of whom live in urban and rural areas in tropical and sub-tropical countries[1]. In Thailand, dengue has been a significant public health problem for the past fifty years. Although the mortality rate has decreased in hospitals, the morbidity rate has unfortunately increased in all areas from 1998 to 2009. The southern area, especially, has higher dengue incidence than other areas, possibly due to factors relative humidity, and a warmer temperature[2]. Southern Thailand has a dengue problem because the high morbidity rate and high larval indices. Nakhon Si Thammarat is one of the fourteen provinces in Southern Thailand with several high risk dengue communities. The Islamic community studied consisted of 128 households in 600 square meters. The locations of the houses in the community were semi-urban, closed households, low socioeconomics (mean 5 124.35 baht/month), and almost all were laborers and fisherman. The population in the community was 733, consisting of 357 males, 376 females which was divided into the following age groups: 0-5 years (36 people), 6-12 years (113 people), 15-20 years (73 people), 21-40 years (239 people), 41-60 years (192 people), and more than 60 years (80 people). Thus, most of the populations were children. In the past years, two children September, 2010 was 638 per 100 000 people and higher than the Thai Ministry of Public Health’s disease standard (<20 per 100 000 populations). Although, there were no instances of mortality during this time, the morbidity showed that the area was at risk of a dengue epidemic. Moreover, the larval indices (BI: 74, HI: 22, and CI: 12) of the community were higher than the standard (BI<50, HI<10, and CI<1). These indexes were strongly positively correlated with epidemic and transmission intensity[3, 4]. There were 80 children studying at the Islamic religious school in the community which opened every Saturday and Sunday and teaching Islamic ideals such as the Islamic legal code, role and function of the Muslim people, and the major activities of Muslims. Their age was 7-15 years. All stakeholders in the community and the children group leaders met and concluded that children’s activities were needed for solving the dengue problem because dengue morbidity was found for two children in the school. Previous studies have shown that school-based education and activities are an important compliment to increasing children’s knowledge of and participation in the dengue problem solution[5-8]. Thus, the present study aims to develop children’s basic knowledge and activities for addressing the dengue problem, and to evaluate the results from children activities.

An Islamic religious school was the center of the Muslim community. Children stayed in the community with their family. Although, the community has a city water supply and garbage disposal, the community land was plain with no ditches for releasing water when there’s heavy rain. There had been a lack of garbage management in the community most people usually discard garbage into the canal and public area, and surrounding household. Their households were closed buildings. The community had a low socioeconomic population (mean 5 124.35 baht/month) because their occupations were laborers and fisherman. According to the above reasons, the community had a high risk of dengue[14] (morbidity rate 638/100 000 population). Although there were no reported deaths due to dengue the morbidity rate of community in 2010 were higher than 20/100 000 population which Thai Ministry of Public Health index. The morbidity rate was associated with HI (30%) reflecting female Aedes aegypti 500 000 mosquitoes/km2 which results in a high risk of a dengue epidemic[14]. first survey of the study found several sources of mosq breeding in the community such as discarded contai The uito ners (33%), drinking water containers (19%), and water containers in the bathroom and toilet (18%) associated with previous studies about water containers breeding sites[15,16]. The children’s activities for dengue problem solutions in the study (education program, dengue prevention campaign, and recycle garbage bank) were based on the context of the religious school (children, teachers, and religious leaders) and the community (community leaders, parents of children, and stakeholders). The participatory approaches in five steps were preparing all stakeholders to find the ideas for solving the dengue problem, meeting for planning, conducting the activities, and evaluation. The results of the study showed improvement in children’s knowledge, ability to draw pictures, garbage management, larval indices, and dengue morbidity rate because the stakeholders were supporting such as their parents, teachers, and community leaders. These process and the results of the study confirmed the concept of community participatory action which increased community capacity for tackling dengue[17,18]. The basic knowledge and activities of children in the study were followed with the community survey and dengue knowledge of the children in pre-activities participating in the support group (one researcher, health care provider, health village volunteer, community leader, and teacher). The support group was an important group for enhancing children’s activities. For the planning and implement phases, children participated in group discussion for setting up the recycle garbage bank, dengue knowledge training, and a campaign for promoting solutions to dengue as core activities for the children[8]. The three groups met once a month for promotion of activities concerning dengue. The assessment and reassessment showed changes in the children’s and their family behavior such as an increase in basic knowledge[19], and better garbage disposal by the family aiding solution of the dengue problem in the community[15]. The basic knowledge increased post- activities, but the two questions “Aedes aegypti is a conductor of dengue fever” and “managing garbage in your house can prevent dengue fever” did not show significantly different statistics. It may be that the scientific name of the mosquito “Aedes aegypti” is not common knowledge, while the item of management garbage to prevent dengue fever may be complex for children who cannot relate garbage, to mosquitos, and dengue fever. The growth and development stage of the children and their knowledge were not a focus of the study. Accordingly the questions 4, 5, 7, and 8 were more correct post-activities (P<0.05) and questions 3, 6, 13, and 17 were significantly better post-activities (P<0.001), these items involved signs and symptoms of dengue and solutions which are presented in the common media such as television. Thus, dengue knowledge can be taught to children in community based schools [7,8,19,20]. The larval index (BI, HI, and CI) of after the activities were decreased to 7%, 5%, and 1 %, its level was low compared to the standard level of the Thai Ministry of Public Health. However, it showed the results of small sample size which were estimated lower than 100 households[11]. In the study, the larval indices were indirect as the outcome of children’s knowledge and activities, but they were confirmed as primary measurement tools for monitoring larval populations and are easily used in the community. Moreover, the morbidity and mortality rate of dengue was not present during the study and one year after the project was closed. However, the children in the Islamic religious school need formal education regarding dengue because it was successful in developing knowledge[8,20]. The highlight of the children’s activities was “the recycle garbage bank” because they can run the process of activities by themselves. The support group gave partial support sometimes during the study. The activity was a strategy developed by the community. Parents supported the children to collect and select recyclable garbage for sending to the garbage bank at school. Moreover, their families participated in the larval indices survey. T he study showed the participation of all stakeholders was important for dengue control in the community and confirms previous studies of dengue in schools[18,19]. Particularly, the dengue knowledge and activities of children in the religious school which opens only Saturday and Sunday are needed to improve because the school is at the center of the community. The number of children in the Islamic religious school was dynamic because the numbers changed during the study program as the students need to volunteer, and thus their available time is based upon the number of classes they have. The sample size in the study was not the same children in the pre and post-activities. In a future study, the study needs to test knowledge the number of participants in a strict manner. Although, the larval indices were under- estimated the papal indices which are related to adult mosquito can be implemented in practical measurements in the community.