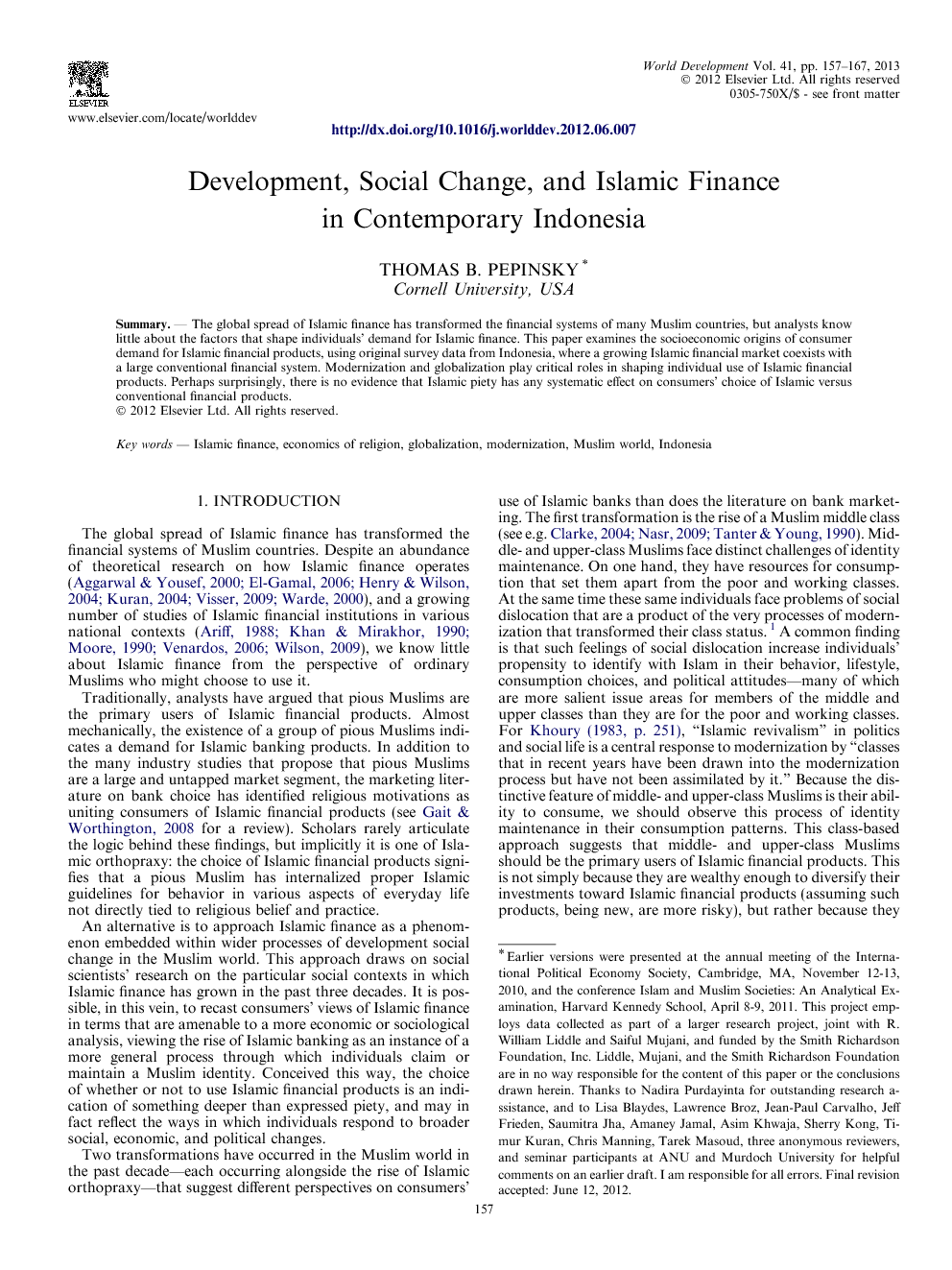 The rise of Islamic finance is part of a larger phenomenon of a global Muslim renewal that has occurred over recent decades. Mainstream development scholars are today beginning to take seriously the important changes in national financial systems that have been brought about through the rise of Islamic finance. Theoretical studies of Islamic finance have demonstrated the ways in which contract forms deemed theologically permissible to Muslim scholars can be applied to modern financial practices. Likewise, studies of Islamic financial systems have charted the historical origins of modern Islamic finance, described how Islamic finance works in practice, and identified the ways in which various national systems differ from one another. Almost entirely omitted from this literature is the focused study of what determines individual demand for Islamic financial products. This paper begins to fill this gap in the literature. Considering the use of Islamic financial products as a claim about identity rather than merely a consequence of one’s piety or religiosity encourages analysts to look beyond religion to other factors that may influence individuals’ strategies for identity maintenance. Focusing on Indonesia—where conventional and Islamic financial systems coexist, where expressed piety is on the rise, and where Muslims face the social changes inherent in modernization and globalization—we discover that piety is far less important as a factor in shaping individuals’ use of Islamic financial products than commonly believed. Instead, modernization and globalization play decisive roles in shaping individual use of Islamic financial products. The picture that these empirical results paint is static, focusing on a snapshot of contemporary Indonesia rather than on the processes through which class formation and global identity formation promote the use of Islamic financial products. But the cross-sectional variation that identified here among Indonesian with regard to their individual use of Islamic financial products is informative, and is consistent with the view that modernization and globalization rather than religious change itself are the factors driving the rise of Islamic finance. These findings give new context to research on development, social change, and identity in the Muslim world by exploring an important but understudied component of Muslims’ daily lives. Far from being irrelevant or inconsequential due the fact that it so closely parallels conventional finance, Islamic finance is a uniquely powerful symbol of identity politics in the Muslim world precisely because it is so nearly indistinguishable from conventional finance. The choice of Islamic financial products—at least in plural banking systems such as those found in Indonesia—is therefore a window into the ways in which social and economic changes are filtered through religion to yield concrete changes in the lives for millions of Muslims. These findings are also a window into a set of questions that the literature on Islamic finance has only begun to ask, and are an interesting parallel to existing research on the origins of Islamic economics and Islamic finance, which Kuran (2004) has argued lie in a set of social, political, and economic changes that began in the 1930s in the Indian subcontinent and received critical support as a consequence of the oil boom of 1970s. Much as the origins of Islamic financial institutions—the supply of Islamic finance—begin with modernization and globalization, these findings suggest that the use of Islamic financial institutions—the demand for Islamic finance—can be tied to analogous processes at work today. One cautionary note is in order for scholars of Islamic finance in other national contexts. Indonesians’ approach to Islamic finance may not be representative of all Muslims due to differences in Islamic jurisprudence across Sunni Muslim communities. Indonesian Muslims overwhelmingly follow the Shafi’i “school” (madhhab) of Islamic jurisprudence, which is predominant in Southeast Asia, East Africa, and parts of Egypt and the southern Arabian Peninsula (see Abdal-Haqq, 2002, pp. 67–74 for information on the various schools of Sunni jurisprudence). The jurisprudential traditions differ in the extent to which they accept various contract forms. Venardos (2006, p. 89), for example, argues that the Hanafi school—predominant in Turkey and Pakistan, among other countries—is far less permissive on financial transactions than the Shafi’i school. What may be considered a theologically impermissible financial arrangement by a pious Pakistani Muslim may be considered wholly Islamic by a pious Indonesian Muslim. If so, this necessitates care in generalizing about piety and banking choice to countries where other schools of Islamic jurisprudence place restrictions on the types of financial products that may be labeled Islamic. This cautionary note notwithstanding, the implications of this research for the literature on bank choice are both methodological and theoretical. Methodologically, these findings demonstrate the dangers of selection bias—starting with all consumers and then determining what characteristics they share makes it impossible to differentiate between users and nonusers. This makes it difficult to discover the factors that are common to just Islamic bank users in particular rather than those factors that are common to all Muslims, the latter being much less interesting to bankers and marketing scholars than the former. Theoretically, these findings also suggest that there are unappreciated socioeconomic and even political factors that shape individual bank choice. Fuller appreciation of these “nonbank” drivers of bank choice yields important insights into consumer demand for Islamic financial products.