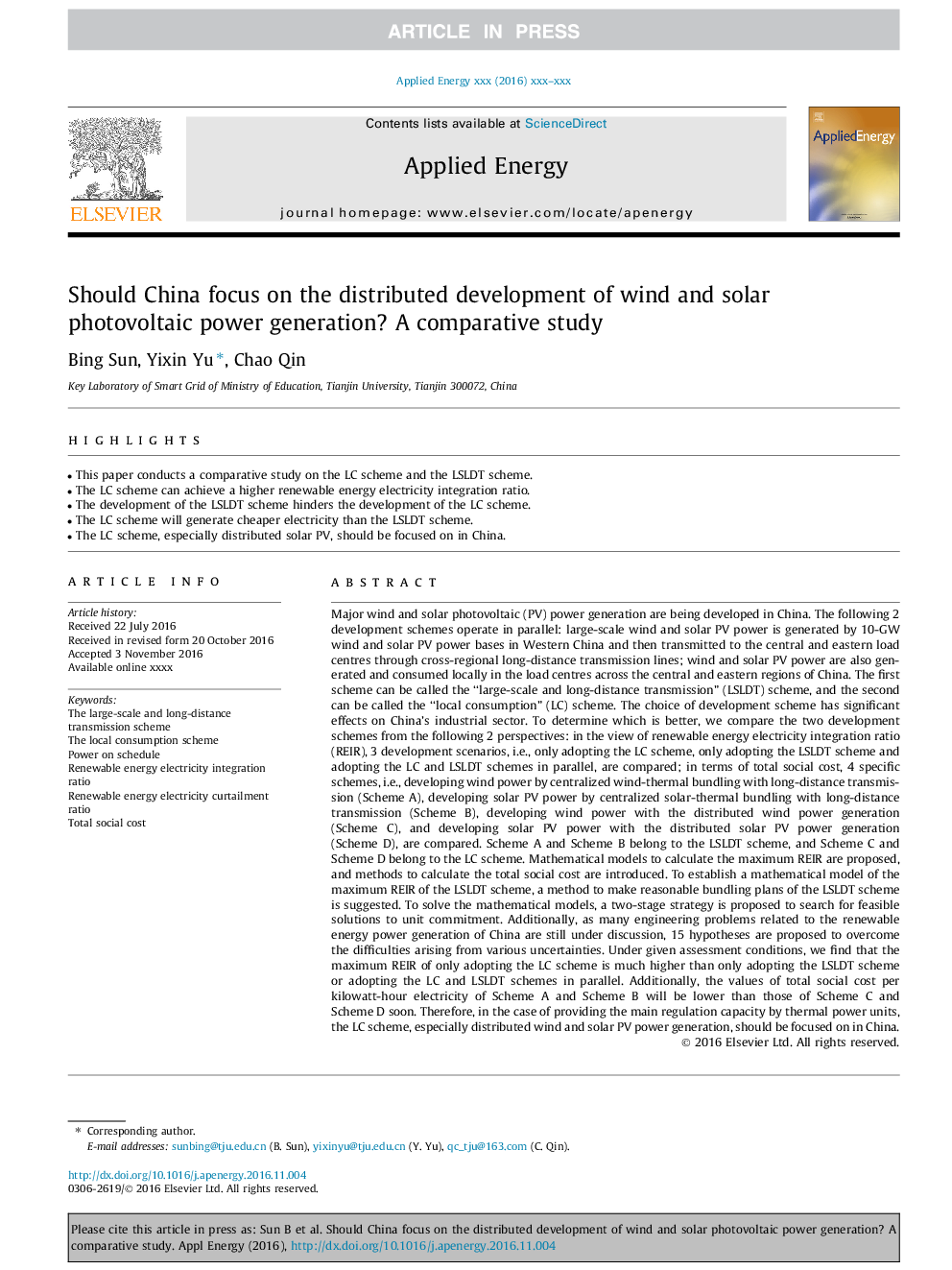 Major wind and solar photovoltaic (PV) power generation are being developed in China. The following 2 development schemes operate in parallel: large-scale wind and solar PV power is generated by 10-GW wind and solar PV power bases in Western China and then transmitted to the central and eastern load centres through cross-regional long-distance transmission lines; wind and solar PV power are also generated and consumed locally in the load centres across the central and eastern regions of China. The first scheme can be called the âlarge-scale and long-distance transmissionâ (LSLDT) scheme, and the second can be called the âlocal consumptionâ (LC) scheme. The choice of development scheme has significant effects on Chinaâs industrial sector. To determine which is better, we compare the two development schemes from the following 2 perspectives: in the view of renewable energy electricity integration ratio (REIR), 3 development scenarios, i.e., only adopting the LC scheme, only adopting the LSLDT scheme and adopting the LC and LSLDT schemes in parallel, are compared; in terms of total social cost, 4 specific schemes, i.e., developing wind power by centralized wind-thermal bundling with long-distance transmission (Scheme A), developing solar PV power by centralized solar-thermal bundling with long-distance transmission (Scheme B), developing wind power with the distributed wind power generation (Scheme C), and developing solar PV power with the distributed solar PV power generation (Scheme D), are compared. Scheme A and Scheme B belong to the LSLDT scheme, and Scheme C and Scheme D belong to the LC scheme. Mathematical models to calculate the maximum REIR are proposed, and methods to calculate the total social cost are introduced. To establish a mathematical model of the maximum REIR of the LSLDT scheme, a method to make reasonable bundling plans of the LSLDT scheme is suggested. To solve the mathematical models, a two-stage strategy is proposed to search for feasible solutions to unit commitment. Additionally, as many engineering problems related to the renewable energy power generation of China are still under discussion, 15 hypotheses are proposed to overcome the difficulties arising from various uncertainties. Under given assessment conditions, we find that the maximum REIR of only adopting the LC scheme is much higher than only adopting the LSLDT scheme or adopting the LC and LSLDT schemes in parallel. Additionally, the values of total social cost per kilowatt-hour electricity of Scheme A and Scheme B will be lower than those of Scheme C and Scheme D soon. Therefore, in the case of providing the main regulation capacity by thermal power units, the LC scheme, especially distributed wind and solar PV power generation, should be focused on in China.