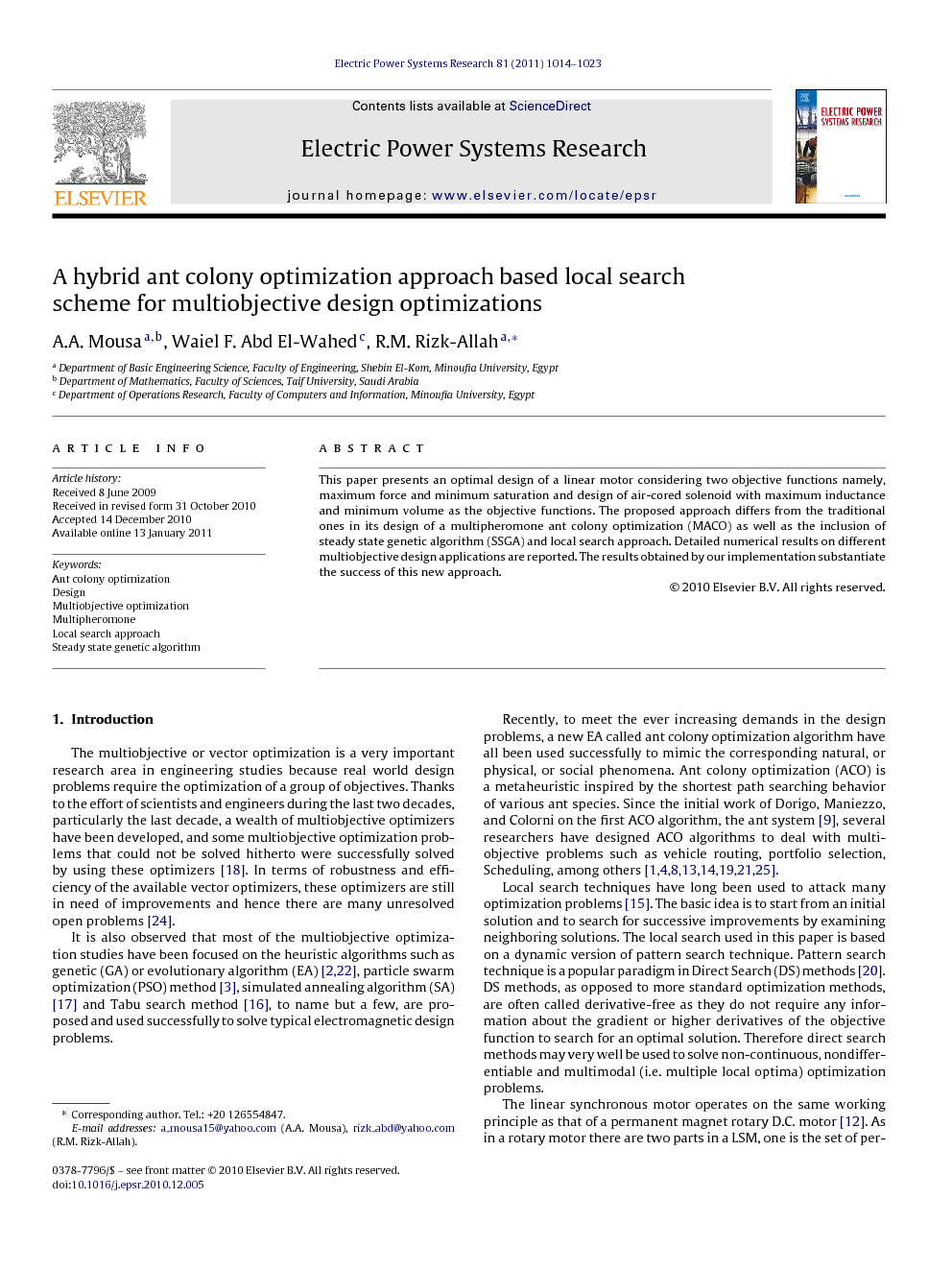 This paper presents an optimal design of a linear motor considering two objective functions namely, maximum force and minimum saturation and design of air-cored solenoid with maximum inductance and minimum volume as the objective functions. The proposed approach differs from the traditional ones in its design of a multipheromone ant colony optimization (MACO) as well as the inclusion of steady state genetic algorithm (SSGA) and local search approach. Detailed numerical results on different multiobjective design applications are reported. The results obtained by our implementation substantiate the success of this new approach.

The multiobjective or vector optimization is a very important research area in engineering studies because real world design problems require the optimization of a group of objectives. Thanks to the effort of scientists and engineers during the last two decades, particularly the last decade, a wealth of multiobjective optimizers have been developed, and some multiobjective optimization problems that could not be solved hitherto were successfully solved by using these optimizers [18]. In terms of robustness and efficiency of the available vector optimizers, these optimizers are still in need of improvements and hence there are many unresolved open problems [24]. It is also observed that most of the multiobjective optimization studies have been focused on the heuristic algorithms such as genetic (GA) or evolutionary algorithm (EA) [2] and [22], particle swarm optimization (PSO) method [3], simulated annealing algorithm (SA) [17] and Tabu search method [16], to name but a few, are proposed and used successfully to solve typical electromagnetic design problems. Recently, to meet the ever increasing demands in the design problems, a new EA called ant colony optimization algorithm have all been used successfully to mimic the corresponding natural, or physical, or social phenomena. Ant colony optimization (ACO) is a metaheuristic inspired by the shortest path searching behavior of various ant species. Since the initial work of Dorigo, Maniezzo, and Colorni on the first ACO algorithm, the ant system [9], several researchers have designed ACO algorithms to deal with multiobjective problems such as vehicle routing, portfolio selection, Scheduling, among others [1], [4], [8], [13], [14], [19], [21] and [25]. Local search techniques have long been used to attack many optimization problems [15]. The basic idea is to start from an initial solution and to search for successive improvements by examining neighboring solutions. The local search used in this paper is based on a dynamic version of pattern search technique. Pattern search technique is a popular paradigm in Direct Search (DS) methods [20]. DS methods, as opposed to more standard optimization methods, are often called derivative-free as they do not require any information about the gradient or higher derivatives of the objective function to search for an optimal solution. Therefore direct search methods may very well be used to solve non-continuous, nondifferentiable and multimodal (i.e. multiple local optima) optimization problems. The linear synchronous motor operates on the same working principle as that of a permanent magnet rotary D.C. motor [12]. As in a rotary motor there are two parts in a LSM, one is the set of permanent magnets and the other is the armature that has conductors carrying current. The permanent magnets produce a magnetic flux perpendicular to the direction of motion. The flow of current is in the direction perpendicular to both the direction of the motion and the direction of the magnetic flux. This paper intends to present an optimal design of a linear motor to replace a hydraulic actuator and design air-cored solenoid using hybrid ant colony optimization approach. This methodology consists of two phases. The first one employs the heuristic search by MACO based on SSGA to obtain near optimal solution, while the other employs efficient local search to improve the solution quality of multiobjective design optimizations. Our approach has several characteristic features. Firstly, the proposed approach implements MACO as a heuristic search technique. Secondly, SSGA is employed for enhancing the ant search. Finally, a dynamic version of pattern search technique was adopted to improve the solution quality of design problems. The remainder of the paper is organized as follows. In Section 2 we describe some preliminaries on multiobjective optimization problem (MOP). In Section 3 we review the standard ACO metaheuristic. In Section 4 we present the proposed approach. Experimental results are given and discussed in Section 5. Section 6 indicates our conclusion and notes for future work.