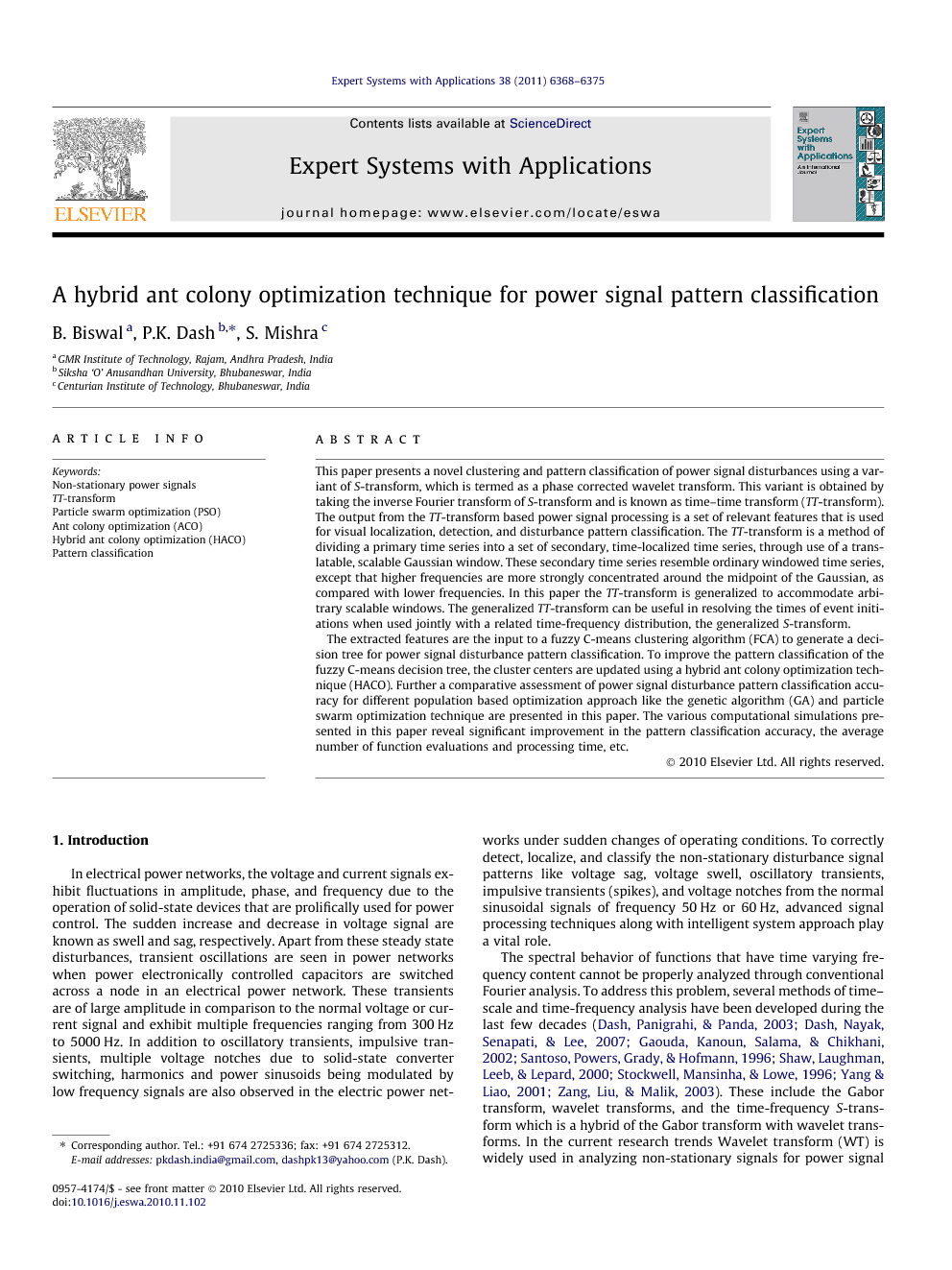 This paper presents a novel clustering and pattern classification of power signal disturbances using a variant of S-transform, which is termed as a phase corrected wavelet transform. This variant is obtained by taking the inverse Fourier transform of S-transform and is known as time–time transform (TT-transform). The output from the TT-transform based power signal processing is a set of relevant features that is used for visual localization, detection, and disturbance pattern classification. The TT-transform is a method of dividing a primary time series into a set of secondary, time-localized time series, through use of a translatable, scalable Gaussian window. These secondary time series resemble ordinary windowed time series, except that higher frequencies are more strongly concentrated around the midpoint of the Gaussian, as compared with lower frequencies. In this paper the TT-transform is generalized to accommodate arbitrary scalable windows. The generalized TT-transform can be useful in resolving the times of event initiations when used jointly with a related time-frequency distribution, the generalized S-transform. The extracted features are the input to a fuzzy C-means clustering algorithm (FCA) to generate a decision tree for power signal disturbance pattern classification. To improve the pattern classification of the fuzzy C-means decision tree, the cluster centers are updated using a hybrid ant colony optimization technique (HACO). Further a comparative assessment of power signal disturbance pattern classification accuracy for different population based optimization approach like the genetic algorithm (GA) and particle swarm optimization technique are presented in this paper. The various computational simulations presented in this paper reveal significant improvement in the pattern classification accuracy, the average number of function evaluations and processing time, etc.

In electrical power networks, the voltage and current signals exhibit fluctuations in amplitude, phase, and frequency due to the operation of solid-state devices that are prolifically used for power control. The sudden increase and decrease in voltage signal are known as swell and sag, respectively. Apart from these steady state disturbances, transient oscillations are seen in power networks when power electronically controlled capacitors are switched across a node in an electrical power network. These transients are of large amplitude in comparison to the normal voltage or current signal and exhibit multiple frequencies ranging from 300 Hz to 5000 Hz. In addition to oscillatory transients, impulsive transients, multiple voltage notches due to solid-state converter switching, harmonics and power sinusoids being modulated by low frequency signals are also observed in the electric power networks under sudden changes of operating conditions. To correctly detect, localize, and classify the non-stationary disturbance signal patterns like voltage sag, voltage swell, oscillatory transients, impulsive transients (spikes), and voltage notches from the normal sinusoidal signals of frequency 50 Hz or 60 Hz, advanced signal processing techniques along with intelligent system approach play a vital role. The spectral behavior of functions that have time varying frequency content cannot be properly analyzed through conventional Fourier analysis. To address this problem, several methods of time–scale and time-frequency analysis have been developed during the last few decades (Dash et al., 2003, Dash et al., 2007, Gaouda et al., 2002, Powers et al., 1996, Shaw et al., 2000, Stockwell et al., 1996, Yang and Liao, 2001 and Zang et al., 2003). These include the Gabor transform, wavelet transforms, and the time-frequency S-transform which is a hybrid of the Gabor transform with wavelet transforms. In the current research trends Wavelet transform (WT) is widely used in analyzing non-stationary signals for power signal disturbance (known as power quality) assessment. Although WT has been extensively used for detection of power signal disturbances, the effect of electrical noise is not adequately considered in many of the cases. In Dash et al. (2007) it is shown that when noise is present in the signal wavelet based MLP neural network performs badly in comparison with other time-frequency techniques for power quality event classification. A de-noising scheme has been proposed in reference (Yang & Liao, 2001) for enhancing wavelet based power quality monitoring system. Recently a hybrid algorithm using both WT and short-time correlation transform (STCT) (Zang et al., 2003) has been presented for the detection and classification of power quality disturbances. The main purpose of this paper to bring the recent advances, especially in S-transform (ST) to the problem of non-stationary signal analysis and pattern recognition. The first paper in the area of power quality analysis using S-transform has been published. TT-transform (Pinnegar & Mansinha, 2003), which is the inverse Fourier transform of S-transform, points to the possibility of filtering and signal to noise improvements in the time domain. After the features are extracted from the power signal disturbance time-series data using TT-transform, a clustering analysis is used to group the data into clusters and thereby identifying the class of the data. The well known C-means algorithm is commonly used for data clustering but suffers from trial and error choice of the initial cluster centers and also the noise present in the original time series. In traditional Fuzzy C-means, the program gets stuck in the local minima and, therefore, does not offer robustness in clustering the features. In this paper hybrid fuzzy C-means and ACO algorithm is used to cluster the features into distinct groups so as to classify the nature of the time series data. Ant colony optimization has been formalized into a metaheuristic for combinatorial optimization problems by Dorigo and co-workers ( Dorigo and Di Caro, 1999 and Dorigo et al., 1999). Ant colony optimization (ACO) is one of the most recent techniques for approximate optimization. The inspiriting sources of ACO algorithms are real ant colonies. More especially, ACO ( Dorigo and Gambardella, 1997, Hegarat-Mascle, 2007, Martens et al., 2007 and Su et al., 2005) is inspired by the ants foraging behavior. The ant is able to communicate with each other according to its chemical trail called “pheromone”. Information on pheromone plays an important role to judge whether a solution candidate is promising or not. Also, ACO is regarded as a multi-agent method in which the agents search the solution by a couple of strategies, out of which one is a heuristic information obtained from the problem structure, while the other is a global information that the pheromone gives. Each agent evaluates a solution path with heuristic information so that shorter paths accumulation of the pheromone recursively. The algorithm is finally combined with simulated annealing to finds better paths through the iterative process which in turn gives significantly accurate probability information in comparison to the earlier ant colony optimization. In ACO, incorporating the objective function of the simulated annealing (SA) modifies the objective function. The balance between the heuristic and pheromone information as well as the scheme of the pheromone accumulation play a key role to evaluate better solutions. It is attractive in a sense that it gives a globally optimal solution or its highly approximate ones. Experimental result showed that a good initial solution for HACO improves both the quality of the pheromones information and also the execution time. Since we require N initial solutions (random centers) to form N clusters. ACO optimizes the Euclidean distance of each data point from the center which helps in refining the data clusters, hence the change in energy for different configurations (arrangement of molecules) in SA is analogous to dij, the weighted Euclidean distance between center i and the data point j in ACO. A critical part of the SA algorithm is the annealing schedule, which determines the manner in which the temperature is decreased. The decrease in temperature in SA is analogous to the pheromone concentration τij, associated with the path joining center i and data points j in ACO.

The time frequency plot of the TT-transform has significant potential in classifying the power signal waveforms. Our Hybrid Ant Colony Optimization (HACO) based Fuzzy C-means algorithm is a robust pattern classifier and has achieved higher pattern recognition accuracy in classifying various power signal disturbances. In comparison to PSO based Fuzzy C-means algorithm, the HACO based Fuzzy C-means algorithm shows that the updated centers in the former lie far away from the respective clusters, whereas the updated centers of the later lies either inside or very close to the respective clusters. In HACO local search is embedded into Fuzzy C-means algorithm to escape from local optima and ameliorate the search performance. From the simulation results, it is found that the proposed algorithm can improve search performance and outperform the existing algorithms in classifying power signal disturbance patterns. Further the proposed approach can be applied to many different kinds of clustering problems or combined with some other data mining techniques for getting more promising results.