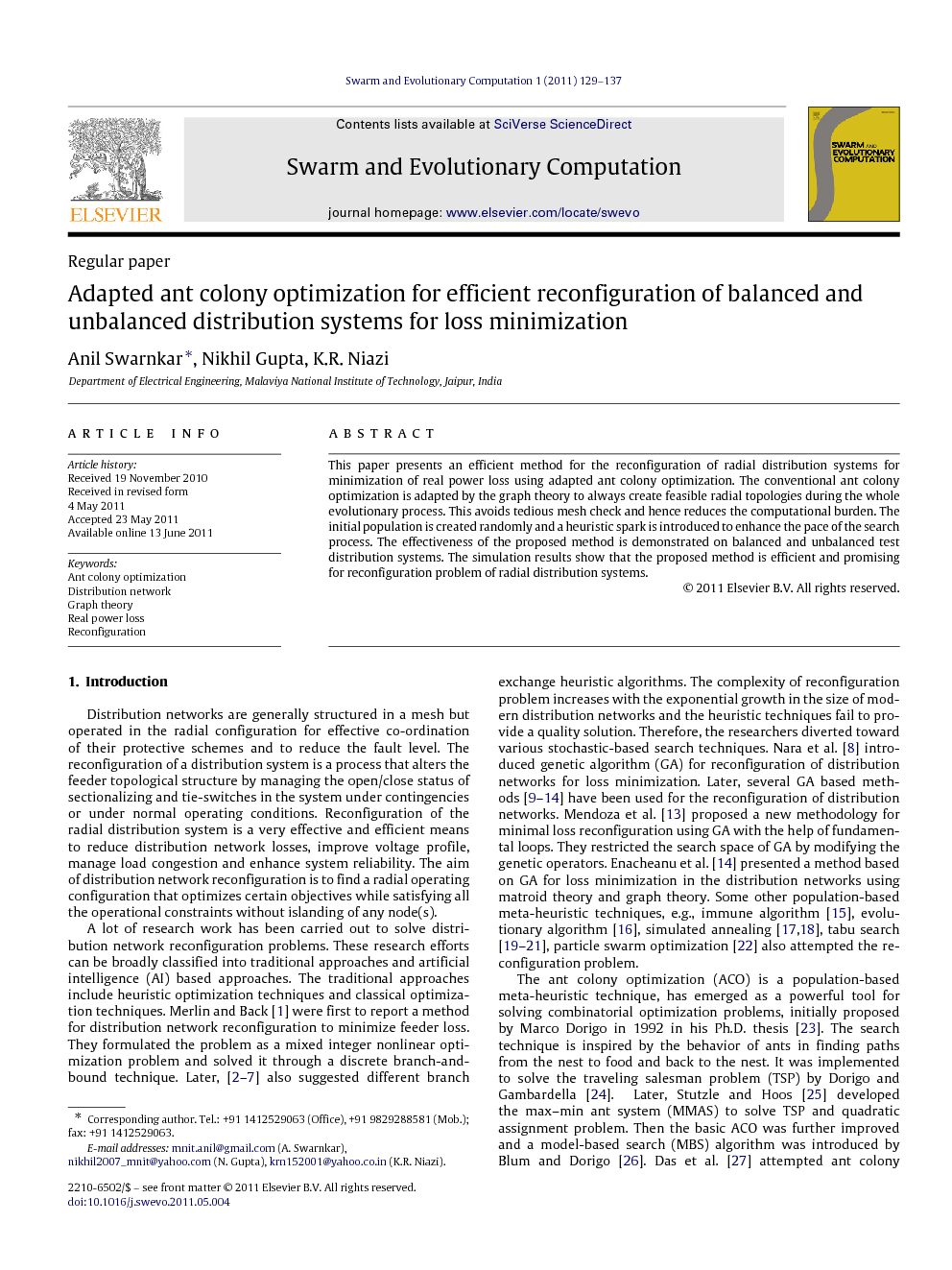 This paper presents an efficient method for the reconfiguration of radial distribution systems for minimization of real power loss using adapted ant colony optimization. The conventional ant colony optimization is adapted by the graph theory to always create feasible radial topologies during the whole evolutionary process. This avoids tedious mesh check and hence reduces the computational burden. The initial population is created randomly and a heuristic spark is introduced to enhance the pace of the search process. The effectiveness of the proposed method is demonstrated on balanced and unbalanced test distribution systems. The simulation results show that the proposed method is efficient and promising for reconfiguration problem of radial distribution systems.

The reconfiguration of distribution networks is assuming significant importance in the context of modern distribution systems. In this paper, a new codification for the population-based meta-heuristic techniques to solve reconfiguration problem of distribution networks is presented. In the proposed method, the topological concepts of the loop vectors, common branch vectors and prohibited group vectors have been introduced with the help of graph theory and some rules are framed to avoid the generation of infeasible individuals during each stage of the proposed AACO. The importance of each of these rules while randomly creating the initial population of 100 individuals can be observed from Table 7. It can be depicted from the table that the number of infeasible individuals as well as the computation time for the initialization is reduced when these rules are incorporated subsequently. Therefore, these rules not only provide flexibility to initialize the search process by random selection but also generate only feasible individuals. This preserves the diversity for the search process. It can be concluded from the table that the importance of these rules increases with the increase in the size of the distribution systems.These rules also correct the infeasible individuals, whenever appear during the evolution process. The average computation time required to correct infeasible individuals is shown in Table 8. In fact, the proposed rules guarantee to generate only feasible radial topologies throughout the evolutionary process, irrespective of the size of the distribution system.The proposed method incorporates the advantages of heuristics to increase the pace of the search technique. The introduction of the HS in the initial population reduces the computation time significantly. Various parameters of the conventional ACO are redefined in the context of the reconfiguration of the distribution networks. The objective function for the loss minimization is optimized using the proposed AACO for balanced and unbalanced distribution systems. The simulation results show that the method provides a promising tool for the reconfiguration problem of distribution network and can be extended to incorporate multi-objective problem without any significant computational burden. The proposed codification can be investigated in other advanced versions of ACOs and other population-based search techniques as a future work.