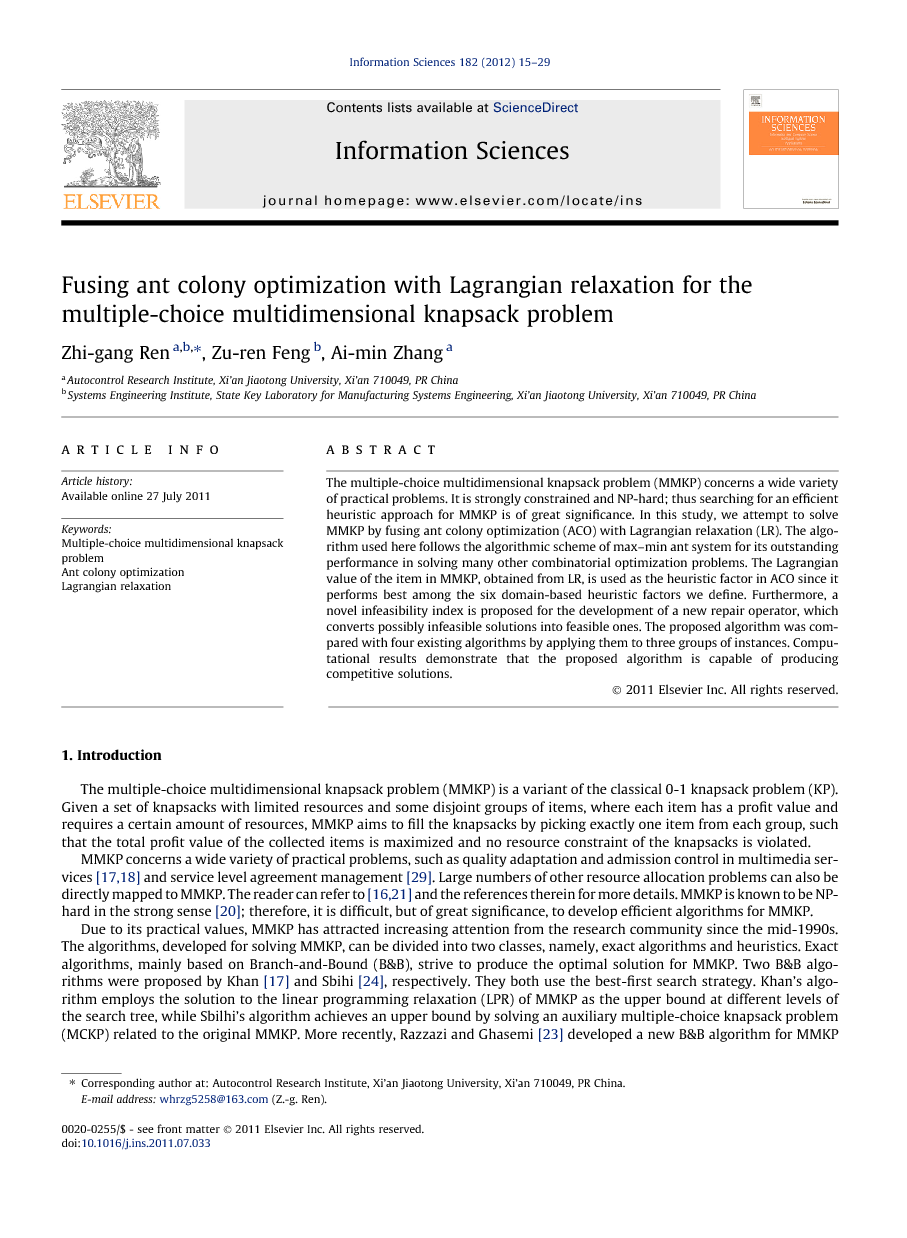 The multiple-choice multidimensional knapsack problem (MMKP) concerns a wide variety of practical problems. It is strongly constrained and NP-hard; thus searching for an efficient heuristic approach for MMKP is of great significance. In this study, we attempt to solve MMKP by fusing ant colony optimization (ACO) with Lagrangian relaxation (LR). The algorithm used here follows the algorithmic scheme of max–min ant system for its outstanding performance in solving many other combinatorial optimization problems. The Lagrangian value of the item in MMKP, obtained from LR, is used as the heuristic factor in ACO since it performs best among the six domain-based heuristic factors we define. Furthermore, a novel infeasibility index is proposed for the development of a new repair operator, which converts possibly infeasible solutions into feasible ones. The proposed algorithm was compared with four existing algorithms by applying them to three groups of instances. Computational results demonstrate that the proposed algorithm is capable of producing competitive solutions.

In this paper, a hybrid algorithm named AL-MMKP is presented. It solves the multiple-choice multidimensional knapsack problem by fusing ant colony optimization (ACO) with Lagrangian relaxation (LR). Two solution construction methods, the single-group-oriented method and the multiple-group-oriented method, are designed for ACO, and it is found that the single-group-oriented method can generate solutions more efficiently. AL-MMKP employs the Lagrangian value of the item obtained from LR as the default heuristic factor, since the Lagrangian value implicates the information from both optimization objective and constraints, and performs best among the six domain-based heuristic factors we define. In addition, an effective repair operator is developed to tackle possible infeasible solutions generated by ants. We compared AL-MMKP with four existing algorithms. Computational results indicate that AL-MMKP performs better than the existing algorithms, excluding MRLS. The key feature that makes MRLS competitive is its tabu list management mechanism. We may attempt to include such a mechanism in AL-MMKP in our future research. The work done in this study also demonstrates the feasibility of fusing ACO with LR, and their high potential in solving hard, strongly constrained combinatorial optimization problems.