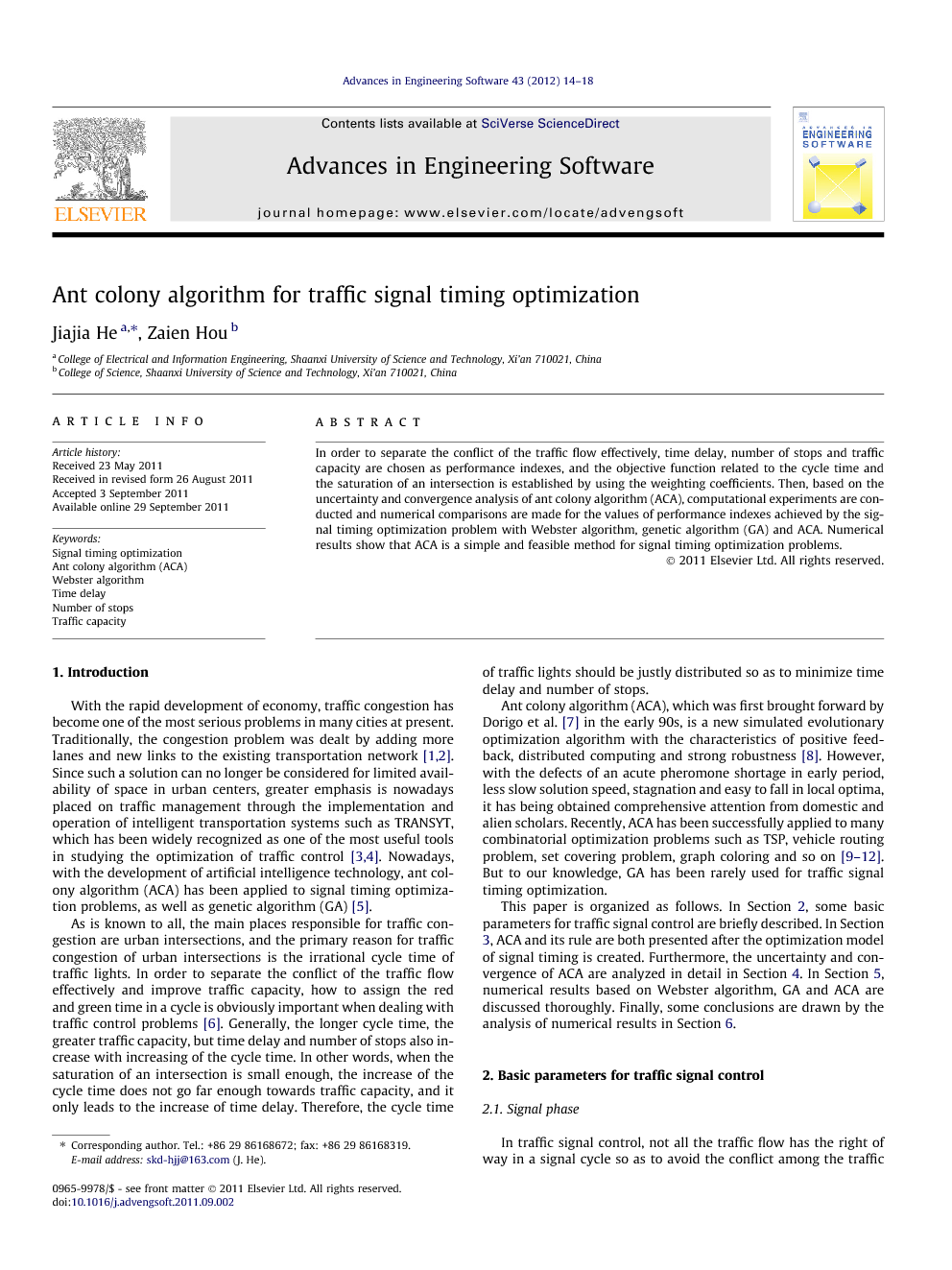 In order to separate the conflict of the traffic flow effectively, time delay, number of stops and traffic capacity are chosen as performance indexes, and the objective function related to the cycle time and the saturation of an intersection is established by using the weighting coefficients. Then, based on the uncertainty and convergence analysis of ant colony algorithm (ACA), computational experiments are conducted and numerical comparisons are made for the values of performance indexes achieved by the signal timing optimization problem with Webster algorithm, genetic algorithm (GA) and ACA. Numerical results show that ACA is a simple and feasible method for signal timing optimization problems.

With the rapid development of economy, traffic congestion has become one of the most serious problems in many cities at present. Traditionally, the congestion problem was dealt by adding more lanes and new links to the existing transportation network [1] and [2]. Since such a solution can no longer be considered for limited availability of space in urban centers, greater emphasis is nowadays placed on traffic management through the implementation and operation of intelligent transportation systems such as TRANSYT, which has been widely recognized as one of the most useful tools in studying the optimization of traffic control [3] and [4]. Nowadays, with the development of artificial intelligence technology, ant colony algorithm (ACA) has been applied to signal timing optimization problems, as well as genetic algorithm (GA) [5]. As is known to all, the main places responsible for traffic congestion are urban intersections, and the primary reason for traffic congestion of urban intersections is the irrational cycle time of traffic lights. In order to separate the conflict of the traffic flow effectively and improve traffic capacity, how to assign the red and green time in a cycle is obviously important when dealing with traffic control problems [6]. Generally, the longer cycle time, the greater traffic capacity, but time delay and number of stops also increase with increasing of the cycle time. In other words, when the saturation of an intersection is small enough, the increase of the cycle time does not go far enough towards traffic capacity, and it only leads to the increase of time delay. Therefore, the cycle time of traffic lights should be justly distributed so as to minimize time delay and number of stops. Ant colony algorithm (ACA), which was first brought forward by Dorigo et al. [7] in the early 90s, is a new simulated evolutionary optimization algorithm with the characteristics of positive feedback, distributed computing and strong robustness [8]. However, with the defects of an acute pheromone shortage in early period, less slow solution speed, stagnation and easy to fall in local optima, it has being obtained comprehensive attention from domestic and alien scholars. Recently, ACA has been successfully applied to many combinatorial optimization problems such as TSP, vehicle routing problem, set covering problem, graph coloring and so on [9], [10], [11] and [12]. But to our knowledge, GA has been rarely used for traffic signal timing optimization. This paper is organized as follows. In Section 2, some basic parameters for traffic signal control are briefly described. In Section 3, ACA and its rule are both presented after the optimization model of signal timing is created. Furthermore, the uncertainty and convergence of ACA are analyzed in detail in Section 4. In Section 5, numerical results based on Webster algorithm, GA and ACA are discussed thoroughly. Finally, some conclusions are drawn by the analysis of numerical results in Section 6.

In this paper, a more efficient algorithm based on ACA is introduced and applied to the traffic signal timing optimization, which can preferably make time delay smaller, number of stops fewer and traffic capacity larger. Moreover, the results show that ACA has more superiority than Webster algorithm and GA when dealing with signal timing optimization problems, and the optimal solutions can be obtained effectively. Therefore, ACA has broad application prospects in the field of traffic signal control.