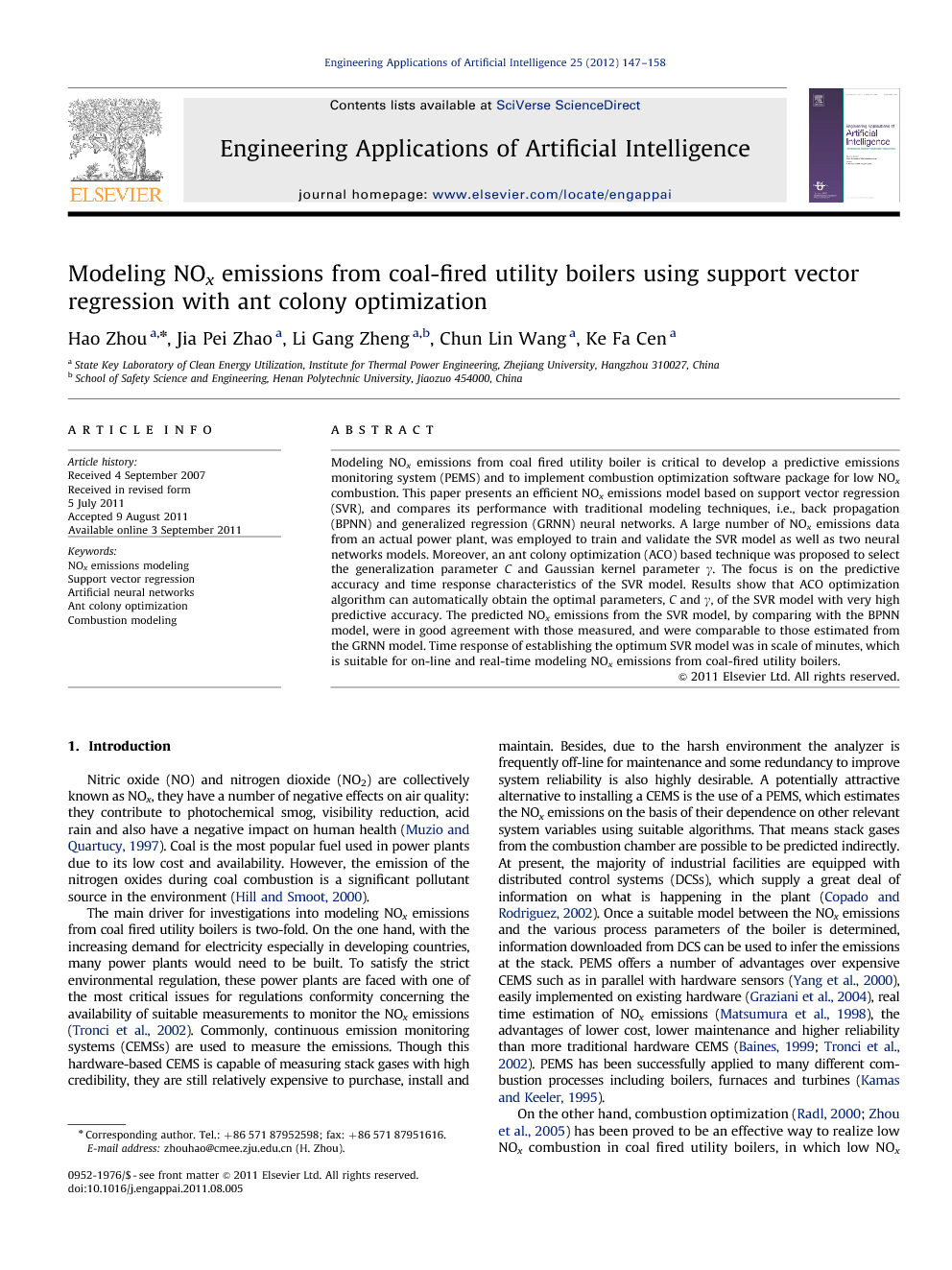 Modeling NOx emissions from coal fired utility boiler is critical to develop a predictive emissions monitoring system (PEMS) and to implement combustion optimization software package for low NOx combustion. This paper presents an efficient NOx emissions model based on support vector regression (SVR), and compares its performance with traditional modeling techniques, i.e., back propagation (BPNN) and generalized regression (GRNN) neural networks. A large number of NOx emissions data from an actual power plant, was employed to train and validate the SVR model as well as two neural networks models. Moreover, an ant colony optimization (ACO) based technique was proposed to select the generalization parameter C and Gaussian kernel parameter γ. The focus is on the predictive accuracy and time response characteristics of the SVR model. Results show that ACO optimization algorithm can automatically obtain the optimal parameters, C and γ, of the SVR model with very high predictive accuracy. The predicted NOx emissions from the SVR model, by comparing with the BPNN model, were in good agreement with those measured, and were comparable to those estimated from the GRNN model. Time response of establishing the optimum SVR model was in scale of minutes, which is suitable for on-line and real-time modeling NOx emissions from coal-fired utility boilers.

In this paper, different models for the estimation of NOx emissions, obtained on the basis of data acquired on the output of an actual power plant, were introduced and their estimation capabilities were described. In particular, the performance (the predictive capability and the time response) of SVR model were compared to those of both BPNN and GRNN models. Because of its universal approximation ability, SVR can be used to model nonlinear processes. Choosing optimal parameters for the models is an important step in the modeling stage. ACO optimization in combination with the holdout method is a reliable way to determine the optimal model parameters, referred to as ACO–SVR. Compared to the widely used grid search method for selection of parameters pair (C, γ), ACO–SVR needs less computing time and shows slightly better predictive accuracy. Additionally, the ACO–SVR can automatically select the optimal model parameters without any manual operation. The model obtained this way was found to have good generalization property. 92% of cases in test data D2 had the relative error smaller than 5%. The predictive accuracy, characterized by mean relative error MRE and correlation coefficient R, and the time response characteristics of the ACO–SVR model are greatly dependent on the product of the population m and the maximum iterations G. The monotonic relations found between them can help us to make the tradeoff. The optimization procedure with the population m=5 and the maximum iterations G=30 took 164 s to obtain a sufficiently accurate SVR model for NOx emissions. The computing time in scale of less than 3 min is suitable for on-line and real-time building of the SVR model. Comparative study shows that the SVR model demonstrated much better performance than the BPNN model in terms of the predictive accuracy and the model robustness. SVR model also presented slightly better predictive accuracy than the GRNN model. The main advantage of the SVR model over the GRNN model is that the former can be incorporated into optimization algorithms such as ACO and GA to regulate the inputs of model to achieve the expected NOx emissions, which is the basic idea of combustion optimization to reduce NOx emissions from coal-fired power plants.