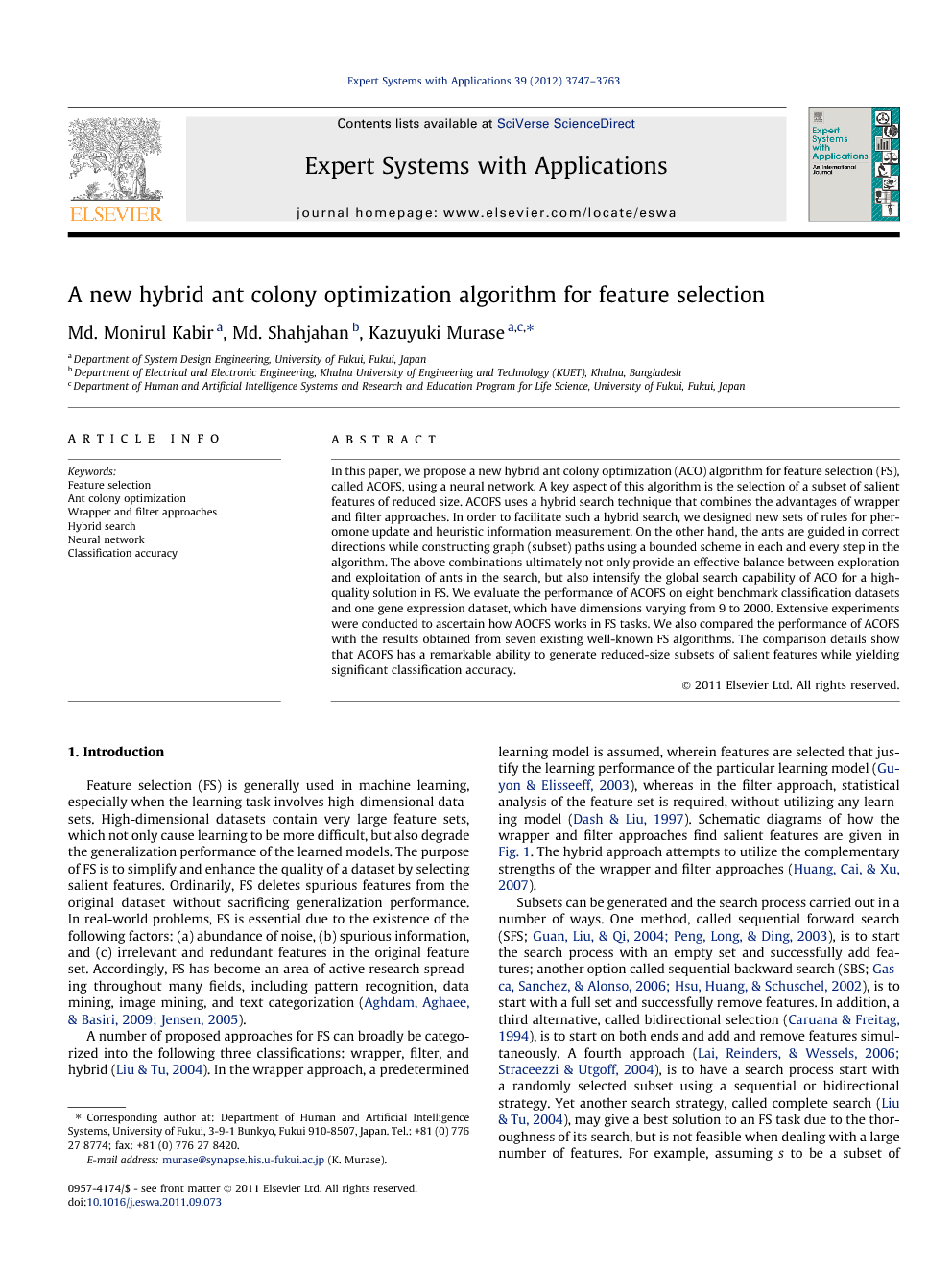 In this paper, we propose a new hybrid ant colony optimization (ACO) algorithm for feature selection (FS), called ACOFS, using a neural network. A key aspect of this algorithm is the selection of a subset of salient features of reduced size. ACOFS uses a hybrid search technique that combines the advantages of wrapper and filter approaches. In order to facilitate such a hybrid search, we designed new sets of rules for pheromone update and heuristic information measurement. On the other hand, the ants are guided in correct directions while constructing graph (subset) paths using a bounded scheme in each and every step in the algorithm. The above combinations ultimately not only provide an effective balance between exploration and exploitation of ants in the search, but also intensify the global search capability of ACO for a high-quality solution in FS. We evaluate the performance of ACOFS on eight benchmark classification datasets and one gene expression dataset, which have dimensions varying from 9 to 2000. Extensive experiments were conducted to ascertain how AOCFS works in FS tasks. We also compared the performance of ACOFS with the results obtained from seven existing well-known FS algorithms. The comparison details show that ACOFS has a remarkable ability to generate reduced-size subsets of salient features while yielding significant classification accuracy.

In this paper, an efficient hybrid ACO-based FS algorithm has been presented. Since ants are the foremost strength of an ACO algorithm, guiding the ants in the correct directions is a critical requirement for high-quality solutions. Accordingly, ACOFS guides ants during SC by determining the subset size. Furthermore, new sets of pheromone update and heuristic information measurement rules for individual features bring out the potential of the global search capability of ACOFS. Extensive experiments have been carried out in this paper to evaluate how well ACOFS has performed in finding salient features on different datasets (see Table 3). It is observed that a set of high-quality solutions for FS was found from small, medium, large, and very large dimensional datasets. The results of the low standard deviations of the average classification accuracies, as well as the average number of selected features, showed the robustness of this algorithm. On the other hand, in comparison with seven prominent FS algorithms (see Table 17 and Table 18), with only a few exceptions, ACOFS outperformed the others in terms of a reduced number of selected features and best classification performances. Furthermore, the estimated computational complexity of this algorithm reflected that incorporation of several techniques did not increase the computational cost during FS in comparison with other ACO-based FS algorithms (see Section 3.5). We can see that there are a number of areas where ACOFS failed to improve performances in terms of number of selected features and classification accuracies. Accordingly, more suitable heuristic schemes are necessary in order to guide the ants appropriately. In the current implementation, ACOFS has a number of some user-specified parameters, given in Table 2, which are common in the field of ACO algorithm using NNs for FS. Further tuning of the user-specified parameters related to ACO provides some scope for further investigations in the future. On the other hand, among these parameters, μ, used in determining the subset size, was sensitive to moderate change, according to our observations. One of the future improvements to ACOFS could be to reduce the number of parameters, or render them adaptive.