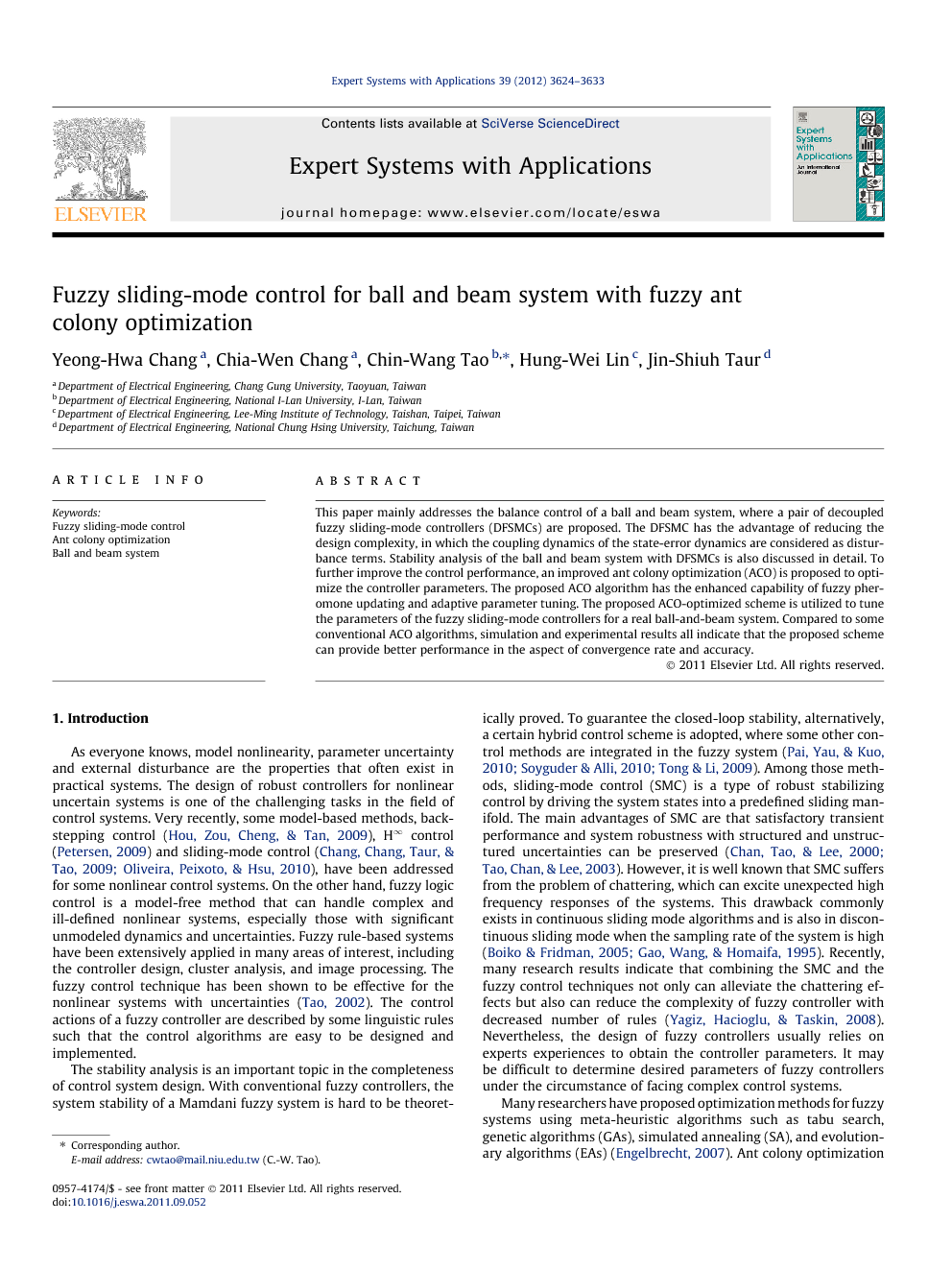 This paper mainly addresses the balance control of a ball and beam system, where a pair of decoupled fuzzy sliding-mode controllers (DFSMCs) are proposed. The DFSMC has the advantage of reducing the design complexity, in which the coupling dynamics of the state-error dynamics are considered as disturbance terms. Stability analysis of the ball and beam system with DFSMCs is also discussed in detail. To further improve the control performance, an improved ant colony optimization (ACO) is proposed to optimize the controller parameters. The proposed ACO algorithm has the enhanced capability of fuzzy pheromone updating and adaptive parameter tuning. The proposed ACO-optimized scheme is utilized to tune the parameters of the fuzzy sliding-mode controllers for a real ball-and-beam system. Compared to some conventional ACO algorithms, simulation and experimental results all indicate that the proposed scheme can provide better performance in the aspect of convergence rate and accuracy.

As everyone knows, model nonlinearity, parameter uncertainty and external disturbance are the properties that often exist in practical systems. The design of robust controllers for nonlinear uncertain systems is one of the challenging tasks in the field of control systems. Very recently, some model-based methods, backstepping control (Hou, Zou, Cheng, & Tan, 2009), H∞ control (Petersen, 2009) and sliding-mode control (Chang et al., 2009 and Oliveira et al., 2010), have been addressed for some nonlinear control systems. On the other hand, fuzzy logic control is a model-free method that can handle complex and ill-defined nonlinear systems, especially those with significant unmodeled dynamics and uncertainties. Fuzzy rule-based systems have been extensively applied in many areas of interest, including the controller design, cluster analysis, and image processing. The fuzzy control technique has been shown to be effective for the nonlinear systems with uncertainties (Tao, 2002). The control actions of a fuzzy controller are described by some linguistic rules such that the control algorithms are easy to be designed and implemented. The stability analysis is an important topic in the completeness of control system design. With conventional fuzzy controllers, the system stability of a Mamdani fuzzy system is hard to be theoretically proved. To guarantee the closed-loop stability, alternatively, a certain hybrid control scheme is adopted, where some other control methods are integrated in the fuzzy system (Pai et al., 2010, Soyguder and Alli, 2010 and Tong and Li, 2009). Among those methods, sliding-mode control (SMC) is a type of robust stabilizing control by driving the system states into a predefined sliding manifold. The main advantages of SMC are that satisfactory transient performance and system robustness with structured and unstructured uncertainties can be preserved (Chan et al., 2000 and Tao et al., 2003). However, it is well known that SMC suffers from the problem of chattering, which can excite unexpected high frequency responses of the systems. This drawback commonly exists in continuous sliding mode algorithms and is also in discontinuous sliding mode when the sampling rate of the system is high (Boiko and Fridman, 2005 and Gao et al., 1995). Recently, many research results indicate that combining the SMC and the fuzzy control techniques not only can alleviate the chattering effects but also can reduce the complexity of fuzzy controller with decreased number of rules (Yagiz, Hacioglu, & Taskin, 2008). Nevertheless, the design of fuzzy controllers usually relies on experts experiences to obtain the controller parameters. It may be difficult to determine desired parameters of fuzzy controllers under the circumstance of facing complex control systems. Many researchers have proposed optimization methods for fuzzy systems using meta-heuristic algorithms such as tabu search, genetic algorithms (GAs), simulated annealing (SA), and evolutionary algorithms (EAs) (Engelbrecht, 2007). Ant colony optimization (ACO) algorithm, inspired to mathematically simulate the social behaviors of ants forage, is a population-based evolutionary computation method. Similar to GAs, ACO is also initiated with a population of candidates that randomly move in a multidimensional search space (Blum, 2005, Dorigo and Gambardella, 1997 and Dorigo et al., 1996). However, GA saves only the better generations, thus it may lead to local optima rather than the global optimum. ACO algorithms have been successfully applied to versatile combinational optimization problems, such as the traveling salesman problem (TSP) (Zhao, Wu, Zhao, & Quan, 2010), vehicle routing (Zhang & Tang, 2009), quadratic assignment problem (QAP) (Puris, Bello, & Herrera, 2010), and job-shop scheduling (Luo, Chen, Wu, & Shi, 2010). In the literatures, some ACO-based fuzzy control strategies have been proposed (Boubertakh et al., 2009, Juang and Chang, 2010, Juang and Lo, 2008 and Martinez et al., 2008), however, only the conventional ACO is utilized. In this paper we will propose an improved ACO algorithm, namely FACO, with enhanced capability of fuzzy pheromone updating, adaptive parameter tuning and resetting. In this paper, the control scheme combining with sliding-mode control and fuzzy control is proposed. The stability condition of the controlled system can be determined by Lyapunov stability theorem. Furthermore, in order to improve the control performance, the developed FACO is utilized to optimize the controller parameters. To evaluate the feasibility, the proposed control scheme is applied to a real ball and beam system. Compared with other ACO related methods, ant system (AS) (Dorigo et al., 1996), ant colony system (ACS) (Dorigo & Gambardella, 1997), max–min ant system (MMAS) (Stutzle & Hoos, 2000), the superiority of the proposed work can be evaluated from the simulation and experimental results. This paper is organized as follows. In Section 2, the mathematical model of the ball and beam system is presented. The design of fuzzy sliding-mode controllers for the ball and beam system is discussed in Section 3. Also, the selection conditions for the controller parameters are derived to preserve the system stability. The proposed FACO algorithm is described and applied to some test benchmarks in Section 4. The simulation and measurement results, including the experimental set-up, of the ball and beam systems are provided in Section 5. The concluding remarks are given in Section 6.

This paper presents an ACO-optimized fuzzy sliding control scheme for a ball and beam system. The proposed fuzzy-based ACO algorithm has the enhanced capability of pheromone updating such that the trapping of local optima can be avoided. For the design of the fuzzy sliding controller, the proposed FACO algorithm is applied to optimize the parameter settings of the input and output membership functions. Hence, improved responses of ball stabilization can be achieved. To evaluate the feasibility of the proposed control scheme, a DSP/FPGA integrated platform of a real ball and beam system is implemented. Simulation and experimental results illustrate that the FACO-based fuzzy sliding control scheme can provide better control performance subject to disturbance.