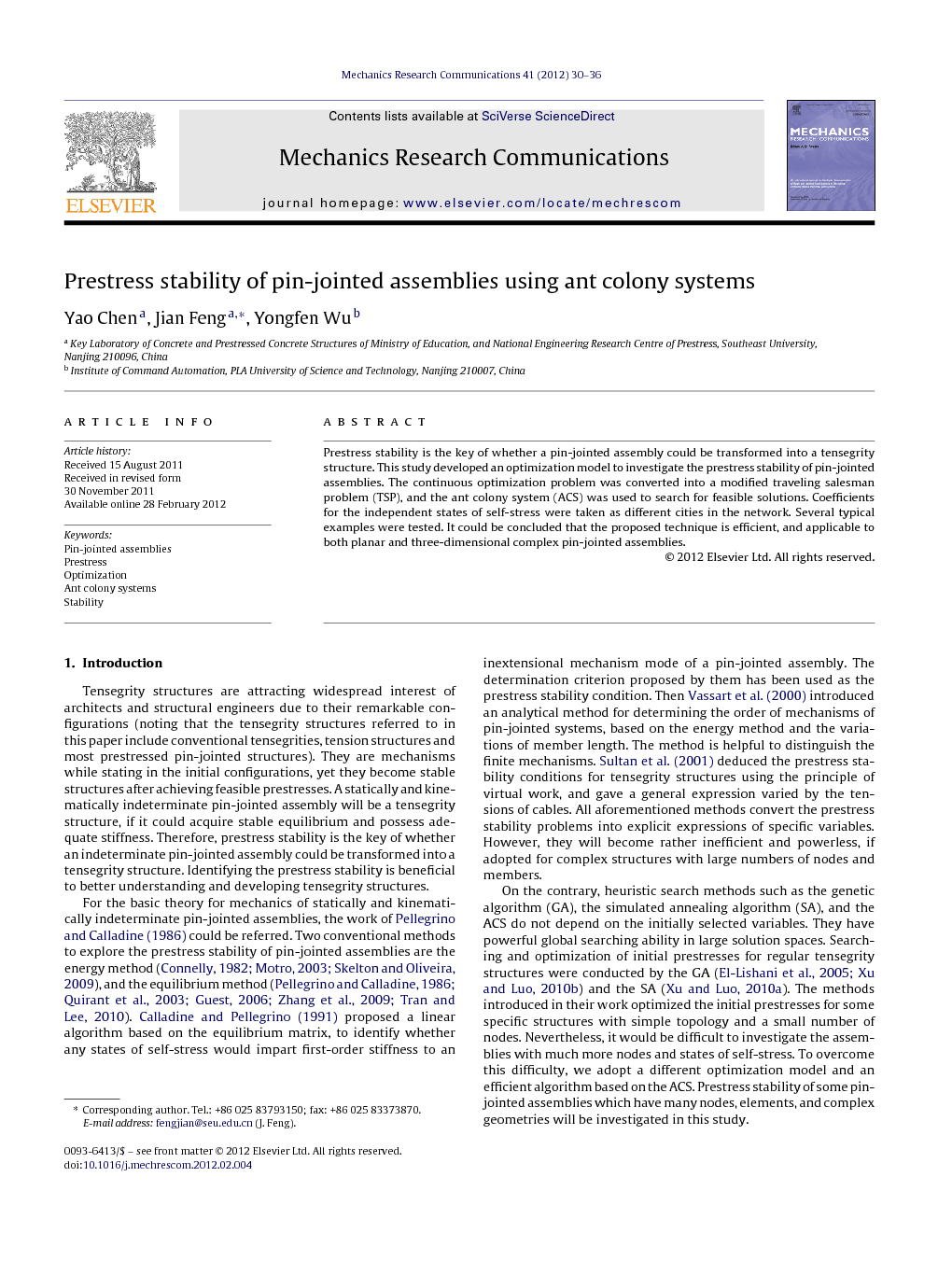 Prestress stability is the key of whether a pin-jointed assembly could be transformed into a tensegrity structure. This study developed an optimization model to investigate the prestress stability of pin-jointed assemblies. The continuous optimization problem was converted into a modified traveling salesman problem (TSP), and the ant colony system (ACS) was used to search for feasible solutions. Coefficients for the independent states of self-stress were taken as different cities in the network. Several typical examples were tested. It could be concluded that the proposed technique is efficient, and applicable to both planar and three-dimensional complex pin-jointed assemblies.

Tensegrity structures are attracting widespread interest of architects and structural engineers due to their remarkable configurations (noting that the tensegrity structures referred to in this paper include conventional tensegrities, tension structures and most prestressed pin-jointed structures). They are mechanisms while stating in the initial configurations, yet they become stable structures after achieving feasible prestresses. A statically and kinematically indeterminate pin-jointed assembly will be a tensegrity structure, if it could acquire stable equilibrium and possess adequate stiffness. Therefore, prestress stability is the key of whether an indeterminate pin-jointed assembly could be transformed into a tensegrity structure. Identifying the prestress stability is beneficial to better understanding and developing tensegrity structures. For the basic theory for mechanics of statically and kinematically indeterminate pin-jointed assemblies, the work of Pellegrino and Calladine (1986) could be referred. Two conventional methods to explore the prestress stability of pin-jointed assemblies are the energy method (Connelly, 1982, Motro, 2003 and Skelton and Oliveira, 2009), and the equilibrium method (Pellegrino and Calladine, 1986, Quirant et al., 2003, Guest, 2006, Zhang et al., 2009 and Tran and Lee, 2010). Calladine and Pellegrino (1991) proposed a linear algorithm based on the equilibrium matrix, to identify whether any states of self-stress would impart first-order stiffness to an inextensional mechanism mode of a pin-jointed assembly. The determination criterion proposed by them has been used as the prestress stability condition. Then Vassart et al. (2000) introduced an analytical method for determining the order of mechanisms of pin-jointed systems, based on the energy method and the variations of member length. The method is helpful to distinguish the finite mechanisms. Sultan et al. (2001) deduced the prestress stability conditions for tensegrity structures using the principle of virtual work, and gave a general expression varied by the tensions of cables. All aforementioned methods convert the prestress stability problems into explicit expressions of specific variables. However, they will become rather inefficient and powerless, if adopted for complex structures with large numbers of nodes and members. On the contrary, heuristic search methods such as the genetic algorithm (GA), the simulated annealing algorithm (SA), and the ACS do not depend on the initially selected variables. They have powerful global searching ability in large solution spaces. Searching and optimization of initial prestresses for regular tensegrity structures were conducted by the GA (El-Lishani et al., 2005 and Xu and Luo, 2010b) and the SA (Xu and Luo, 2010a). The methods introduced in their work optimized the initial prestresses for some specific structures with simple topology and a small number of nodes. Nevertheless, it would be difficult to investigate the assemblies with much more nodes and states of self-stress. To overcome this difficulty, we adopt a different optimization model and an efficient algorithm based on the ACS. Prestress stability of some pin-jointed assemblies which have many nodes, elements, and complex geometries will be investigated in this study.

The prestress stability plays a very important role in transforming a pin-jointed assembly into a tensegrity structure. In this paper, the continuous optimization problem of the prestress stability was converted into a modified TSP, and the ACS was proposed to search for feasible solutions. A penalty function was introduced to get the optimized prestress mode. Three typical examples of tensegrity structures, and one classical assembly with finite mechanisms were investigated. Through the examples, we can conclude that the optimized solutions obtained using the proposed method agree well with the analytical results. The proposed ACS method has a good stability of convergence. It could be adopted for identifying the infinitesimal (or finite) mechanisms for both planar and three-dimensional pin-jointed assemblies. Therefore, the proposed method provides a way different from the conventional techniques to design tensegrity structures. Numerical examples show that the parameter q0 and the number of ants are important for dealing with different assemblies. The smaller the value of q0, the stronger the searching ability of the algorithm becomes. Meanwhile, the results obtained by using many ants are much more stable. Thus, for an assembly that has few or even no feasible solutions, the probability of exploration and the number of ants should be raised to enhance the searching ability. The ACS is a new heuristic method inspired from the foraging behaviour of ant colonies in nature. Unlike the conventional methods, each run of the proposed algorithm based on the ACS could find many combinations of the states of self-stress, and correspondingly, determine whether or not they could stabilize the structure. The proposed algorithm has three major differences from the traditional TSP: there are many virtual paths from one city to another; ants visit each city by sequence; and the feasibility is assured by introducing a penalty function. Compared with the methods using the GA (El-Lishani et al., 2005 and Xu and Luo, 2010b), the proposed algorithm based on the ACS is less affected by poor initial solutions. The pheromone trail in the ACS is updated according to the global-best result, whereas the information of the optimized solution in a GA is obtained from the current generation. Thus, the proposed technique based on the ACS has a strong and global searching ability and a fast convergence speed.